The 27th African Union summit, held early last week, adopted several resolutions, one of which was to change the African Union’s funding structure. This new proposal, drafted by the former head of the African Development Bank, Dr. Donald Kaberuka, calls for a 0.2 percent levy on imports to member states with the aim of moving away from donor funding. The African Union heavily relies on foreign donors to fund its budget. In 2016, the African Union adopted a budget of $461,867,326, 41 percent of funds were provided by member states, while 59 percent were secured from international partners, notably the United States, Canada, China and the European Union.

The new import tax excludes some goods such as medicine, fertilizers, and baby foods. This levy is intended to raise the $1.2 billion required to fully fund the African Union commission and finance 25 percent of its peace support operations. As portrayed in Figure 1, imports to AU member states have increased significantly. With the recent decline of donor countries’ aid budgets, the implementation of the import tax would help the African Union finance operations.

Figure 1: Imports of goods to African Union member states, in millions of dollars 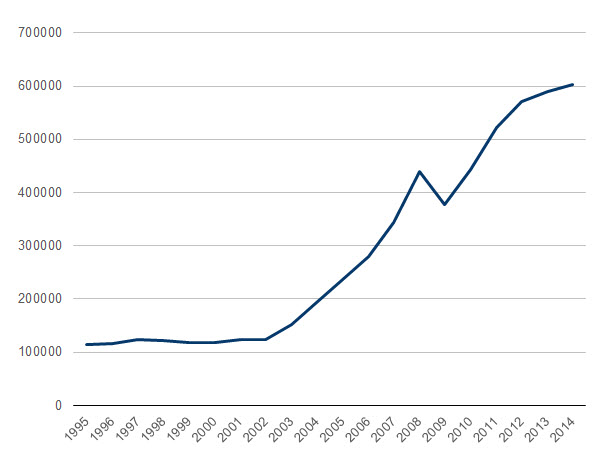 The African Union’s plan to capitalize on the increase of imports to member states has been praised by United Nations Secretary-General Ban Ki-moon who commended it for taking steps toward increasing self-reliance.  Figure 2 highlights what a 0.2 percent levy would look like and the amount that the union seeks to raise for 2016. As highlighted in the figure, if the import tax had been implemented prior to 2014, the revenue collected would not have been sufficient to raise the $1.2 billion required to fund operations. With the recent increase in imports, the African Union is now able to finance such operations through import taxation. 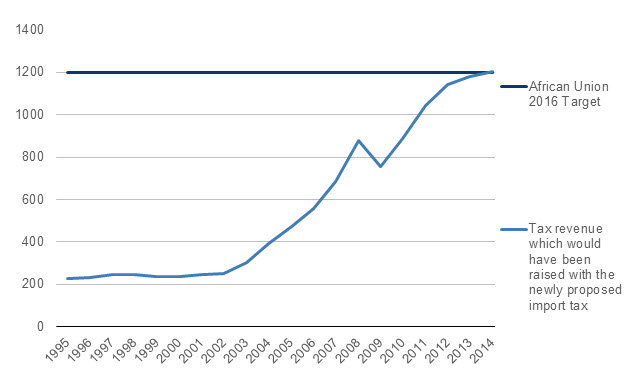 Nevertheless, there is one key caveat to the data. The full extent to which imported goods would be included and excluded from the levy is yet to be determined. Interestingly, the mechanism for collection would bypass member nation budget calculations: Revenue authorities would directly deposit the levy in the African Union’s treasury. This mechanism is currently in use within the Economic Commission for West African States regional bloc.