In 2010, Africa’s leaders gathered at the African Union in Addis Ababa to celebrate 50 years of independence. In Washington, President Barack Obama marked the occasion by hosting a town hall meeting of young African leaders from nearly 50 countries.

What looked at the time to be a curious way to mark a significant moment in the continent’s history was in fact the genesis of what could become the most innovative Obama initiative in Africa.

When asked during the session by a young woman from Mali why he had convened such a meeting, Obama said that he wanted “to communicate directly to people who may not assume that the old ways of doing business in Africa are the ways that Africa has to do business.” The president added that he wanted the young leaders to meet each other, to develop a network of like-minded people working for a better future, and to reinforce each other’s goals and aspirations.

That town hall marked the launch of the Young African Leaders Initiative (YALI). Over the next two years, YALI engaged Africa’s youth, principally through events coordinated by U.S. embassies throughout the region. Then, during a speech in 2013 in South Africa, Obama announced the establishment of the Washington Fellowship. Subsequently renamed the Mandela Washington Fellowship (MWF), the program initially was designed to bring 500 young leaders to the U.S. for six weeks of executive leadership training at U.S. universities and four days in Washington to meet with each other, leaders in the administration, and to have a town hall with the president. In 2016, the program was increased to 1,000 fellows.

When USAID put the application online for the first class of fellows in December 2013, the response was extraordinary. Nearly 50,000 applied for 500 slots. Similar numbers have applied for the two subsequent classes. Over the course of three classes of fellows, there have been 119,000 applications for 2,000 openings.

The U.S. government kept the qualifications relatively simple. Young men and women from each of sub-Saharan Africa’s 49 countries are eligible to participate, including from countries on which the U.S. has sanctions, such as Sudan, Eritrea, and Zimbabwe. Applicants generally have to be between 25 and 35, proficient in English, possess a proven record of leadership, and have a commitment to return to the continent. Fellows apply for one of three tracks: business and entrepreneurship, civic leadership, or public management.

A review of the program found that in the first cohort, the gender split was 50/50, nearly 40 percent owned a business, and a similar number ran a nonprofit organization. Eighty percent of the class had never traveled to the U.S., and more than half grew up outside capital cities.

The key element of the fellows’ program occurs during the specialized six weeks of leadership training that takes place at nearly 40 universities across the U.S. At the universities, the fellows, in cohorts of 20, are exposed not only to programs tailored specifically for their interests, but to other young Africans who share a passion for making a difference in their communities and countries. For most fellows, meeting other young Africans from different countries is one of YALI’s key benefits, as is forging genuine ties with Americans and U.S. institutions.

The narratives of the 2,000 Mandela Washington Fellows illustrate some of the most compelling stories and realities on the African continent today.

Importantly, the MWF program is cost-efficient, as the average cost of a fellow coming to the U.S. is $24,000. At least half is paid by the participating U.S. universities and a host of companies, including Coca-Cola, IBM, the MasterCard Foundation, AECOM, Microsoft, Intel, McKinsey & Company, GE, and Procter & Gamble, who have made grants or in-kind contributions to the fellowships and the YALI program.

YALI is having an impact on its participants. An initial assessment by IREX, USAID’s implementing partner, found that over 80 percent of male and female fellows who owned businesses reported an increase in earnings in the year following their fellowship in the U.S. Business fellows also leveraged more than $3 million in new sources of support through loans, grants, equity financing, and in-kind contributions.

Fellows who participated in the civic leadership training reported that the impact of their nonprofit organizations nearly tripled to over 1.6 million beneficiaries, with an average contact per fellow increasing from less than 3,000 to just fewer than 15,000 beneficiaries.

Over 80 percent of the fellows reported that they remained in contact with other fellows during the course of the year, and 70 percent indicated they continued to be involved with their host university. The ongoing connectivity is helped by the three regional conferences in Africa that USAID convenes for program alumni, more than 200 internships on the continent—most sponsored by corporate partners—as well as funding for fellows to attend conferences and other programs after they have returned to Africa.

The YALI Network (Figure 1) was established in 2013 as a means to stay connected online to the tens of thousands of young Africans who applied for the fellowship but were not selected as well as others interested in the initiative. The network, which provides access to global leaders in relevant fields and opportunities for collaboration on a range of activities, has attracted nearly 250,000 members. Participants in the RLCs and the YALI Network can earn certificates in various courses, including climate change, women’s empowerment, and the election processs. 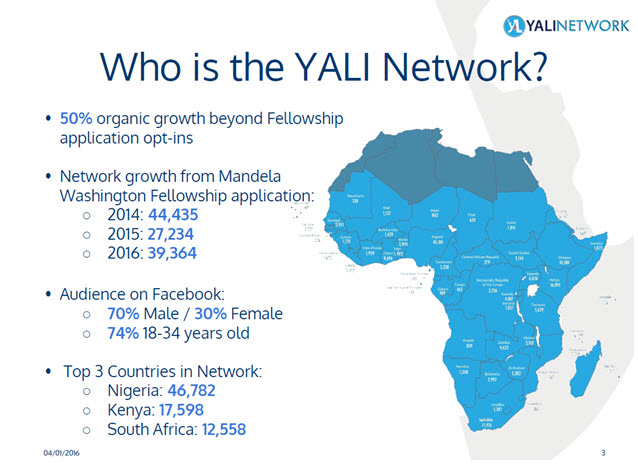 YALI, of course is not without its challenges. Recruiting from 49 countries can be exceedingly difficult, and the quality of Skype and telephone connectivity can vary significantly, which impacts the interview process. Due to the high volume of applicants, embassies have learned that they need more time to review applications. Extra efforts have been needed to accommodate fellows with disabilities. YALI’s biggest challenge, though, is winning the support of African leaders who generally have yet to embrace the program due to its unilateral launch.

YALI is a cost-efficient and effective way to invest in Africa’s future, especially as it concerns deepening trade and commerce with the region, strengthening democratic institutions and empowering civil society. If the next administration continues to invest in the program, YALI could become an enduring legacy program of the Obama administration much like the African Growth and Opportunity Act (AGOA) and the President’s Emergency Program on AIDS Relief (PEPFAR) are, respectively, for the Clinton and Bush administrations. Over time, YALI inevitably would contribute to a new generation of transformative African leadership and deeper ties between the U.S. and Africa in a way that few other programs do.

Governance in Africa: Citizen dissatisfaction is growing, and COVID-19 is likely to reverse recent gains