Last month, the world celebrated International Women’s Day
. For many, this date was an opportunity to welcome the progress made in decades to collectively help women realize their limitless potential to contribute to economic development the world over. It was also a date to continue our thinking on policies to improve gender equality. Though International Women’s Day is over, the spirit of the celebration must carry on for the rest of the year and going forward.

Around the world, women continue to record political successes. Ten years have passed since Ellen Johnson Sirleaf became the first elected female head of state in Africa after a lifetime of groundbreaking efforts to promote gender equality. Several other countries in traditionally male societies have since elected female presidents as well. An increased number of constitutional reforms underscores other successes across the globe, presenting increased opportunities for women. In Mexico, the constitutional amendment of 2014 requires gender parity in the nomination of election candidates for federal and local congressional elections. In Namibia, the renewed parliament features 41.3 percent female members, making the country fourth among African countries with the highest number of women in parliament—Rwanda with 63.8 percent, Seychelles with 43.8 percent, Senegal with 42.7 percent, and South Africa with 41.5 percent.

There has been good news on the less-publicized fronts too. All over the world gender gaps in primary and secondary education have largely  been closed, with the ratio of female to male primary and secondary enrollment rates reaching 94 percent and 97 percent respectively in 2010, and women are now more likely to be enrolled in tertiary studies than men (Kalpana Kochhar et al., 2013). As a result, over half a billion women have joined the world’s labor force over the last 30 years, with the greatest increases in women’s participation in paid work happening in the developing world (World Bank, 2012).

Despite these achievements, we still have a long way to go and cannot be satisfied as women in many parts of the world continue to suffer from exclusion in so many dimensions of their lives, especially when it comes to access to economic opportunities. Gender-based legal restrictions, such as limitations on property ownership without a husband’s consent, are significant in a number of countries: Almost 90 percent of the economies the world over have at least one such restriction; some of them have numerous legal restrictions, with some 28 countries having in place 10 or more restrictions on women participation (Gonzales et al, 2015). Moreover, men’s and women’s jobs continue to differ greatly, with more women hired for low-productivity and low-paying jobs. At the higher levels, there are only 22 women in ministerial and parliamentary roles for every 100 men worldwide (McKinsey & Company, 2015).

Fortunately, the tides of history are underway to make these electoral, educational, and other successes translate into permanent gains for women empowerment and equal opportunity.

Indeed, overcoming occupational gender bias calls for public policies aimed at lifting economic and social constraints, increasing access to finance and productive inputs for women, and addressing market and institutional failures. Despite progress over the last decade, Africa is still a part of the world where women face challenges that go beyond those faced by women in more developed other continents, but the upside is that this means there are wider opportunities for positive changes, which could lead to enhanced economic productivity and better development outcomes for African societies as a whole.

Gender gap in the labor market

Academic research supports the argument that gender gaps in the labor market can impede growth. In a study examining the relationship between two types of labor inequality (overall exclusion and exclusion from managerial positions), Esteve-Volart (2004) argues that both types of inequality could hinder economic growth. Unfortunately, in most parts of the world, these gender gaps are omnipresent in skilled occupational work with fewer women than men occupying high-skilled jobs (Figure 1). In advanced economies like the United States, around half of high-skilled workers are women. However, in most developing countries, shares of female workers in high-skilled occupations are just around 20-40 percent. In Figure 1, we illustrate how women’s participation in high-skilled jobs is relatively low in many sub-Saharan countries such as Mozambique (MOZ), Sierra Leone (SLE), Liberia (LBR), Burkina Faso (BFA), and Mali (MLI). Low representation of women in high-skilled occupations is visibly correlated with national income levels, which suggests a vicious cycle whereby the gender gap further contributes to those countries lagging behind in economic development. However, despite the fact that many empirical studies have found that gender inequality hinders growth, the effectiveness and creation of gap-reducing policies in developing countries still lag behind developed countries.

Figure 1. Gender gap in the labor market and GDP 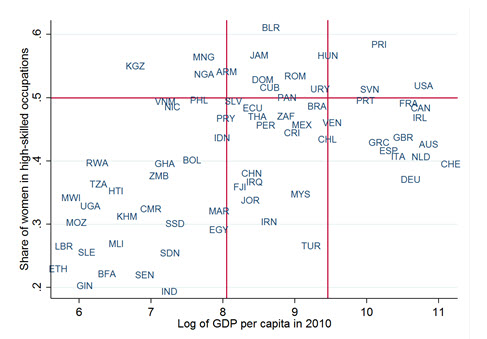 ); each entity represents a country.

The gender gap can also hold back a country’s productivity. Indeed, increased female involvement in the labor market is one major factor that boosts productivity growth (Loko and Diouf, 2009). Boosting such potential is especially timely for sub-Saharan African countries where recent empirical studies (FAO, 2011) show that equalizing access to productive resources between female and male farmers could increase agricultural output by 2.5‑4.0 percent on average. In Malawi and Ghana, for example, ensuring that female farmers had the same access as men to fertilizer and other inputs increased maize yields by 11-16 percent and 17 percent respectively on average  (Gilbert, Sakala, and Benson, 2002; Vargas Hill and Vigneri, 2014). In  Burkina Faso, analysis of data from 1981-85 of 4,700 agricultural plots shows that overall household production could have almost 6 percent higher if resources were reallocated toward women’s plots (Udry, 1996).

As Figure 2 shows, there are still big differences across the globe in female labor force participation despite progress with gender gap reduction in many parts of the world. In the U.S., for instance, the share of women in high-skilled jobs was 35 percent in 1960, which was comparable to current gender-participation levels in the Middle East, North Africa, and sub-Saharan Africa. Nowadays, however, as noted above, half of high-skilled occupations (senior officials, managers, professionals, and technicians; based on the International Standard Classification of Occupations (ISCO)) in advanced economies are women (Figure 2), suggesting that gender-reducing policies (which may also be correlated with country wealth) may have been effective in enabling women to pursue professional careers. In contrast, in the Middle East, North Africa, and sub-Saharan Africa, only about a third of workers in skilled occupations are female. Some of the gap could come from cultural differences in gender roles across continents. Moreover, even in the countries where close to 50 percent women participation rates have been achieved, the reality is that for many of the top positions (in government, corporations, military, academia, entertainment) women are far less represented than men. 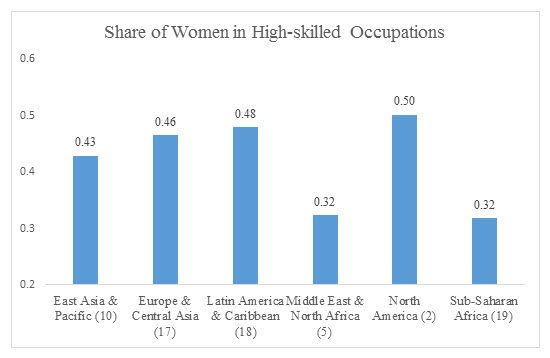 ); the number of countries for each continents are in parentheses.

In sub-Saharan Africa, studies seem to confirm that improved job opportunities for women would boost sustainable and inclusive growth. Recently, Cuberes, and Teignier (2015) examined the quantitative effects of gender gaps in entrepreneurship and labor force participation on aggregate productivity and income. They found that in sub-Saharan Africa, gender gaps cause a loss in income per capita of 11 percent. Lee (2015) focused on another aspect of gender gaps in occupational choice between agriculture and non-agriculture, and found that income per capita would increase by 33 percent if countries in sub-Saharan Africa provided more equal job opportunities. More recently, IMF (2015) provided estimates of potential gains from reducing three types of inequality (income inequality, gender inequality, and gender-related legal restrictions) in sub-Saharan Africa, which could boost the region’s average annual per capita GDP growth by almost 1 percent per year.

Other benefits can also arise in sub-Saharan Africa from improved opportunity for women in the labor market. Higher income for women could help them maintain better health, control their reproductive choices, and even reduce domestic violence against them. Women’s economic equality could be good for business too as higher purchasing power would lead to new demand for goods and services. Companies can benefit themselves from increasing leadership opportunities for women, who have been shown to increase organizational effectiveness due to the fact they are more likely to foster work place diversity and teamwork (McKinsey, 2014). Such potential synergies mean that more equal opportunities in sub-Saharan Africa might boost growth by even more than estimated by increasing the female workforce alone. Moreover, and to the extent that increased access to economic opportunities leads to greater control by women over household income and other resources, gender-reducing polices’ gains can bring wider benefits by strengthening women’s agency.

Worldwide evidence and many empirical works have shown that gender disparities can impede development outcomes. Sustained and focused public actions, therefore, could yield substantial development payoffs if they focus on reducing prevalent and persistent gender inequalities. To be more effective, policies should target various channels behind observed inequalities in the labor market. Policymakers could focus on capacity building and enhancing empowerment; scaling up physical and human capital development; and creating opportunities and financial incentives.

This blog reflects the views of the authors only and does not reflect the views of the Africa Growth Initiative. The authors would like to thank Anne-Marie Gulde-Wolf, David Robinson and his team (Christine Dieterich and Monique Newiak), and Paulo Lopes, for their helpful comments.

FAO (2011): “The State of Food and Agriculture: Women in Agriculture, closing the gender gap for development”

McKinsey & Company (2014): “GCC Women in leadership-from the first to the norm”

McKinsey & Company (2015): “The Power of Parity: How Advancing Women’s Equality Can Add $12 Trillion to Global Growth”

Udry, Christopher (1996): “Gender, Agricultural Production and the Theory of the Household,” Journal of Political Economy 104 (5)