The small middle-income countries (SMICs) in Africa represent a successful group that has experienced solid economic growth and sustained improvements across a broad range of development indicators. Recently, a moderation in growth has slowed the rise of their income towards advanced-economy levels. This has raised concerns that some of the countries may be caught in the so-called “middle-income trap.” The growth slowdown reflects both the weaker global conditions and domestic constraints. These countries thus need to adjust their policies to preserve stability, while at the same time advance on the next generation of structural reforms that will set the basis for long-term growth and a transition to advanced-economy status. 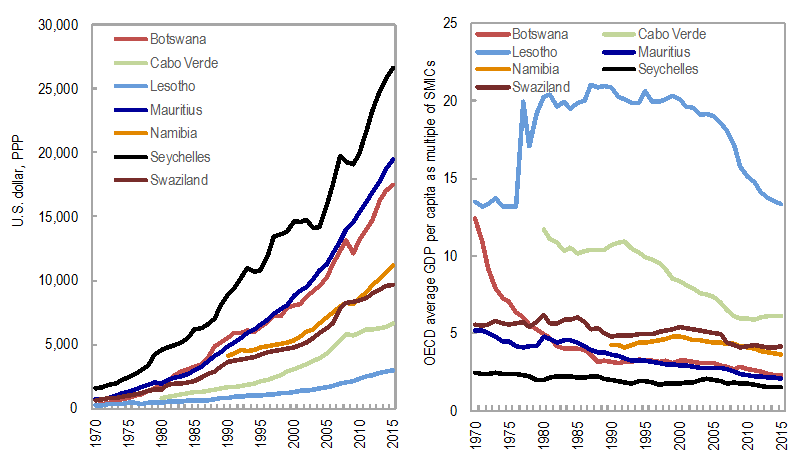 
Before the global financial crisis, growth in these countries was aided by high demand for their exports from advanced economies and emerging markets. The legacy of the crisis—a slowdown in global growth, FDI, and trade—is lasting longer than expected and having spillovers on the growth potential of these countries. More recently, commodity exporters have been hit by declining exports and a rising cost of external finance. Closer to home, countries like Botswana, Lesotho, Namibia, and Swaziland are also heavily exposed to the slowdown in the South African economy from trade channels and the decline in revenues from the customs union.

Reform needs: Moving to the next level

Faced with a decline in exports demand and the overall resource envelope, more expensive costs of external financing, and domestic constraints, the challenge SMICs face in transitioning to advanced economies is more pronounced. Recapturing the earlier growth momentum will require governments to rethink their sources of growth and accompanying policies.

Crucially, countries need to implement previously delayed structural reforms to enhance their competitiveness and resilience. Reform needs vary according to the stage of economic development: What got countries from low-income to middle-income will not necessarily take them to high-income. The reform efforts can be grouped in three broad themes:

Given multiple reform needs, countries need to prioritize and sequence reforms to maximize payoffs. The pace of reforms matters as much as the type of reforms. Similarly, there are benefits in implementing certain reforms simultaneously or in “waves.” For instance, there are synergies between labor and product markets reforms.

“Africa on the Move: Unlocking the Potential of Small Middle-Income States,” offers a number of policy options to address these challenges and realize future opportunities through the analysis of macroeconomic and structural issues. The areas covered in the book include the macroeconomic vulnerability faced by these countries; how to enhance their resilience to shocks; an assessment of how labor market outcomes can be improved; structural policies and institutional reforms that could boost productivity growth, and financial inclusion policies.

While the reform diagnostics are fairly straightforward, navigating the political economy constraints to reforms represents a thornier challenge. Political economy constraints are often the main reason reforms are delayed. For instance, labor market reform in Mauritius was initially opposed by unions concerned about the interest of their members. Eventually, negotiations between the government, employers, and unions resulted in a package that protected workers through an unemployment insurance scheme and support for job search and training. Peer learning may offer scope to share ideas on navigating the political economy to push forward the reform agenda to enable the middle-income countries to transition to advanced-economy status.