Each year, the various authors in Foresight Africa identify what they believe will be the top priorities for Africa in the upcoming year. In recent years the Brookings Africa Growth Initiative team has looked to be more inclusive not only of experts on the continent, but the citizens there too. For example, this and last year we have opened an online poll to ask the public what you believe Africa’s top priority should be.

But our poll is much less comprehensive than the recent 2015 Pew Research Center poll surveying the perspectives of people across nine African countries (Burkina Faso, Ethiopia, Ghana, Kenya, Nigeria, Senegal, South Africa, Tanzania, and Uganda) on what they believe should be the development priorities for their respective countries. While responses varied widely both within and across countries, as we feature in Foresight Africa 2016, there still was some broad, continent-wide consensus on the importance of certain issues (see Figure 1 below).

The recent Pew survey found that eight of the nine countries polled selected health care as the top issue, with a median of 38 percent of respondents across nations (and more than 40 percent in Burkina Faso, Senegal, Tanzania, and Uganda). Education received a median of 23 percent of respondents across countries, with South Africa naming it the nation’s top priority. The other issues—government effectiveness (such as reducing corruption,) supply of energy (such as electricity or petrol,) infrastructure (such as roads and bridges,) and agriculture and the supply of food received less attention on average—although government effectiveness ranked as the second-most important issue among Ethiopians, supply of energy ranked second among South Africans, and agriculture ranked second in Burkina Faso and Senegal. Figure 1 below shows both the convergence and divergence of these opinions.

Figure 1. Word from the ground: What do you think should be the most important priority for your country? 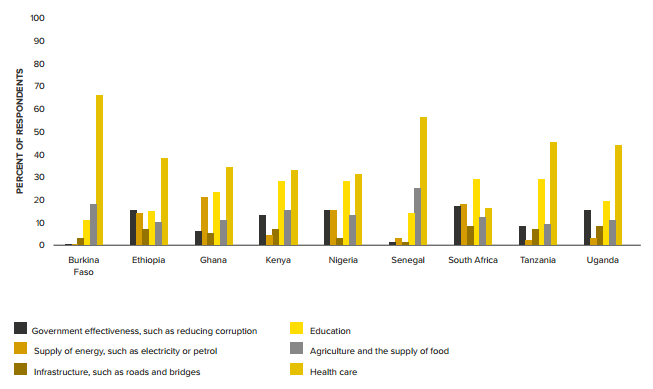 Figure 2 echoes that the people in these countries both agree and disagree on priorities. When asked whether or not certain issues pose moderately or very big problems in their countries, an average of 88 percent of respondents cited lack of employment opportunities as a major problem (with 92 percent in Ghana, Tanzania, and Senegal), and a very small range. This was true of government corruption as well. On the other hand, when it comes to energy shortages, respondents were all over the map, creating a wide range.

Figure 2. Word from the ground: Is this a very or moderately big problem in your country? 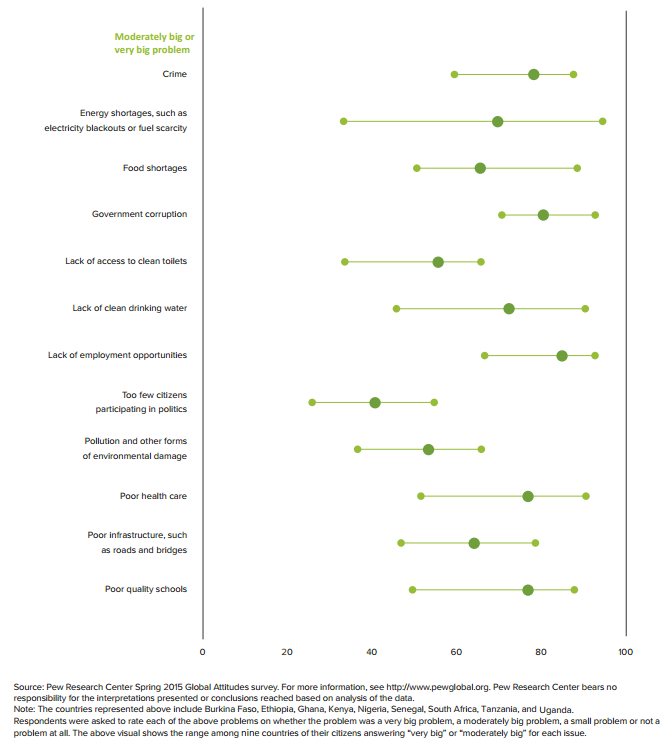 Where perceptions and needs align

Interestingly, the continent’s convergence on the significance of health and education as priority areas for development mirror some of the quantitative findings noted by Foresight Africa issue brief authors Kathleen G. Beegle and Luc Christiaensen: Health outcomes in Africa remain the worst in the world despite recent gains in life expectancy and reducing chronic malnutrition in children under 5 years old. Literacy rates are similarly disheartening—more than two out of five adults are still unable to read or write. Brookings viewpoint authors Geoffrey Gertz and Homi Kharas further demonstrate that of the 20 countries with the highest food and nutrition security needs in the world, 19 are located in sub-Saharan Africa.

For more in-depth analysis on Africa’s human development trends, make sure to read Foresight Africa: Top priorities for the continent in 2016 and join the conversation on Twitter using #ForesightAfrica.