There is a consensus in Africa that agriculture is one of the keys to achieving sustainable and inclusive growth there. Most of Africa’s population and its poor depend on agriculture, so this sector can provide potentially significant gains. Agriculture also has the potential to become one of the growth engines of the continent, help Africa’s industrialization through agro-processing and agro-business, and reduce the dependence on the services sector, which is currently the main driver of growth. Because of these advantages and despite its current low production, its high poverty, and the looming threat of climate change, Africa is uniquely placed to be a rising agricultural leader.

Indeed, Arezki, Denininger, and Selod (2012) find that a country’s attractiveness to foreign investors correlates directly to large amounts of uncultivated land with the potential to generate significant output. Now, where on planet Earth would we find such a treasure? Well, Africa accounts for about 60 percent of the world’s arable land, and most of its countries do not achieve 25 percent of their potential yield. No wonder, therefore, that there has been an increased interest on large-scale investment in agriculture in Africa, especially by China.

In light of this opportunity, China—with an already rapidly growing economic interest in the continent—has been accused of an abundance of “land grabs” in Africa. But is China really planning on badly exploiting African agriculture? Have these “land grabs” been as widespread as some critics imply? What might be the detriment to Africa? In her new book Will Africa Feed China? Deborah Brautigam discusses these questions and debunks myths around China’s interest in African land and agricultural resources as well as enters the larger discussion: How do we increase investment in African agriculture?

Africa has not yet achieved its “green revolution,” the initial jump in a region’s agricultural productivity and because of current its low cereal yields—the lowest in the world—it is experiencing a food deficit. In fact, the region spent more than $30 billion to import basic grains in 2011 according to the FAO. For every $1 it earns today in agricultural exports (mainly coffee, cotton, and cocoa), the region spends nearly $2 on agricultural imports, mainly food. Africa has a serious problem, which some countries like Ethiopia, Kenya, Niger, and Nigeria among others are addressing. Senegal has created a program that creates communal farming areas and equips 74,131 acres of farmland with infrastructure for water retention, electricity, roads, and other essentials (hyperlink in French). Côte d’Ivoire has surpassed 3 tons per hectare in cereal yields, which could be a very big deal.

Let’s assume for a moment that Africa’s green revolution happens, and that the region can feed itself. Will it then be able to feed China? The answer is that Africa will then face a second yield gap to be able to export to China: A second jump in agricultural productivity is necessary. Indeed, Chinese diets are moving more towards proteins than cereals as people become wealthier. Now as the book notes, it takes a lot of grains to generate protein: It takes two kilos of grain to produce a kilo of chicken and the ratio is four kilos for pork, and up to seven kilos for beef, as a result Africa will need to improve agricultural productivity at an even higher pace if it wants to “feed China.”

In spite of the existing yield gaps, press releases about land grabs, especially Chinese land acquisitions in Africa, have boomed recently, especially since the sharp increase in international food prices in 2007-2008 (Figure 1 from Arezki, Deininger, and Selod, 2012). These land grabs have rung alarm bells, as they raise concerns about corruption, large-scale resettlement of populations, and even a new colonization of Africa. 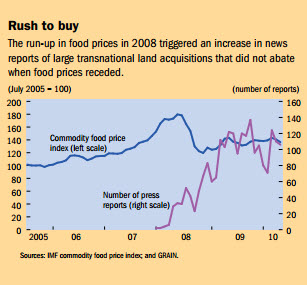 Chinese land grabs in Africa: The fiction and the facts

The increased interest by foreign investors in African land and the media in the race to it are at the core of the myths that Brautigam explores in her book. Clearly, as Figure 1 demonstrates, the number of press reports (obtained from the GRAIN database) on the land deals in Africa have spiked—but how many really translate into actual land acquisitions by China and other countries?

In order to separate fact from fiction, Brautigam painstakingly combs through press reports on Chinese land grabs in Africa. The book is a “myth buster,” as it digs deep into data and field work to cross-check the evidence on the extent and scale of the Chinese land rush in Africa, specifically exploring the following questions: Have the Chinese really acquired large areas of farmland in Africa? Is the Chinese government leading an effort to acquire land through its state-owned firms and funds? What can we really say about the assertions in the global press that “the Chinese want to grow food in Africa and send back to China” and that “Beijing plans to send its displaced farmers to Africa”?

Regardless of the land grab controversy, what is the best way to drive investment in African agriculture?

Whether Africa intends to feed itself and/or China, a crucial question is how the region will address the serious underinvestment in agriculture. In their paper, the Global Land Rush, Arezki, Deininger, and Selod (2012) document two views on this issue—both on the size of the investments that are needed. One view, held by the likes of Paul Collier, favors large-scale investments, often involving transnational purchases of land to create jobs and bring new technology to the sector. The other view favors small holder farming and points out the risks of cross-border land acquisitions—the so-called “land grabs” that neglect local rights, extract short-term profits at the cost of long-term sustainability, ignore social standards, and foster corruption on a large scale. Brautigam documents a third view, which is a middle way and involves contract farming where a large buyer enters into an agreement with small holder farmers.

These recommendations nicely complement the ones in Arezki, Deininger, and Selod (2012), who argue that a strategy to attract investors to fill the current yield gaps in Africa and allow local farmers to thrive can generate large benefits, provided local community rights are respected and investors pay a fair price for the land. However, they are quick to point out that translating potential into efficient farming activity is not easy because closing the yield gaps requires government support, including in the area of technology, institutions, and infrastructure. Their analysis also finds that countries with weak land sector governance (measured in the Institutional Profiles Database) are the ones the most attractive to investors. I quickly checked whether Chinese investments in African agriculture went to countries with low governance (using the 2015 Mo Ibrahim Index and Table 6.1, page 97 in the book) and found that it does not seem to be the case.

Though I found the book satisfying, I found myself wanting more—I would have loved to hear Brautigam’s recommendations on how China, the U.S., the EU, and other development partners can work together with African stakeholders to address the challenge of food security and nutrition in Africa (Sustainable Development Goal 2 is to achieve zero hunger by 2030), a topic some of my colleagues are working on now.

How to restore US credibility in Africa