The suspension of Madagascar’s African Growth and Opportunity Act (AGOA) privileges following its 2009 coup offers a natural experiment that allows analysts to study the impact of a tariff preference program on the recipient developing country, and then, subsequently, the impact of its removal. The situation provides two distinct but comparable states:  One with preferential access (2001-2009—the “AGOA years”) and the other without (2009-2014—the “sanction years”).

Using readily available bilateral trade data from the U.S. Department of Commerce and the U.S. International Trade Commission to investigate Madagascar’s export performance in each of those two periods generates a number of useful and interesting insights.

We find, not surprisingly, that Madagascar’s total exports to the U.S. declined following the loss of AGOA eligibility. However, a closer look at the composition of total exports shows that not all sectors were negatively affected by the sanctions. In particular, textile exports to the U.S., which surged under AGOA, fell abruptly while non-apparel and clothing exports gradually increased.

The evolution of Madagascar’s exports to the United States during the “AGOA years,” can be summarized as follows.

During the “sanction years” (during which Madagascar lost its AGOA eligibility), the textile sector drastically shrunk, and it seems that the resources and factors of production (labor) were reallocated to the rest of the economy. As a result, although total exports to the United States fell immediately following the loss of access to U.S. markets for the textile sector, they gradually expanded as non-textile exports started to increase after 2010.

These sectoral dynamics during both periods are reminiscent of the “Dutch disease.” Let us elaborate:

As one would expect, the trade sanctions had negative impacts on the Malagasy economy. Madagascar’s total exports to the United States dropped significantly—by 56 percent—following the loss of AGOA eligibility. Exports decreased from an average of $312 million per year with AGOA to an average $136 million without AGOA (see Table 1).

The data also reveal that, during the AGOA years, only 70 percent (an average of $216 million) of Madagascar’s yearly exports actually entered the United States using preferential tariffs (Figure 1). The remaining 30 percent entered on an MFN (most-favored-nation) basis (i.e., no preferences).

The quasi-totality of the Malagasy exports that entered the United States under AGOA preferences was composed of articles of apparel and clothing accessories. This concentration was strongly facilitated by the third-party fabric rule of origin, which allows least-developed AGOA beneficiaries to utilize yarn and fabric from any country. It is not surprising that when Madagascar lost its privileges, its apparel and clothing exports to the U.S. dropped sharply—by 85 percent. This sectoral concentration of benefits has some important economic implications.

While the drop in the clothing exports is quite predictable and intuitive, it is the evolution of the non-apparel and clothing exports sectors that illustrates an interesting trend. In fact, at first glance, the data seems to suggest that by generating a boom in the Malagasy apparel and clothing sector, AGOA might have inadvertently caused other important sectors to shrink. The boom has, at least partially, led to an appreciation of the ariary during the AGOA years and hurt the competitiveness of those other sectors. Actually, it is possible that AGOA may have caused some kind of Dutch disease in Madagascar.

While apparel and clothing exports boomed during the AGOA years, exports in other sectors actually decreased sharply in both absolute and relative terms (Figure 2). Non-apparel and clothing exports dropped from $119 million to $36 million between 2002 and 2009, and their share of total exports decreased from 57 percent to 15 percent. This change could have been caused by various factors, but one obvious suspect is the shift of resources and factors of production (labor) toward the booming sector, away from the (possibly more efficient) rest of the economy. As a result, total exports decreased between 2004 and 2009.

One can also find some complementary evidence of this resource movement by looking at the sanction years. It is interesting to note that total exports more than doubled, from $103 million in 2010 to an estimated $213 million in 2014, while the sanctions were in place (Figure 1). Decomposing this trend reveals that the jump in total exports was driven by non-apparel and clothing exports, which increased by 300 percent from $48 million in 2010 to an estimated $194 million in 2014 (admittedly, this was also driven by the new nickel exports). During that period, exports of apparel and clothing dropped by 65 percent. This change might suggest that when Madagascar lost its AGOA privileges, some resources and factors of production released by the shrinking textile sector might have moved to other (possibly more efficient) sectors in the rest of the economy.

Figure 2. Madagascar: Composition of exports to the United States  2000-2014, in million USD 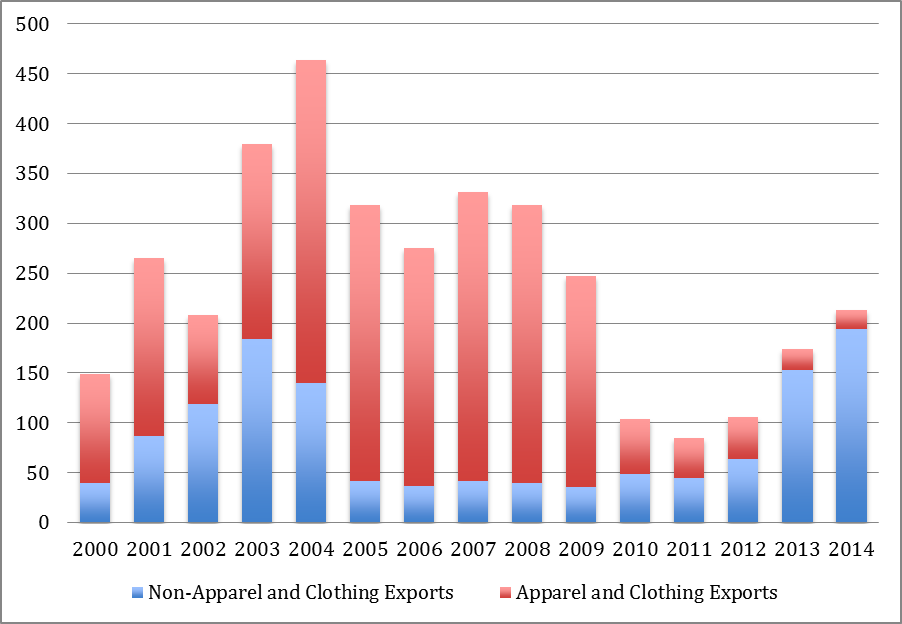 One obvious policy implication of the case of Madagascar is that trade preferences should be as comprehensive and inclusive as possible in terms of sectors. The discussion suggests that the impact of AGOA, while broadly positive, has been concentrated in too few sectors. The current focus on apparel and clothing (boosted by the third party rules of origin) can lead to perverse effects if it leads to excessive resource shifts and significant real exchange rate appreciation. The boom of the beneficiary sectors may have potentially had some unintended negative consequences on other non-beneficiary sectors in economy—possibly a Dutch disease-type of impact that can lead to undesirable overall outcomes.

Note:
These are the authors’ personal perspectives and do not necessarily reflect those of the World Bank or the Brookings Institution.