For many years, Africans have complained that the International Criminal Court (ICC) has concentrated its efforts exclusively in Africa, a process that has made a mockery of the court’s claims to bring about an end to global impunity. Some Africans have even argued that the ICC’s claims that it is helping bring about justice in Africa are not unlike those made by proponents of the colonial order established by the Berlin Conference in 1884-1885.

On Tuesday, March 11, I participated in a panel discussion entitled, “The International Criminal Court in Africa: Bias, Legitimate Objections, or Excuses for Impunity?” co-hosted by New York University’s School of Continuing and Professional Studies (SCPS), Center for Global Affairs and the International Center for Transitional Justice (ICTJ).  The program brought together experts interested in justice and peaceful coexistence in Africa to examine the role that the International Criminal Court (ICC) can play in minimizing impunity in the continent. 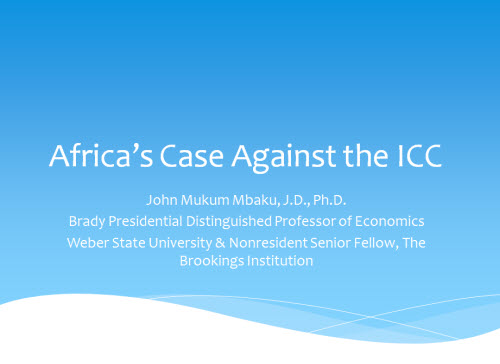 The most important conclusions from what was a robust dialogue were that (i) it is very important that African countries develop the legal and institutional capacity to deal effectively and fully with impunity and other extra-legal activities that impede human development and peaceful coexistence; (ii) the international community should help African countries develop that capacity; (iii) the ICC should make a concerted effort to open dialogue with the African Union in particular and Africans generally in order for the court to gain a better insight into African problems, while, at the same time, help Africans understand and appreciate the nature of the ICC’s work, how it functions, and why it is a critical international body in the fight against impunity; and (iv) the ICC needs to improve openness and transparency in its activities. To make the ICC a truly international court, important countries such as the United States, India, the People’s Republic of China and the Russian Federation need to be brought aboard. Obviously, more dialogue is needed and it is my hope that soon, we will be able to undertake a discussion of this type somewhere in Africa.

During my presentation, I argued that an important part of improving relations between Africa and the ICC is that Africans must take ownership of their problems and find ways to resolve them themselves. For one thing, justice is most effectively delivered locally. Hence, the first line of business is for each African country to develop the legal and institutional capacity to deal with impunity and other governance problems. External actors, notably the ICC, should only be considered conflict-resolution instruments of last resort.

The impact of COVID-19 on industries without smokestacks in Senegal

Education in emergency in Nigeria: Creating gender equitable policies so all girls have an uninterrupted right to learn