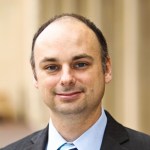 As Vice President and General Counsel, Michael Cavadel is responsible for managing Brookings’s legal affairs, mitigating legal risk and advising the Institution’s Trustees, senior executive team, and staff on a wide array of legal, managerial, and policy issues including conflicts of interest, compliance, and disputes. Michael has been with the Brookings Institution since 2012, serving most recently as Associate Vice President and Deputy General Counsel.

Prior to joining Brookings, Michael began his legal career in Philadelphia, Pennsylvania with Wolf Block LLP, an Am Law 200 law firm. He was also Assistant General Counsel at Legion Insurance Company (in Liquidation). The Legion liquidation was one of the largest insurance liquidations in United States’ history, with billions of dollars in assets distributed among tens of thousands of potential claimants.