The hysteria surrounding much of the public discussion around student loan debt does not have a strong basis in reality.  In a recent report, Beth Akers and I show that education debt levels have increased markedly over the last two decades, driven in large part by rising tuition levels and Americans obtaining more education (especially graduate degrees).  But the typical household with debt is no worse off today than a generation ago, with increases in lifetime earnings more than offsetting increases in debt, and monthly payment burdens kept manageable by longer repayment periods.

Why then is the rhetoric on student loans so far removed from reality?  If the economic position of college-educated households has improved over the last 20 years, despite large increases in debt, why have commentators and policymakers become more concerned about student debt?  One possibility is that public attention to student loans may have as much to do with who borrows as with how much they borrow.

In a previous post, Beth Akers and I showed that high-income households hold a disproportionate share of education debt.  Might the recent surge in attention paid to student loans stem in part from increases in debt among affluent households, similar to the attention Congress paid to sequestration when federal budget cuts led to flight delays out of New York and other major cities? I tackle this question by examining whether increases in debt have been concentrated among the affluent, measured using both the income of students’ families and their own income as young adults.

The figure below shows average borrowing (per academic year) for undergraduate students who are financially dependent on their parents, based on inflation-adjusted data from the nationally representative National Postsecondary Student Aid Study (NPSAS).  In 1990, students from lower-income families borrowed a bit over $1,000 per year of college (in 2012 dollars), whereas their classmates from high-income families borrowed an average of less than $500, with more than 90 percent of high-income students borrowing nothing at all. 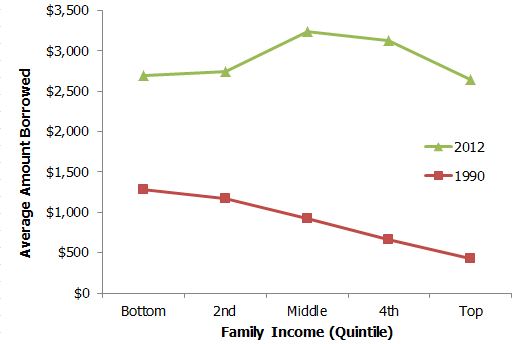 Between 1990 and 2012, borrowing to pay for college became an egalitarian affair.  Average borrowing is now about the same for the poorest and wealthiest families, at about $2,600 per year.[i] Over the past 22 years, borrowing increased across all income groups, but the increases were largest among students from wealthier families.[ii] Debt levels more than doubled among the two lowest- income quintiles, but increased more than six fold among the top-income group.  The share of students from top-income families borrowing at all increased from 7 percent in 1990 to 36 percent in 2012.

The NPSAS data clearly show how the distribution of borrowing shifted based on the income of dependent students’ families, but what about the incomes of those students themselves after they left college?  I next examine data from the Survey of Consumer Finances (SCF), a nationally representative survey of U.S. households administered by the Federal Reserve Board.  The SCF data allow me to examine how the average amount of outstanding education debt among households headed by individuals age 20-40 has changed over time.  These data will capture borrowing as well as repayment, and reflect debt incurred for college as well as graduate school.

The figure below shows that average education debt levels did not vary much by income in 1992, with average debt (in 2010 dollars) of less than $2,000 for all income groups except for the middle fifth.  An important difference between the SCF and NPSAS is that the SCF covers all U.S. households, whereas NPSAS is focused on college students.  Consequently, the fact that the data from the early 1990s differ between the two data sources reflects the fact that the SCF includes many non-borrowing individuals that had no reason to borrow because they did not attend college.[iii] 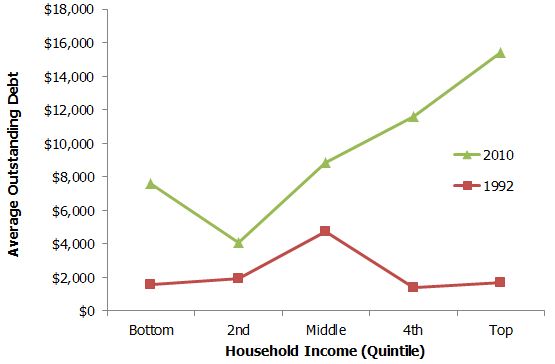 
Source: Author’s calculations from Survey of Consumer Finances 1992 and 2010.

By 2010, high-income households had accumulated a significant amount of education debt, with an average debt of over $15,000.  Debt levels increased for all income groups, but the increases were largest for the top two income groups (although the increase for the bottom group was larger than for the second or middle groups).  Put another way, the share of total outstanding education debt held by the wealthiest 20 percent of households increased from 18 percent in 1992 to 33 percent in 2010.

An era in which students from low-income families used loans to supplement grants has given way to a system dominated by the wealthiest Americans, many of whom were born to affluent parents.  This trend supports the theory that the intensification of the public debate over student loans may be due in part to the increased prevalence of debt among more affluent households.  Given the unlikely reversal of this trend, political pressure on policymakers to offer broad-based “relief” to borrowers, such as a reduction in interest rates, may continue to intensify.  Absent credible evidence that such a policy would have a large “trickle-down” effect on the broader economy, policymakers should instead focus on the core mission of the federal loan program: promoting access to higher education on terms that are fair to both students and taxpayers.

[i] These averages include students who do not borrow.  Forty-three percent of dependent students borrow, so average borrowing of about $2,900 across all income groups implies average borrowing of $6,700 per year among those that did borrow, which in turns amounts to $27,000 over four years or $33,700 over five years.  These latter figures are in the range of the typical debt loads reported for recent graduates of four-year colleges.

[iii] It is also worth noting that 20-40 year-olds in 1992 attended college at significantly earlier points in time, on average, than dependent undergraduate students surveyed by NPSAS in 1990.