The fact that teachers with master’s degrees are no more effective in the classroom, on average, than their colleagues without advanced degrees is one of the most consistent findings in education research.  In a study published in 2011, Paul Peterson and I confirmed this finding by comparing the student achievement of the same teachers before and after they earned master’s degrees, and found no impact.[1]

This finding may be non-controversial among researchers, but it has largely been ignored by policymakers.  Ninety-six percent of the 112 major U.S. school districts included in the National Council on Teacher Quality (NCTQ) Teacher Contract Database pay teachers with MA degrees more than those with BA degrees, with an average difference of $3,205 in the first year of teaching, $4,176 in the fifth year, and $8,411 at the top of the salary schedule.  The size of this pay bump varies widely, topping out at over $30,000 in three districts in Maryland.[2]

It is not surprising that teachers respond to these incentives by earning MA degrees.  In 2011-12, nearly half of U.S. teachers held such a degree.  However, it comes at a price.  As higher education costs continue to rise, teachers are going deeper into debt in order to earn these degrees.  The proportion of education MA students with graduate debt increased from 49 to 60 percent between 2004 and 2012, and median graduate debt levels increased (in constant dollars) from $27,455 to $35,350.  Factoring in undergraduate debt pushes the 2012 figure to $50,879.

In most fields, prospective students can only make an educated guess about the payoff to a post-graduate degree, but, for public school teachers, it appears in black and white on the salary schedule for their district.  For an MA degree to be worth the cost, which can exceed $50,000 in tuition alone, the teacher must expect to remain in the profession long enough to make the investment worthwhile.[3] But how long is that? And for teachers with different career lengths, how much of their salary bump do they have to fork over to a college or university for an otherwise worthless credential?

I address this question by merging salary schedule information from the NCTQ database with data on the tuition cost of an education MA degree at colleges and universities located near each school district.[4] For each district, I calculate the financial cost and benefit for new teachers considering whether to earn an MA degree part-time over the first four years of their careers.  The cost is simply the tuition spread over four years.[5] The benefit is the MA salary bump, which begins in the teacher’s fifth year and continues as long as he stays in the district.[6]

In the typical district, a teacher has to stay nine years just to break even on the tuition cost of the degree.  In other words, the teacher has to hand over his MA pay increase every year for five years in order to cover the cost of the program.  Teachers with longer careers will eventually come out ahead.  After 20 years in the classroom, a teacher will net about three-quarters of the cumulative pay bump after tuition, a statistic that rises to more than four-fifths after 30 years.[7]

The figure below shows these estimates for the median district as well as districts at the 25th and 75th percentiles.  The extent to which MA degree programs capture the MA pay bump varies significantly across districts.  In one-quarter of districts, it takes no more than three post-MA years to break even and a 20-year teacher gets to keep at least 84 percent of the pay bump.  But in another quarter of districts, it would take at least seven post-MA years to break even and a 20-year veteran would keep no more than 56 percent of the salary increase. 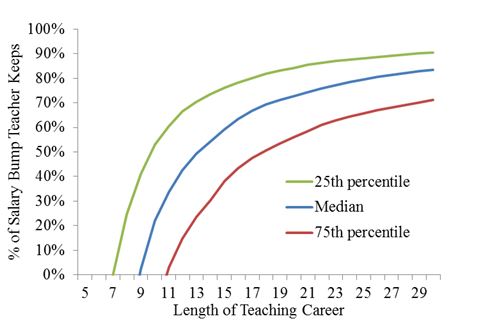 Are these numbers large or small?  For teachers who plan to spend “only” 10 years in the classroom, earning an MA in education is likely a waste of money and effort.  They may want to wait to start working on the degree until they have a few years of teaching experience and a better sense of how long they plan to stay.  But they face a catch-22: the longer they wait to earn the degree, the fewer years they will receive the MA pay bump (assuming a fixed career length).  For teachers who expect to remain in the public schools for longer periods of time, the MA degree represents a potentially sound upfront investment to increase their lifetime earnings.

What does this analysis mean for policy?  Economic theory predicts that workers with postsecondary credentials earn more because the degrees improve their effectiveness on the job or serve as a signal of higher ability.  In education, the MA degree does neither of those things.[8] Eliminating the MA pay bump is the obvious solution, and last year North Carolina became the first state to take that step.  But absent such a move, perhaps states should instead encourage the creation of low-cost MA programs so that more of the pay bump goes into the pockets of teachers, rather than the bottom lines of universities.  Low-cost programs raise concerns about quality in other fields, but in education, it’s hard to imagine a new program being worse than worthless.

[1] In some studies with very large sample sizes, there are statistically significant differences between teachers with and without MA degrees, but the size of the difference is trivially small.

[3] It is also possible that an education MA degree has an economic return in non-teaching jobs, which might be most likely for other positions within the education sector.

[4] I thank Emily Pollard for assistance with data collection.  I calculate the average tuition cost of an education MA degree as follows.  First, I use 2011 IPEDS data to identify all education MA programs within a 25-mile radius of the school district’s central office that granted at least 10 education MA degrees.  For districts that do not have any such programs within a 25-mile radius, I use the closest program.  Second, the tuition cost of each education MA program was gathered from the institutions’ web sites (in order to simplify data collection, tuition data were not gathered for institutions that awarded less than 5 percent of education MA degrees among all programs associated with a given district).  For institutions that list per-credit prices, the total cost is calculated as the per-credit price times the total number of credits required for the MA program.  I use in-state tuition prices for public institutions.  Third, I calculate an average tuition price for all programs associated with each district using the number of MA degrees awarded as weights.

[5] I discount the tuition cost to the beginning of the teacher’s career using a 2 percent discount rate.  I assume that tuition will rise with inflation, so the discount rate is in addition to inflation.  Note that I do not consider other costs, such as fees, books, commuting expenses, and the opportunity cost of getting a degree (what the teacher could have done instead of earning the degree).  I also do not include reductions in the cost due to scholarships or grants, such as tuition reimbursement programs provided by individual school districts.

[6] The NCTQ database reports the MA pay bump for the first and fifth years of teaching as well as for the top of the salary schedule.  I make a linear extrapolation of the pay bump between the fifth year and top of the schedule, assuming that the top of the schedule comes at 20 years of experience.  I assume that the salary schedule increases with inflation, and discount the pay bump to the beginning of the teacher’s career using a 2 percent real annual discount rate.

[7] A rough attempt to account for pension benefits has a modest impact on these estimates.  For a teacher who spends 30 years in the classroom and 20 years in retirement with a pension equal to 50 percent of her final average salary, I estimate that incorporating the pension benefit reduces the tuition cost as a percent of the salary bump from 17 percent to 13 percent.