The U.S. Social Security system, which established old age benefits, is designed to be highly progressive by redistributing income from workers with high average lifetime earnings to workers—and their dependents—who have low lifetime earnings.

Under the basic benefit formula, workers that make less over the course of their lifetime will see a higher percentage of their monthly earnings replaced through Social Security benefits than workers with high lifetime earnings.

The program is one reason America’s senior citizens, when taken as a whole, have fared so well—even throughout the Great Recession. While the average income (adjusted for inflation) of households with a head below the age of 65 fell by 4 percent between 2003 and 2013, the income of those with a head 65 and over rose by 15 percent.

But new research from Barry Bosworth, Gary Burtless, and Kan Zhang finds evidence that some of the program’s progressivity is being offset due to a growing gap in life expectancy between the rich and the poor.

Why Americans are working longer

So why are Americans working longer? One reason is education. Men and women with more education tend to have higher-paying, usually more-rewarding, jobs that provide greater incentives to continue working. In 1985, 42 percent of 60-74 year-olds had less than a high school diploma. In 2013, only 12 percent did.

There are other policy-related reasons, as well. An increase in the age at which workers can claim full benefits from 65 to 66 creates more incentives to delay claiming a pension and possibly to keep working. The shift from private defined-benefit (DB) pension plans to defined-contribution (DC) plans means the longer someone works, the more money they accumulate in their retirement savings accounts, no matter how long they continue working. Then there’s health care: the elimination of many employer-funded retiree health plans makes it riskier for workers to leave their jobs if they aren’t yet eligible for Medicare.

In addition to the fact that more Americans are working longer, there has been a notable shift in the proportion of older Americans continuing to work full time as opposed to part time. Since 1995, the relationship between full and part time work among America’s aged has completely reversed. 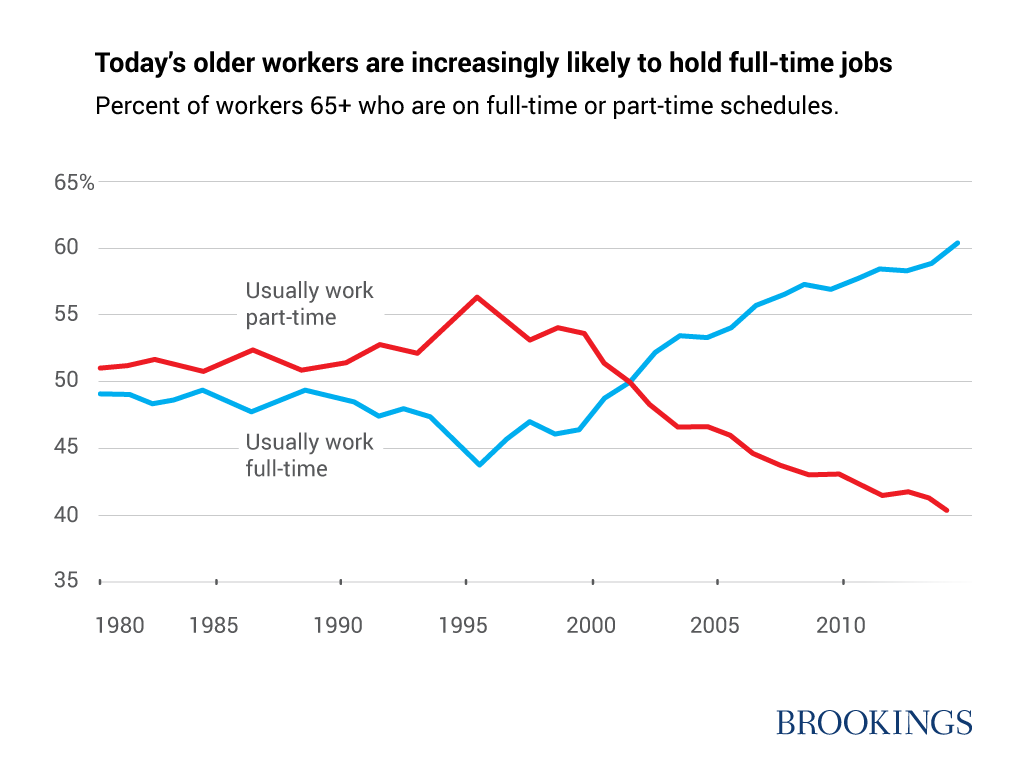 But a closer look at who’s retiring when shows big differences based on income. Fifty-six percent of men and women in the bottom third of the mid-career income distribution—and with a full-retirement age of 66—begin claiming Social Security at or before age 62. Only 13.8 percent delay claiming a pension until they’re 66 years old.

For retirees with a full retirement age of 66, delaying the age of benefit claiming from age 62 to age 70 increases their basic monthly benefit by at least 76 percent. 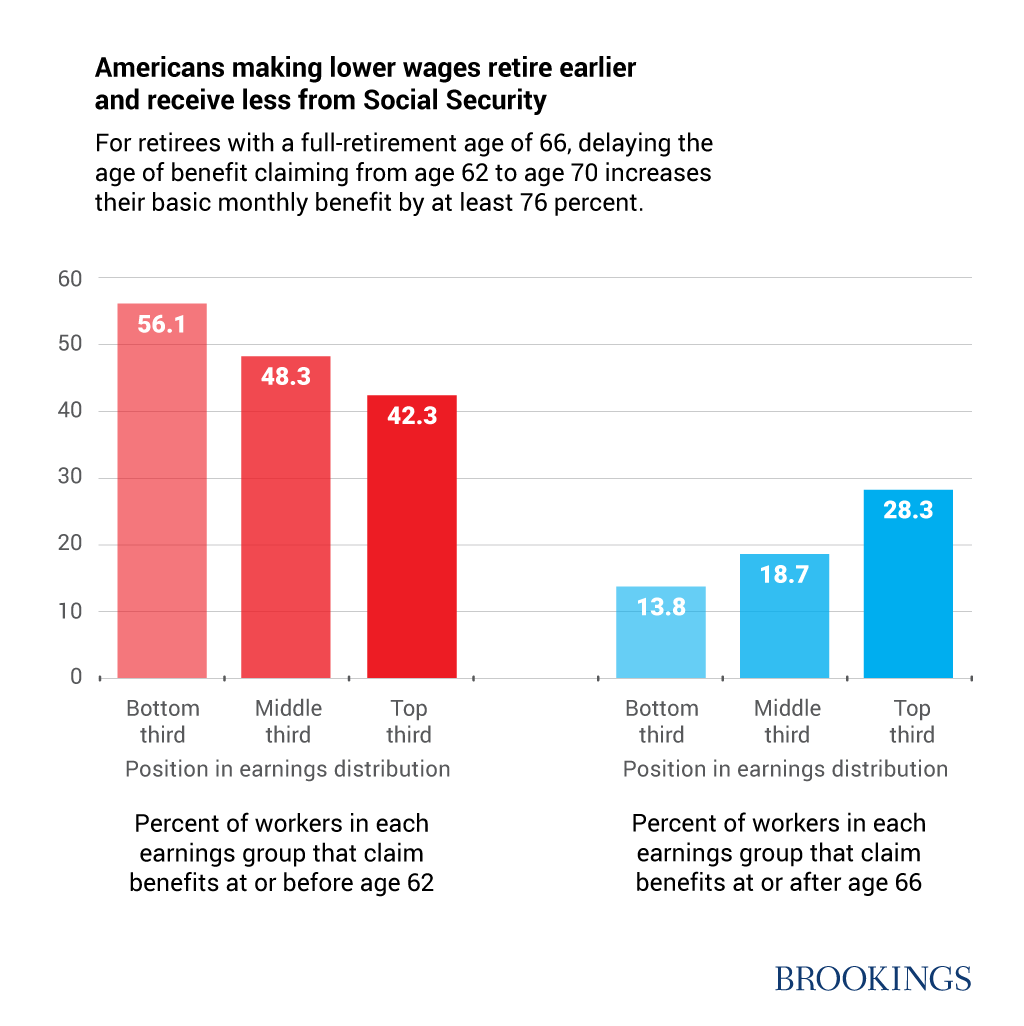 Income inequality has increased noticeably since 1979, and there are many reasons—and theories—as to why.

How come? Social security and other government transfer benefits. When a birth cohort transitions from ages when labor income provides the bulk of family income to ages when Social Security and pensions provide most family income, families at the bottom of the income distribution see some improvement in their spendable incomes compared with the median family in their age group. The reason is that Social Security provides a floor on retirement income for America’s low-income elderly. Delayed retirement, however, has changed things. As more Americans who earn high incomes continue to work longer, the gap between high- and low-income seniors tends to widen, pushing up inequality among America’s seniors, although more slowly than has been the case among working-age adults.

Retiring earlier means workers’ monthly Social Security checks will be less than if they continued working until full retirement age. But there’s another factor at play when we consider how much lifetime income a person receives from Social Security: how long they live. 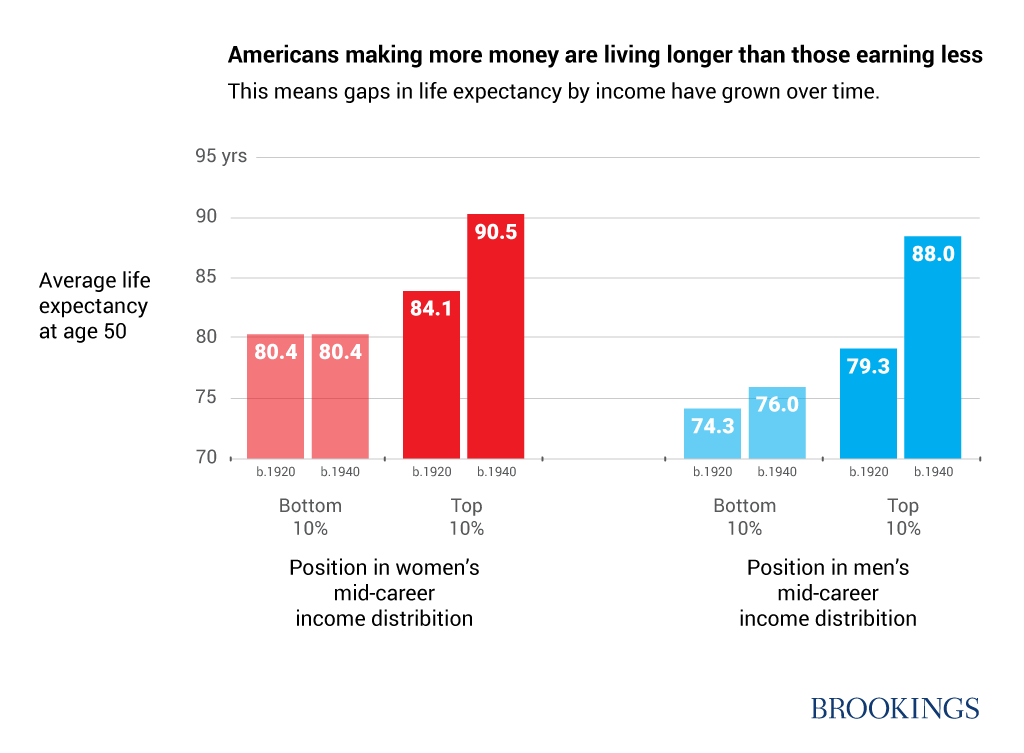 Worse still is that the gap has grown over time. For men born 20 years later in 1940, the difference in average life expectancy is 12 years.

The large and growing gap in life expectancy magnifies to an even greater degree the difference in lifetime Social Security benefits provided to low- and high-earnings workers. Even though the formula that determines monthly Social Security pensions is progressive, a growing share of the progressivity is offset on a lifetime basis by the growing difference between the post-retirement life spans of low- and high-wage workers.

By many economic measures, America’s seniors have fared very well over the past several decades. Today’s seniors are more educated than their peers in previous generations, and many are working longer because they enjoy their jobs and want to stay in the workforce.

When they do retire, America’s elderly—rich and poor alike—have been able to supplement their income with retirement benefits from Social Security and other government transfer programs. As a group, they’ve seen their incomes rise over time while the incomes of younger Americans have fallen. They’ve also experienced less inequality, which has grown at slower rates among America’s elderly than it has for America’s younger workers.

Yet new trends are emerging that could lessen the positive effects of Social Security—and policymakers should pay attention.

While policy changes and other factors have encouraged many Americans to work longer and delay claiming Social Security benefits, the trends toward later retirement and delayed benefit claiming are much weaker among low-wage workers. Earlier retirement means low-income workers receive less money from Social Security each month compared with workers who delay their retirement and benefit application. Furthermore, later retirement by high-wage workers creates more inequality among the aged, as high-wage workers continue to receive big paychecks from their employers while less well paid workers only collect a pension. Finally, the growing gap in life expectancy between low- and high-income workers means that high-wage workers will collect pensions for progressively longer periods, even as low-wage workers see little improvement in life expectancy.

These trends deserve scrutiny as policymakers consider how to reform Social Security in order to keep it adequate for retirees and sustainable for future generations. If benefits are trimmed to protect the program’s solvency, workers experiencing gains in life expectancy would see cuts to their monthly benefits partially offset by the fact they live longer than previous generations and consequently receive pensions for a longer period.

For those workers with the lowest lifetime earnings, a cut in monthly benefits results in a loss in lifetime benefits that is proportionately just as severe as the cut in their monthly pension. They will receive lower monthly payments from Social Security when compared with earlier generations of low-wage workers who retired at the same age. And, unlike high-wage workers, the gains in their life expectancy will not compensate them for the cut in their monthly benefit check.

Download the full paper by Bosworth, Burtless and Zhang, titled “Later Retirement, Inequality in Old Age, and the Growing Gap in Longevity between Rich and Poor” »

How to make retirement income more accessible for all Americans