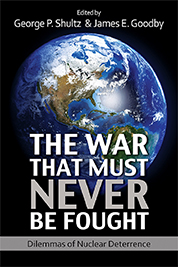 A new book recently published online by the Hoover Institution and edited by George Shultz and James Goodby, entitled The War That Must Never Be Fought: Dilemmas of Nuclear Deterrence, examines arms control and nuclear deterrence from various regional and institutional perspectives. Brookings Senior Fellow Steven Pifer contributed writing to two chapters, which discuss the realist rationale for eliminating nuclear weapons worldwide, and potential mechanisms for achieving that aim.

In chapter three of The War That Must Never Be Fought:  Dilemmas of Nuclear Deterrence, entitled “A Realist’s Rationale for a World without Nuclear Weapons,” Pifer explains why an American realist might see a world without nuclear arms as a desirable objective. He notes the risks posed by continued reliance on nuclear arms and nuclear deterrence and describes how, in a non-nuclear world, favorable geography, a global network of allies, and powerful conventional forces would ensure U.S. and allied security.

In chapter 15, entitled “Creating the Conditions for a World without Nuclear Weapons,” Pifer and Goodby describe how a joint enterprise could be created to move toward a world free of nuclear arms. They evaluate current approaches to arms control, and discuss the essential features, principles, processes, mechanisms and initial actions of a joint enterprise which would allow for further deep reductions.

The above chapters are from the forthcoming book, The War That Must Never Be Fought: Dilemmas of Nuclear Deterrence, edited by George P. Shultz and James E. Goodby (Stanford, CA: Hoover Institution Press, 2015). Copyright © 2015 by the Board of Trustees of the Leland Stanford Junior University. All rights reserved.