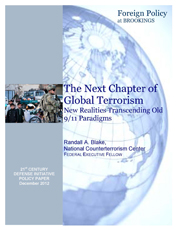 The 9/11 attacks elevated Osama bin Laden and his group to mythical status in the American psyche. The two wars that followed during the next decade and his 4,300 day stay on the FBI’s Most Wanted List only added to bin Laden’s mystique, establishing him as the central figure in the post-9/11 chapter of violent global jihad. However, by the time of his death in May of 2011, paradigms associated with bin Laden and the group he left behind to Ayman al Zawahiri and other global jihadists were already shifting significantly. Collectively, these new realities transcend previous 9/11 paradigms and have led to a new chapter of global jihad.

This paper acknowledges the lasting impact of 9/11 and Osama bin Laden but looks beyond the 9/11 paradigms to examine the state of the next chapter of global jihad, which began to come into focus between 2009 and 2011, and is driving the threat calculations for 2013 and beyond. It examines the efficacy of the far enemy strategy absent its chief advocate, the shifting role of affiliates and allies, South Asia’s pivotal role, the Arab Awakening, and the threat of Do-It-Yourself (DIY) terrorism in the U.S. homeland and the West in general. No examination of the evolving threat would be complete without a discussion of the broad technological and societal trends underway that provide unique opportunities and challenges for global jihadists. The Postscript concludes with a cautionary tale of expecting the unexpected in this next chapter.