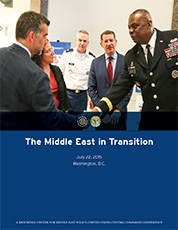 On July 22 to 23, the Center for Middle East Policy at Brookings and the United States Central Command (CENTCOM) jointly convened for two days of discussions that brought together analysts, officers, and policymakers to examine both new and enduring challenges facing the United States in the Middle East. This year’s conference, “The Middle East in Transition,” explored the upheaval in key countries of the region resulting from the Arab uprisings, as well as longstanding conflicts and challenges like terrorism and regional power competition.

The conference featured academic experts, visitors from the Middle East, and senior American policy voices, creating a robust dialogue that spanned topics from settling civil wars to rebalancing military and civilian tools of statecraft. The center was honored that General Lloyd Austin, CENTCOM’s commander, joined to deliver opening remarks and participated in much of the conference. At the special evening event, the Honorable Michèle Flournoy, Ambassador Richard Haass, and Ambassador Martin Indyk joined in a spirited conversation about how the United States could build a sustained and coherent strategy toward a region undergoing such fundamental change.

Together, the speakers and conference participants offered insights that went well beyond conventional Washington wisdom, peered into the future, and provided valuable lessons and ideas for the U.S. military and the broader policy community.

The proceedings from this conference include summaries of the sessions, the full text of General Austin’s keynote address, and an overarching essay by Kenneth M. Pollack.