There is a growing marriage gap along class lines in America. This may be bad news for social mobility, since children raised by married parents typically do better in life on almost every available economic and social measure.

But it is important to try and understand why the children of married parents do better. Is it simply because they have, on average, higher family incomes? (Two earners are better than one, and one household is cheaper to run than two.) Or are two committed spouses better able to provide consistent parenting? Is it marriage itself that matters, or is marriage the visible expression of other factors, that are the true cause of different outcomes? And if so, which ones?

In 1950, almost 90 percent of children age 0 to 14 lived with married parents — now that proportion has fallen to less than two-thirds of children.   The gap in marriage is growing, especially in terms of childbearing. While marriage is struggling against cultural, social and economic headwinds in poorer communities, it is flourishing among affluent, well-educated Americans who are both more likely to marry and more likely to stay married: 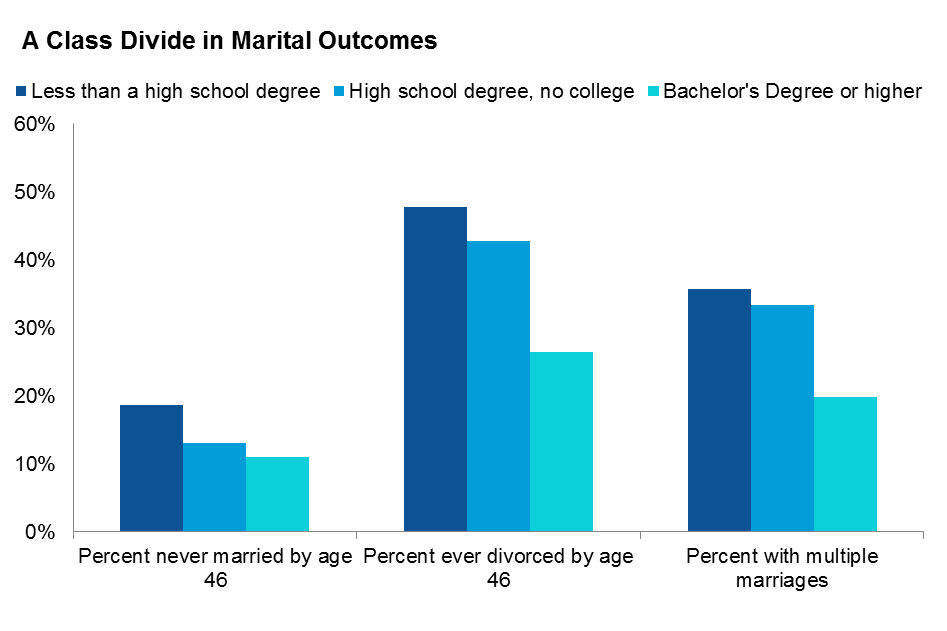 This marriage gap results from a shifting kaleidoscope of social, cultural and economic factors. For a definitive overview of trends, see the forthcoming book Generation Unbound: Drifting into Sex and Parenthood without Marriage by our colleague Isabel Sawhill.

Children raised by married parents do better at school, develop stronger cognitive and non-cognitive skills, are more likely to go to college, earn more, and are more likely to go on to form stable marriages themselves. Using our own benchmarks of success at different life stages, developed as part of the Brookings Social Genome Model (now a partnership with the Urban Institute and Child Trends), we find similar patterns.

Our adolescent success measure, for example, is to graduate high school with a GPA of at least 2.5 and without either becoming a parent or getting a criminal record. Two out of three adolescents with mothers married throughout their childhood clear this hurdle, compared to 42% of those with mothers married for some but not all of their childhood and just 28% of those raised by never-married mothers. 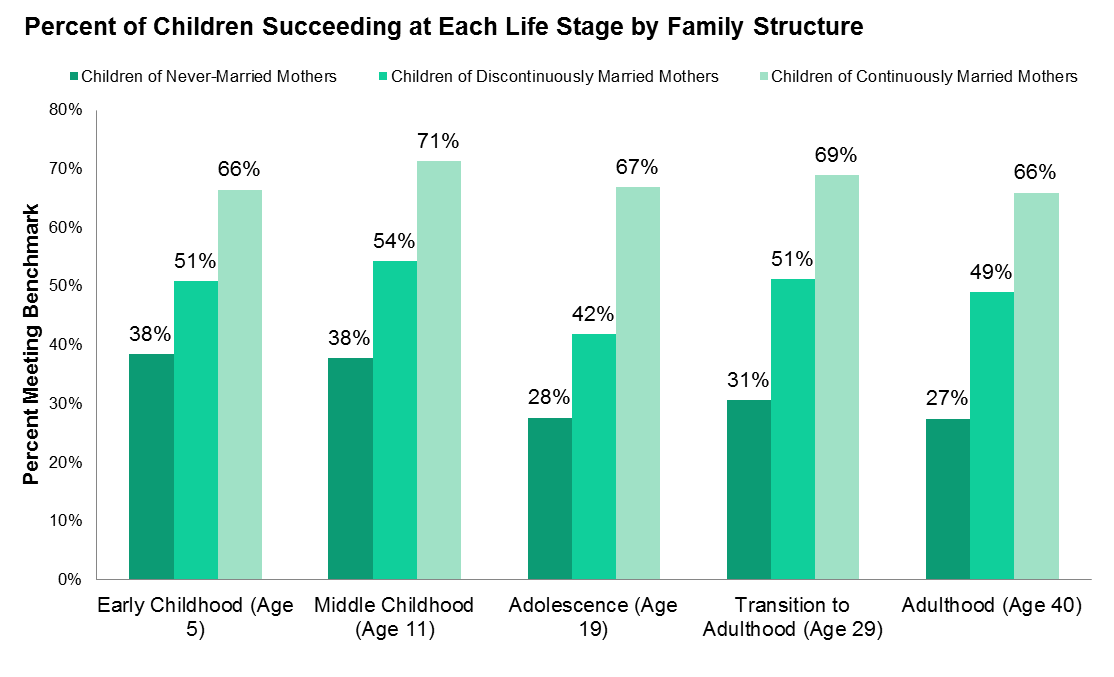 But is it the marriage itself that matters? Parents who get and stay married tend to be different in many other important respects from single parents – including having more time, education, and income –  and it may be these differences that lie behind the gaps in their children’s success, rather than the fact of marriage itself.

The principal benefits of growing up with married parents appear to come from two sources:

Married-parent families tend to have higher incomes than single-parent families. Part of this is simple addition: two people tend to earn more than one. But people who get and stay married also differ on key factors that influence income. These days, for example, marriage is more common among those with a bachelor’s degree or more, who tend to earn more than those with fewer years of schooling.

Comparisons between the outcomes of children of married and unmarried parents are then, at least to some extent, comparisons between the outcomes of children from well-off families and children from poorer families. The apparent “marriage effect” may actually be an income effect, reflecting the benefits of having more money for children’s development, such as better nutrition, better schools, and safer neighborhoods.

Using the Social Genome Model, we estimate the different outcomes of adult income for children raised by continuously married parents and those raised by parents married for some or none of their childhood years. The specific outcome is their position on the income rank, expressed as a percentile, at or close to the age of 40. We find that children who grow up with continuously married mothers rank on average 14 percentiles higher on the income distribution as adults than those who do not. (The percentile ranks are 57 and 43, respectively).

But is this an ‘income effect’ rather than a ‘marriage effect’? To get an idea of the importance of income, we next control our results for family income throughout childhood. The gap shrinks, from 14 percentiles to 9 percentiles.

Once we also account for differences in a raft of other factors – parenting behavior, maternal education, race, and maternal age – the gap shrinks further to around a 4.5 percentile difference.

It looks then as though a non-trivial proportion – around a third – of the gap in outcomes can be explained by the higher incomes of married parents. But it is also clear that the benefits of having married parents are about more than money. Maybe parenting is part of the answer?

One of the main family inputs to a child’s success is the emotional support and cognitive stimulation that they receive from their parents, as we’ve argued in The Parenting Gap.

It is plausible that parents who commit to each other through marriage may also have a stronger joint commitment to raising their children. Indeed, this is one of the reasons people may choose to marry in the first place. Particularly among the well-educated, marriages are increasingly acting as ‘commitment devices’ facilitating what we have elsewhere labeled High Investment Parenting, with parents sharing the responsibilities of teaching and caring for their children.

Teasing out the relationship between marriage and parenting behavior is tricky, however. It is likely that many skills and attributes support both marriage and good parenting: commitment, sensitivity, patience, and so on.  People who marry and stay married are also likely to be highly-committed and highly-skilled parents; in which case, we may be seeing a ‘parenting effect’ rather than a ‘marriage effect’.

In order to get a sense of the parenting effect, we conduct the same exercise as the one for family income, but controlling first simply for a measure of parenting. The parenting measure used is the Home Observation for Measurement of the Environment scale, which includes both interviewer observation and mother self-report on parenting behavior like frequency of reading to the child and showing physical affection. (For more details, see our paper, The Parenting Gap).

We find that parenting behavior also appears to help explain the different outcomes: after controlling for parenting, the gap between children of continuously married mothers and others shrinks from 14 percentiles to 7.5 percentiles.

In other words, children of continuously married parents do not outperform other children just because their parents show better parenting behavior, but it does play a large role in the marriage gap.

The benefits of marriage in terms of children’s outcomes and life chances seem clear. The difficulty is teasing out the key factors. Our analysis suggests that both the higher incomes and the more engaged parenting of married parents count for a good deal. If anything, parenting may matter a little more.

What does this mean for public policy? Marriage itself seems to be largely beyond the reach of public policy, with marriage promotion schemes showing little promise, as Ron Haskins outlined in an essay in National Affairs.

If the benefits of marriage for children can be explained by other observable characteristics of the family, and especially money or parenting behavior, then policy may be more successful if focused on those pathways. It would be convenient to find the magic bullet – the one family input that really matters – but of course the truth is messier. Children’s life chances will be influenced by a complicated, shifting mesh of family characteristics (and many other factors outside the family).

Marriage is a powerful means by which incomes can be raised and parenting can be improved. But marriage itself seems immune to the ministrations of policymakers. In which case, policies to increase the incomes of unmarried parents, especially single parents, and to help parents to improve their parenting skills, should be where policy energy is now expended.

Correction: This blog post was amended on September 8th. The sentence “The two-parent family is no longer the typical US family” was changed to more accurately read “In 1950, almost 90 percent of children aged 0 to 14 lived with married parents — now that proportion has fallen to less than two-thirds of children.”