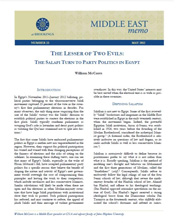 Last winter, Salafi parties in Egypt proved themselves a formidable political force, winning a quarter of the vote in the country’s first elections in the post-Mubarak era. For many in Washington, the unexpected strength of Egypt’s conservative religious groups raised unsettling questions about the future of U.S.-Egyptian relations and America’s security interests in the region.

Will the political success of Salafis turn Egypt into an anti-American power and strengthen jihadist groups like al-Qa’ida that are bent on using violence against the United States and its allies?

In the Saban Center Middle East Memo, William McCants, a Middle East specialist at CNA and adjunct faculty at Johns Hopkins University, examines the implications of the Salafis’ turn to, and success in, electoral politics. McCants argues that while political participation may not moderate Salafis’ positions on social issues, it will likely erode the strength of their most extreme and violent affiliates. For this reason, America’s interests may be best served when Salafis play a role in post-revolution politics.