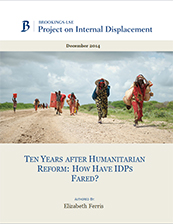 In 2004, the Brookings Project on Internal Displacement and the UN Office for the Coordination of Humanitarian Affairs (OCHA) undertook a study that found major shortcomings in the ways in which the international community was responding to internally displaced persons (IDPs). In light of these findings, Brookings and OCHA developed a number of recommendations aimed at improving IDP protection and assistance. The study, entitled Protect or Neglect: Toward a More Effective UN Approach to the Protection of Internally Displaced Persons, directly contributed to the humanitarian reform initiatives launched by the Emergency Relief Coordinator in 2005.

Much has happened in the ten years since the 2004 study, including political changes in countries with large numbers of IDPs and reform of the international institutional architecture. It thus seemed timely to take a step back and review the extent to which these changes have addressed the shortcomings in IDP protection and assistance identified in the 2004 review. Building on the initial Brookings/OCHA report, the Brookings-LSE Project on Internal Displacement developed a research plan for an independent study around the overarching question: How Are IDPs Faring Ten Years after Humanitarian Reform? The study sought to assess whether institutional reforms of the humanitarian system (such as those carried out through the cluster approach) have improved IDP protection and assistance, as well as the extent to which national authorities are protecting and assisting IDPs within their borders.

The study was based on field research in three countries: Colombia, Democratic Republic of Congo (DRC) and Somalia, all of which were included in the 2004 report. Of the nine countries in the original study, internal displacement (or at least reported internal displacement) had significantly decreased in five: Russia, Liberia, Angola, Sri Lanka and Nepal and their governments considered that internal displacement had ended. (For a brief overview of the displacement situation in these countries, see the Annex to this study.) Although there was considerable discussion about including Burundi as one of the three case studies for field research, it was decided – in consultation with the reference group – to focus on the three countries with the largest number of IDPs: Colombia, DRC and Somalia.

While international response to internal displacement has clearly improved since 2004, it is important to recognize a) that the bar was pretty low in 2004, b) that other factors beyond humanitarian reform were responsible for many of the improvements, and c) that there are many areas where further work is both needed and possible. We hope that this study leads to further discussions and action among humanitarian actors and that when the next 10 year retrospective study is done – in 2024? – the conclusion will be not be ‘yes, the system is better but too many IDPs are still unprotected and living in protracted situations…’ but rather ‘yes, there are fewer IDPs, there is a better response to those who are displaced and most of those who were displaced in 2014 have found solutions.’