The United States has experienced a remarkable 52 percent decline in teen childbearing since 1991. Understanding the causes of this decline are important for developing subsequent policies to continue this trend. This decline can be distinguished by two periods. Teen births fell at a rate of 2.5 percent per year between 1991 and 2008; that rate tripled to 7.5 percent per year between 2008 and 2012. We investigate these two periods separately.

In the earlier period, based on a review of previous research in combination with our own statistical analysis, we find that expanded access to family planning services and reduced welfare benefits are the only two state-specific public policies that can plausibly explain any of the decline, albeit not that much of it. We also show that the decline in the United States is comparable to that experienced in other developed countries, further indicating that American public policy was not a major factor behind the decline. 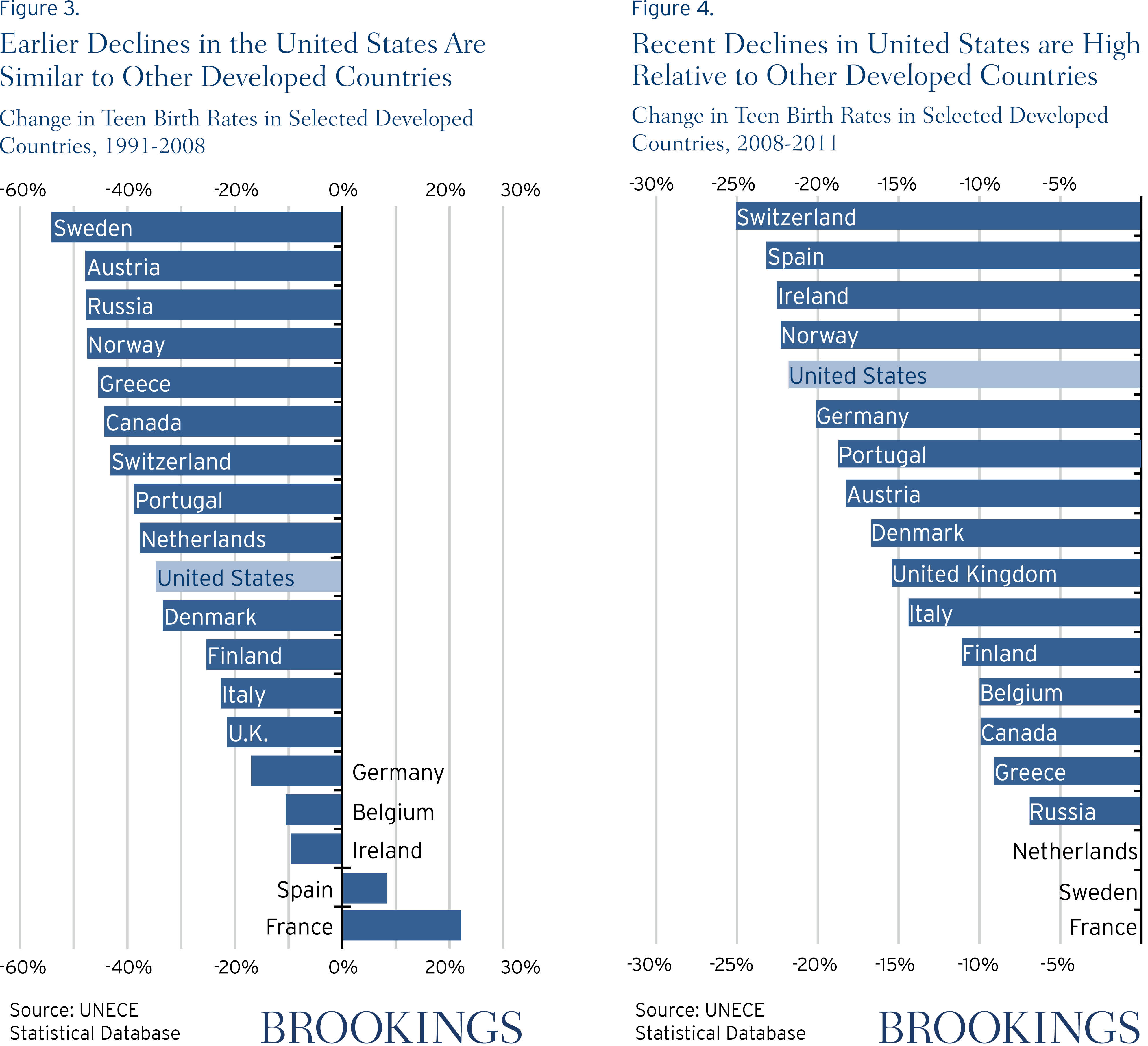 It seems that broader trends that transcend national borders have been the primary driving factors. We speculate that improved contraceptive technology and expanded access to it, along with expanded educational opportunities for young women are two global trends that have played a key role in slowly driving down rates of teen childbearing across developed countries. We attribute the decline in the more recent period in the U.S. to a continuation of those broadly experienced ongoing trends plus an acceleration due largely to the effects of the high unemployment rate and to the impact of media influences, particularly MTV’s reality TV show, 16 and Pregnant.

Read Media Influences on Social Outcomes: The Impact of MTV’s 16 and Pregnant on Teen Childbearing, by Melissa Kearney and Philip Levine

To think about what policies would be effective going forward, we make an important distinction between addressing teen births among teens who actively seek to avoid them and those young women who are largely ambivalent about becoming teen mothers. Rates of birth among the first group will decline with innovations that continue to expand the use of highly efficacious forms of contraception. Reducing teen births rates among the second group will require convincing them that they have reason to avoid becoming teen mothers. We argue that limited opportunities for disadvantaged young women to move up the economic ladder play an important role in the high rates of teen childbearing in the U.S. If we are to increase the rate of decline in teen births, we need to provide young women with the ability to succeed in other dimensions of their life so that they want to avoid giving birth at a young age. In our view, human capital investments in early childhood education, college access, and other such interventions are every bit as important as more targeted, teen pregnancy reduction efforts.