Note: This paper is part of the

for the UN High Commissioner for Refugees Division of International Protection. 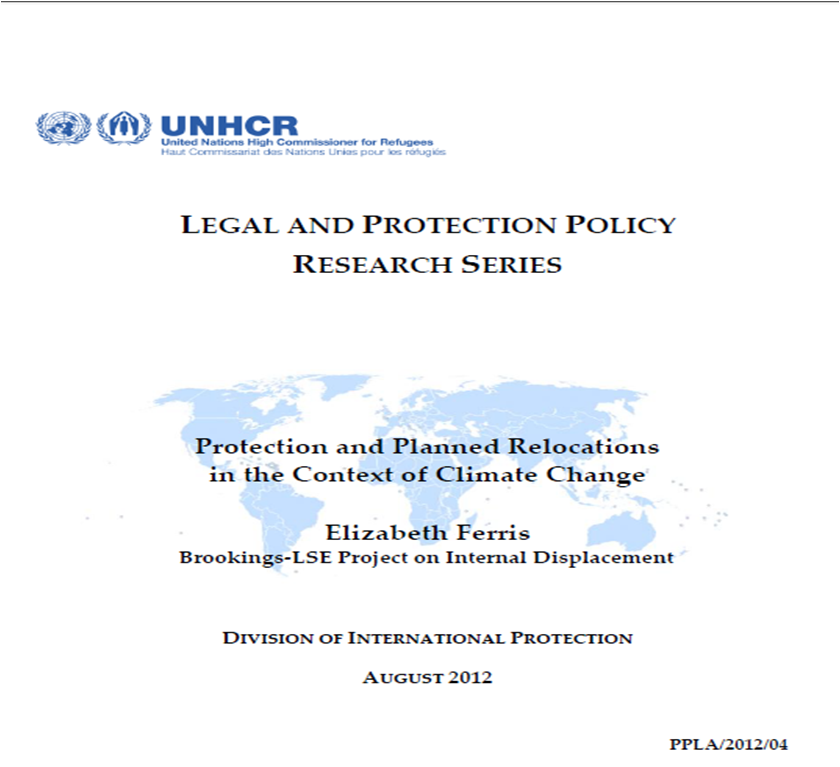 There are several different subcategories of people who may need to be relocated as a result of the effects of climate change, including:

Development actors, particularly the multilateral development banks, have many years of experience in relocating and resettling communities in order to implement development projects. This paper explores whether this experience may be relevant in considering relocations in the context of climate change. The term ‘development-forced displacement and resettlement’ (DFDR) refers to the involuntary displacement and resettlement of people and communities by large-scale infrastructure and other projects. The term relocation generally refers to the physical process of moving people and can be either temporary or permanent and either voluntary or forced. In contrast, the concept of resettlement as used by those working on development-displacement refers to a process to assist displaced persons to replace their housing, assets, livelihoods, land, access to resources and services and to enhance, or at least restore, their living standards. They are used in this way in this paper, while noting that the terms resettlement and relocation are often used interchangeably in the development-displacement literature.

The scale of development-induced displacement is enormous with millions of people displaced every year. The multilateral development banks have played the leading role in developing safeguards to prevent or minimize the impoverishment of communities resettled in projects which they finance. The underlying principles on which existing guidelines for DFDR are based can be summed up as follows:

In identifying the lessons learned from DFDR for planned relocations made necessary by the effects of climate change, this paper highlights the need to build on these principles by ensuring adequate financing for resettlement/relocation, advance planning, addressing the key role of land, considering the human rights of affected communities and learning from both the positive and negative experiences of DFDR.

One of the main difficulties in devising appropriate guidance for relocations in the context of climate change is the need for a clear internationally-accepted definition as to when an area is determined to be a) uninhabitable (or at risk of becoming such that relocation is necessary), and b) when the cause of the uninhabitability is the result of the effects of climate change. Both of these aspects are difficult to determine. Uninhabitability may be a dynamic continuum rather than a definitive end-state. And it is likely that the causes of uninhabitability are the result of multiple factors, making it difficult to determine the particular responsibility of climate change. Despite these difficulties, this paper focuses on the rights of those facing the prospects of losing their land and livelihoods because of environmental changes. This paper also focuses on internal relocation and does not deal with international relocation.

The paper concludes by noting the necessity and the challenge of bringing together humanitarian, development and human rights actors along with climate change experts to develop general principles to ensure respect for the rights of those who are relocated and resettled because of climate change.

Fixing the climate: Strategies for an uncertain world