Brookings Metro hosted an event on April 26 exploring the report's findings, with speakers discussing how to build a more equitable model of capitalism. Watch the event recording: https://brook.gs/3xHtsSR.

Over the past two years, the COVID-19 pandemic has presented the country’s leading companies with a historic opportunity to reverse the decades-long trends of widening inequality and shareholder primacy, making change for workers seem possible. The pandemic shifted public sentiment about what workers deserve. Corporate leaders made pledges to adopt “stakeholder capitalism” and enhance racial and economic equity. A historically tight labor market pressured companies to increase compensation and enhance benefits. And record profits filled company coffers with ample resources to raise pay.

Did companies meet the moment of this pandemic test? This new report examines the pay practices and financial outcomes at some of the nation’s best-known companies in sectors spanning retail, delivery, fast food, hotels, and entertainment. Together, the 22 companies employ more than 7 million frontline workers—more than half of whom are nonwhite.

This analysis asks: Did these 22 companies pay workers fairly? Did they move to a more inclusive model, in which their frontline workers—not just shareholders and executives—share meaningfully in financial gains? Were financial losses borne equitably?

This report finds that nearly all of the companies fell short of their commitments to move to a more inclusive model. Overwhelmingly, financial gains benefitted wealthy shareholders and executives, while frontline workers experienced the greatest losses and benefited minimally from company success. Despite the hope and hype, the companies are paying workers only modestly more in real terms than they did before the pandemic—and, for most workers, still not enough to get by.

Most of the companies in our analysis raised wages in the first 22 months of the pandemic, at least nominally. Yet due to a combination of high inflation and a very low starting point, the vast majority of their workers still earn too little to get by.

We estimate that across all 22 companies, the average real wage gain, factoring in inflation, was between 2% and 5% through October 2021. Unless these companies raised wages substantially since then, fast-rising inflation would have eroded most, or even all, of the 2% to 5% average wage gains. And at most, only seven of the 22 companies are paying at least half of their workers a living wage—enough to cover just their basic expenses. Only one company, Costco, has a minimum wage today that is close to a living wage. 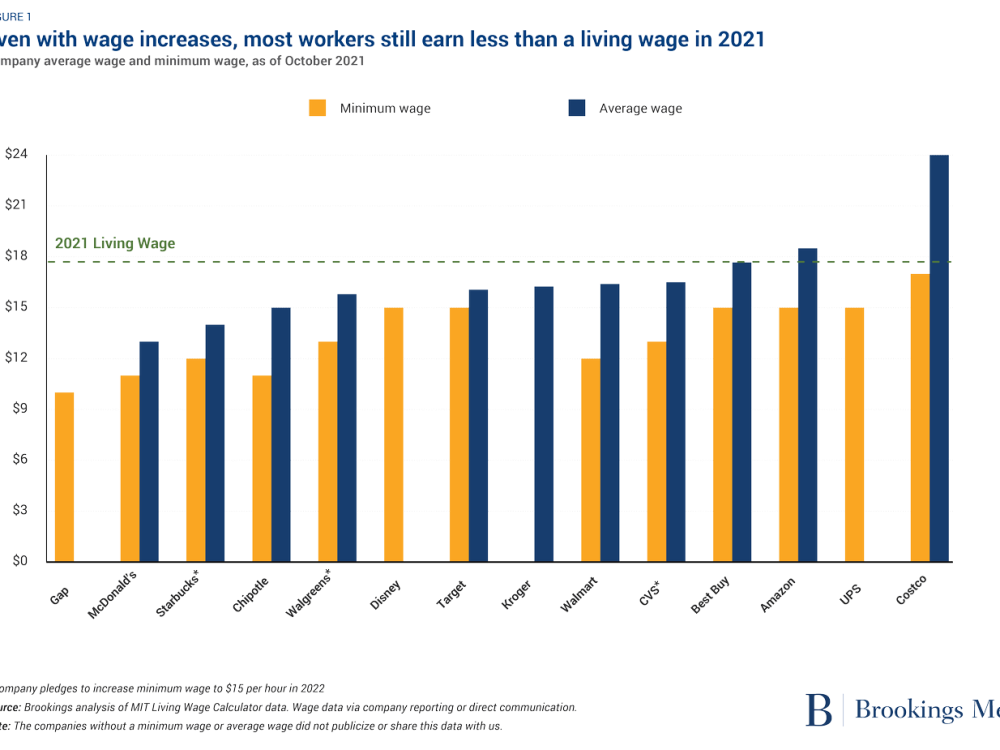 Read more about worker pay on page 15 of the full report. >>

Company shareholders grew $1.5 trillion richer, while workers got less than 2% of that benefit

Far from curbing inequality, the modest gains to workers were dwarfed by the gains to already wealthy shareholders, including executives and billionaires. The 22 companies’ shareholders grew $1.5 trillion richer, while their 7 million workers (more than half of whom are nonwhite) received $27 billion in additional pay—less than 2% of shareholders’ gains. At seven of these companies, the wealth of 13 billionaire founders and heirs alone would have grown by nearly $160 billion since the start of the pandemic—more than 12 times all extra pay to the 3.4 million U.S. workers those companies employed. 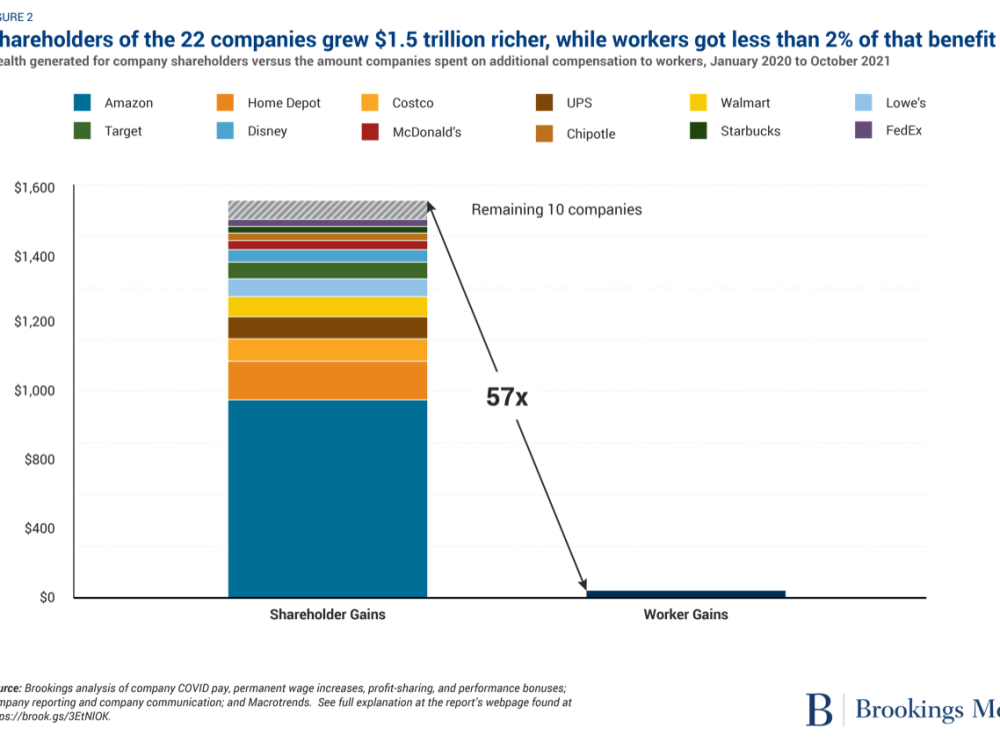 Read more about how financial gains were distributed on page 26 of the full report. >>

More than 70% of the wealth generated for U.S. shareholders by the 22 companies during the pandemic benefitted the richest 5% of Americans, compared to just 1% for the bottom half of all American families, including most frontline workers.

Assuming an equal distribution of wealth and pay gains over the first 22 months of the pandemic, the companies’ financial gains would have raised the wealth of 6 million of the richest households by $140,000 per family. Meanwhile, the 22 companies raised pay for 7 million workers by less than $3,700 per worker, or just under $1 per hour for a full-time employee working 40 hours per week. 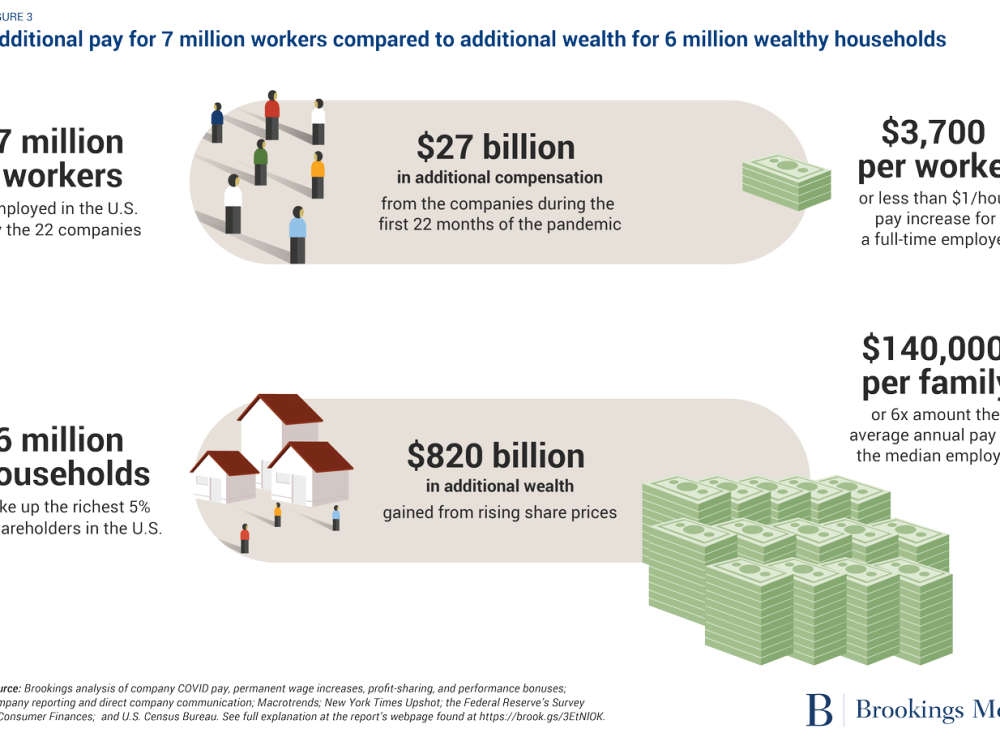 Read more about how financial gains were distributed on page 26 of the full report. >>

The 22 companies spent five times more on dividends and stock buybacks than on all additional pay for workers. Diverting some, or all, of that shareholder cash would have allowed companies to increase wages significantly. The 16 companies that repurchased nearly $50 billion of their shares could have raised the annual pay of their median worker by an average of 40% if they had redirected that money to employees. 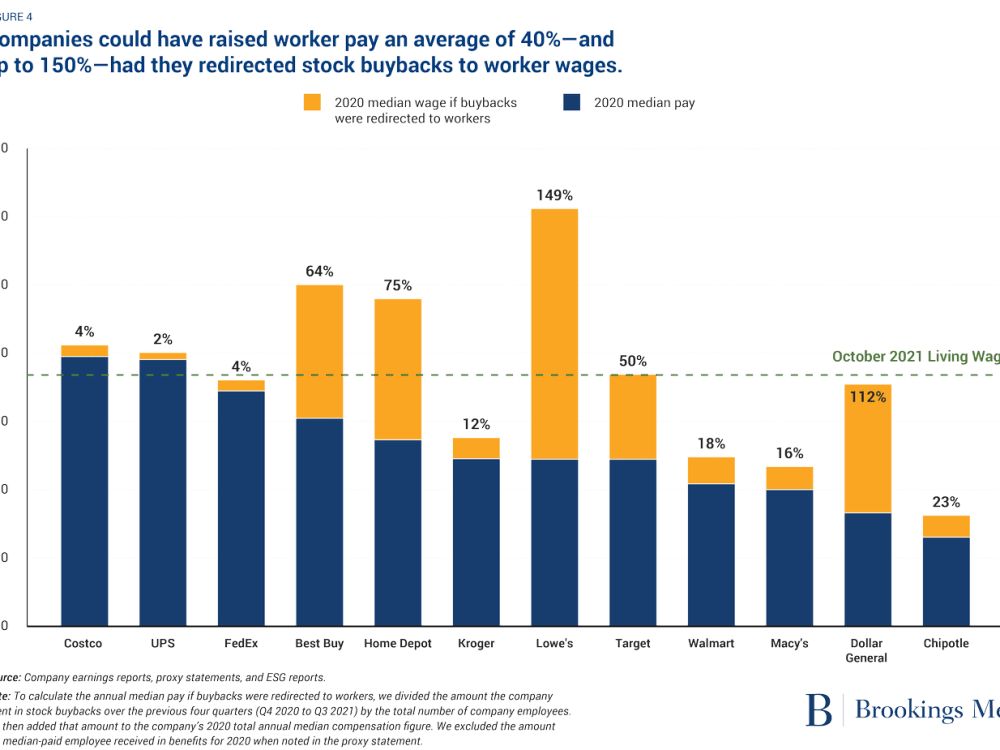 Read more about company choices on page 41 of the full report. >>

Workers experienced the brunt of companies’ losses, while executives and shareholders generally avoided them

At the companies that the pandemic hit hardest, more than 380,000 workers were furloughed and more than 40,000 were laid off. Low-wage workers experienced the brunt of this displacement and economic hardship. But nearly half of these hard-hit companies changed their compensation rules in ways that protected more than $40 million in CEO compensation, even as the companies underperformed and workers lost income.

Read more about how financial losses were distributed on page 34 of the full report. >>

Policy recommendations for a more inclusive model of capitalism

Despite commitments by a majority of the 22 companies to voluntarily embrace more inclusive, worker-friendly “stakeholder capitalism,” the pandemic test revealed that the system changed little. It still overwhelmingly benefits shareholders, executives, and billionaire heirs and founders. Meaningful change is unlikely to come from corporations themselves, whose executives are deeply incentivized to preserve the current system.

Essential but undervalued: Millions of health care workers aren’t getting the pay or respect they deserve in the COVID-19 pandemic

Molly Kinder
Friday, April 10, 2020
Instead, building a more equitable model of capitalism will require a new balance of power between executives, shareholders, and other stakeholders, such as workers, government, and society at large.  Rather than hoping companies will exercise their discretion to benefit workers, the U.S. needs laws, institutions, and policies that require, pressure, and incentivize them to do so.

Policy reforms are needed that span labor law, regulation of working conditions (including wages), corporate disclosure, corporate governance, and more. Specific recommendations include: better employer data for consumers, policymakers, and workers; labor law reform for workers to exercise their power; a raise in the minimum wage; and greater worker voice in corporate governance.

The financialization of recession response

Chinese protesters are reacting to a broken social contract