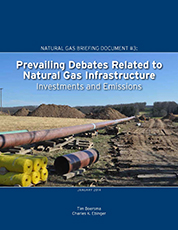 Less than one decade ago, it was conventional wisdom that the United States was becoming the largest importer of natural gas in the world. Hundreds of millions of dollars were invested to prepare the country for imports of liquefied natural gas (LNG). Today, because of the large-scale extraction of natural gas from shale rock layers, policy debates in the U.S.—like the industry—have taken a U-turn. Discussions no longer focus on security of supply for the United States, but rather on the question how long domestic prices will remain low and attract energy-intensive industries and jobs, and the lucrative promise of exports of natural gas to Asian and European markets.

In this natural gas briefing document, the third in a series of briefings by the Energy Security Initiative at Brookings (ESI) on developments in the natural gas market, the authors discuss the debates that are linked to natural gas infrastructure. They do so by describing the status quo, the concerns that have come with it and the recent policy initiatives that have been proposed.