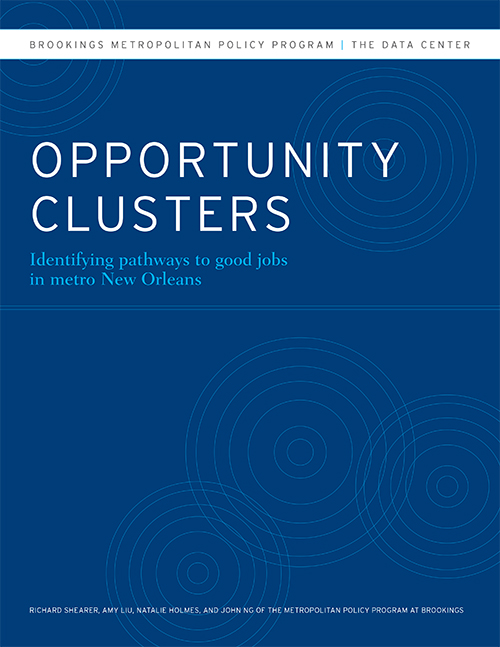 Ten years after Hurricane Katrina, the conversation in metro New Orleans is less about post-disaster recovery and more about the challenge that many communities face today: the need to shape an economy that works for people. Leaders here are working to grow good jobs, help the long-term unemployed, and reduce racial disparities in employment and incomes.

This special report aims to help local leaders find ways to expand economic opportunity as metro New Orleans enters its tricentennial and second decade post-Katrina. Specifically, this new analysis provides information on which parts of the local economy provide “good jobs”—jobs in industry clusters that have the potential to help workers without a four-year college degree earn enough to support themselves and their families and eventually move into the middle class. The report focuses on the period from 2010 through 2014, setting a new baseline from which local leaders can plan and benchmark the region’s future.

This report finds that:

1. The share of metro New Orleans residents living in families struggling to make ends meet had swelled to 41 percent by 2013 despite a growing economy. By 2013, there were 495,300 people in metro New Orleans earning below the living wage, of which 55 percent were working-age adults. As the number of adults and children living in struggling families has grown, so has the number of low-paying jobs in the metro area. Seven out of 10 jobs the metro area added between 2010 and 2014 were in industries that paid below the average local wage.

2. There were 184,000 good jobs in metro New Orleans in 2014, but these jobs are slow-growing and there may not be enough of them. Good jobs—jobs that are accessible to low- and middle-skilled workers and offer stable incomes and upward mobility—represented 33 percent of all the metro area’s jobs in 2014. These good jobs were found in high numbers and concentrations across a range of occupational fields, from production to maintenance and from management to health care. Yet good jobs in the metro New Orleans area grew by 2.2 percent from 2010 to 2014, while other jobs expanded by 6.1 percent.

3. Nearly half of metro New Orleans’ good jobs were in traded industry clusters, yet many of these clusters are losing their competitiveness. About 42 percent of the metro area’s good jobs and nearly half of private-sector good jobs are in clusters that drive the metro area’s economy. These clusters include manufacturing, transportation and distribution, and energy and petrochemicals. A few local-serving clusters also provide many good jobs that are accessible to lesser-skilled job seekers.

5. To build shared prosperity, leaders in metro New Orleans can better align existing economic development, workforce, and education efforts to grow good jobs and connect low- and middle-skilled workers to them. Leaders can shore up the growth and competitiveness of the region’s traded opportunity clusters, enable employers to play a more proactive role in economic and workforce strategies, and better target existing career pathways strategies to the working poor, workers of color, and working-age women, many of whom are single parents.

While cities throughout the nation are grappling with similar issues of uneven economic growth, the leaders and citizens of metro New Orleans have an opportunity to apply the implications of these findings to deepen the suite of innovative reforms already underway and help the region emerge as a model of economic and social progress.