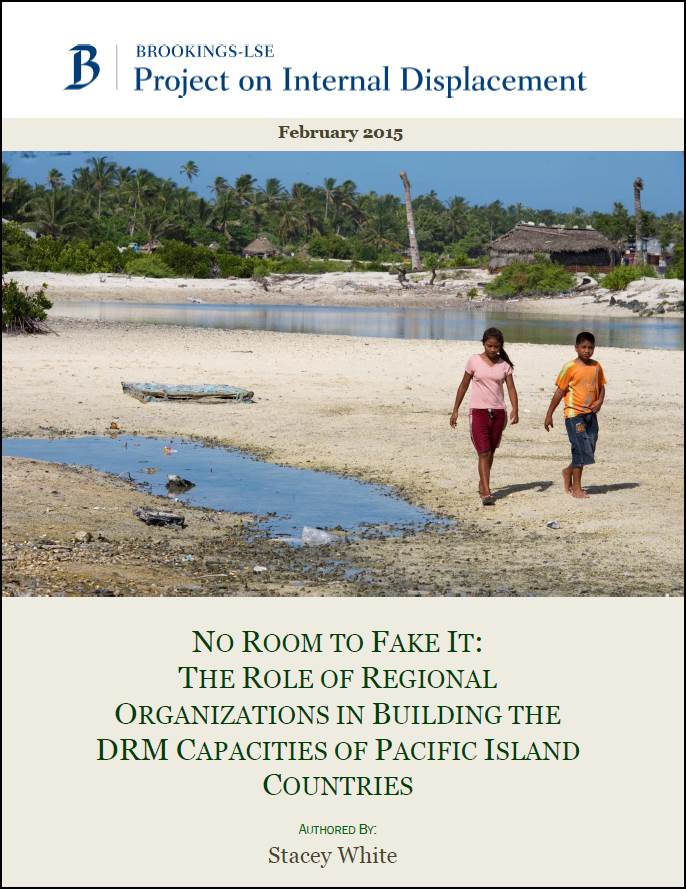 One of the first things to note about DRM action in the Pacific is how symbiotic the relationship is between regional organizations and Pacific Islands Countries (PICs). In some instances, regional and/or multilateral organizations spearhead initiatives that lead to Pacific-wide strategies on disaster-related issues; in other instances, it is a single nation that may develop a country-specific way of working that is then adopted by other countries and supported more broadly by regional partners. The community of practitioners in the Pacific is relatively small, and informal networks of people across governments and institutions are a major driver of the regional DRM agenda. In fact, so interdependent is the relationship between actors in the Pacific that one observer noted, “Sometimes it is hard to know where regional action ends and national activity begins.”

The second thing to remark is how relatively non-politicized DRM is in the Pacific. Compared to other parts of the world, the relationship between regional organizations and states around issues of DRM seem nearly devoid of negative politics. PICs are acutely vulnerable to the adverse effects of natural disasters and climate change and have very few resources to combat physical hazards and to build sustainable resilience on their own. Therefore, they would seem to accept and genuinely embrace the DRM support of regional organizations and networks, allowing these institutions to act as “de facto” gatekeepers in dealing with the rest of the world.

Without the assistance of regional organizations, it would be impossible for PICs to go it alone.

Still, the challenges of DRM in the Pacific are growing all of the time, and the situation remains far from perfect. While there has been a plethora of regional strategies and initiatives to assist PICs over the span of more than three decades, it is far from clear whether these activities have resulted in the existence of real disaster capabilities on the ground. Critics point out that the project-style approach to DRM has resulted in an overall lack of coordination and widespread inefficiencies in building lasting best practice. Still others point out that national DRM progress may have slowed – or even reversed – in recent years with little to no DRM investment being made by national governments and by exceedingly limited absorption capacities at national levels. Pacific Island countries are largely viewed to be underperforming against DRM benchmarks, such as the Hyogo Framework for Action, making it unclear to what extent regional support in this area has had a measurable impact.

On the one hand, international stakeholders are encouraged by the development of integrated DRM and climate change polices and institutional structures by PICs, raising the political profile of DRM both within and across governments in the Pacific. Furthermore, the handling of recent disasters by PICs, such as Cyclone Evan in Fiji and Samoa in 2012, has demonstrated an improvement in national coordination systems and leadership capabilities. On the other hand, observers are frustrated with the slowness of sustainable progress on DRM and with the disjointed nature of different short-term, project-based efforts. There is apprehension that much of the DRM activity is little more than “window dressing,” a worry that is well-justified in a region where the very survival of countries is contingent on their ability to prepare for, respond to, and mitigate disaster and climate change risks. In short, there is simply no room to fake it in the Pacific.