Congress is expected to act later this week to pass a bill into law that pegs student loan interest rates to the rates on treasury bonds, which are set by the market.  This legislation fixes a fundamental flaw in the current student loan program, which has caused policy makers to waste time in recent years haggling over student interest rates.  The fix is a good one, but as I discussed here it won’t make a big difference in the lives of most borrowers.  Regardless, now that it’s behind us we can begin to think about bigger issues in student lending.

A pervasive theme in the narrative surrounding student loans is that a crisis is on the horizon.  The media has done a good job of showcasing instances of student lending gone wrong (see here, here and here).  This has convinced many that the entire system of student lending is destined for collapse.  Unfortunately we have insufficient evidence to either support or refute this notion.  The New York Federal Reserve Bank has provided some research on the financial health of the student loan market, but their efforts are limited by data constraints.  Without administrative records linking education debt with earnings history it is difficult to fully comprehend what is happening in the financial lives of borrowers.  While a complete understanding of the market is not currently within reach, I can provide some evidence that should help to frame this discussion.

The issue of exorbitant debt burdens is often raised in the discussion of a crisis in student lending.  The media’s focus on high debt graduates has caused many people to believe that cases of extreme borrowing are more common than they really are.  In fact, the vast majority of borrowers have modest debts.  The figure below shows that 77 percent of households have less than $25,000 of outstanding education debt.  Only a small number of households, 1 percent, have debt burdens greater than $100,000.  Note that these debt figures refer to household level debt, meaning that the per-person debt is even lower.  Over-borrowing can be catastrophic for individuals, but the fact that it happens rarely means that it is unlikely to generate a systemic crisis.  Rather than overhauling the student lending system to address this problem, we should put in place consumer protections to limit students from borrowing more than they can reasonably expect to repay. 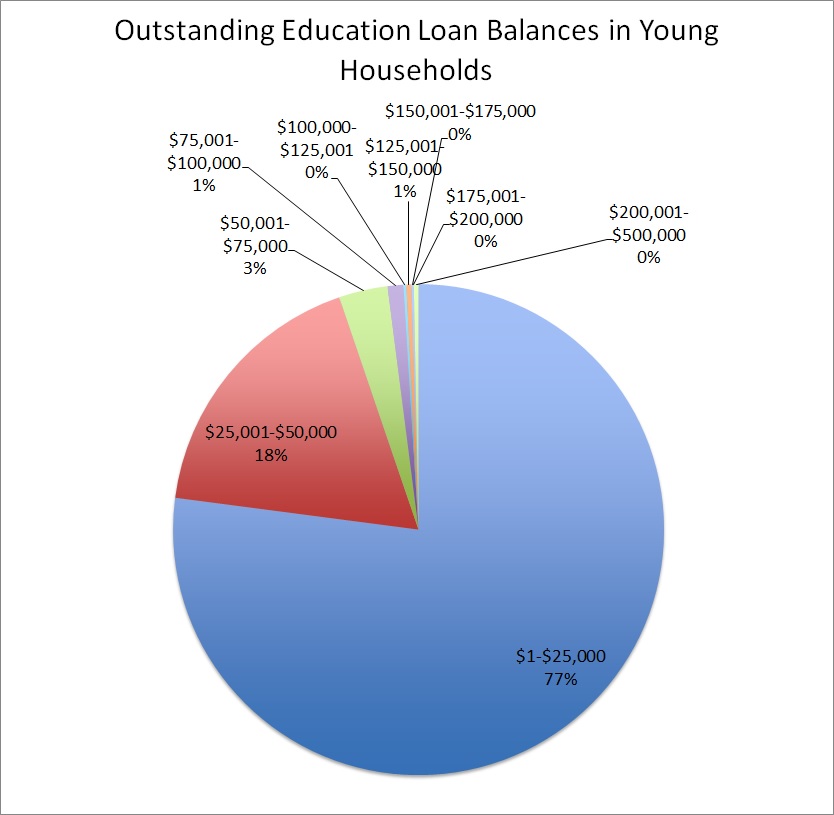 The discussion around student lending often suggests that additional debt means greater financial hardship for the borrower.  We often read stories about graduates who are unable to afford their loan payments and return home to live with their parents.  However, this narrative may be encouraging false economy when it comes to investing in higher education.  In the figure below I plot a measure of financial hardship (frequency of households having any debt payment over 60 days past due in the past year) against outstanding education debt.  If additional education debt were to cause an increase in financial hardship we would see an increasing trend.  This isn’t the case.  In fact, borrowers with less than $10,000 in outstanding education debt have among the highest levels of financial hardship according to this measure.  These figures do not imply that borrowing more will not result in increased hardship for a given borrower, but rather that among the pool of borrowers currently in repayment, those with greater debt burdens are not experiencing greater hardship. 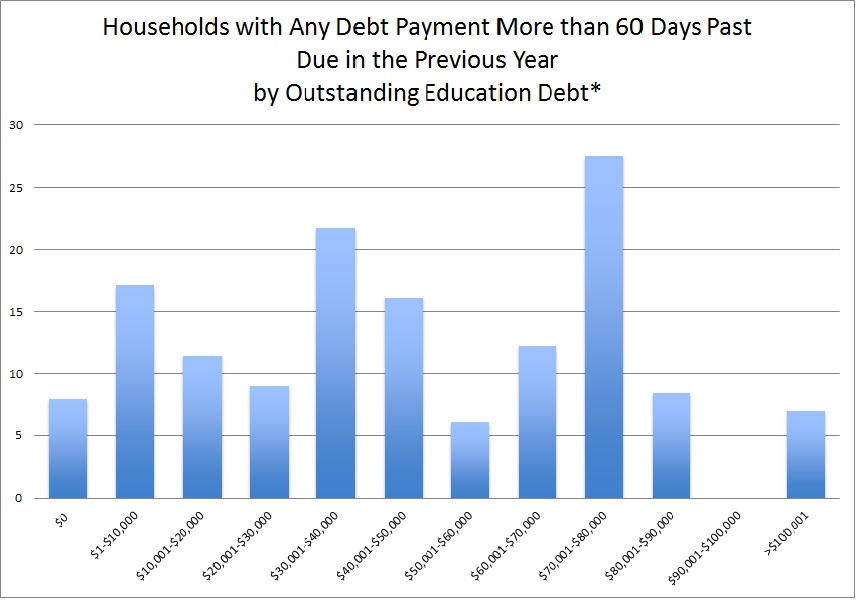 The lack of financial hardship seen among high debt borrowers reflects the fact that high debt individuals, or households, realize high earnings.  This is consistent with the findings that dollars spent on higher education yield, on average, a large positive return.  In the figure below, I plot the ratio of monthly debt payments to monthly income against outstanding education debt.  Mimicking the previous point, debt to income ratio does not grow as outstanding debt increases.  This means that income increases sufficiently to compensate for the increase in debt.  (An alternative explanation for this observation is that borrowers with large outstanding education debts delay purchasing their first home.) 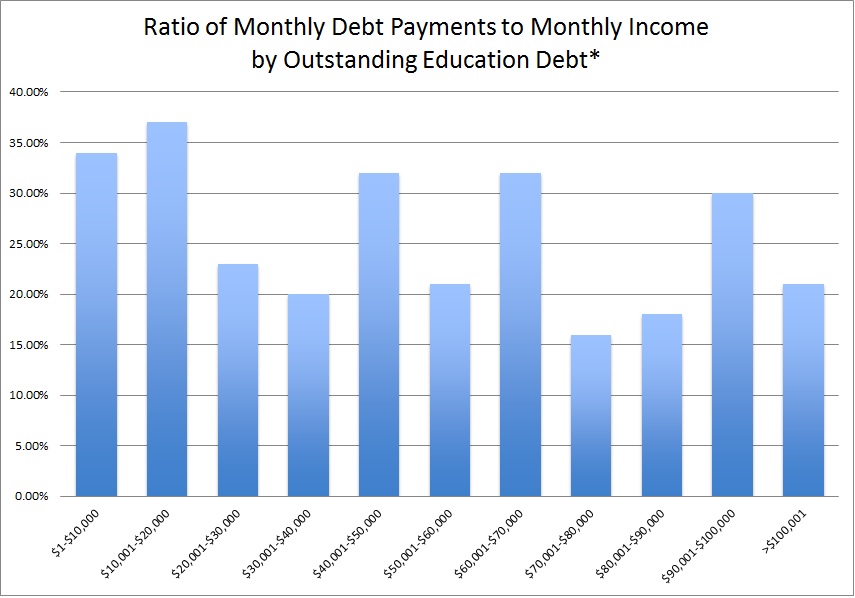 While we still can’t say whether the student loan market is on course for a crisis (although I suspect that it is not), we can make a few conclusions that will support the discussion.  First, the cases of exorbitant debt burdens often cited by the media represent the experiences of a very small minority of borrowers.  We need to be thoughtful about putting in place consumer protections to ensure that future students do not find themselves in that position, but realize that solving this problem will not be the silver bullet that fixes the system of higher education finance.  Second, we need to rethink the proposition that more student loan debt leads to greater financial hardship.  The answer to the systemic problems in student lending is not to discourage borrowing.  Rather, we should focus on propagating the idea that loans are a valuable tool for raising future earnings when they are used appropriately.