Editor’s note: This paper is currently only available in Spanish. The English translation is forthcoming. 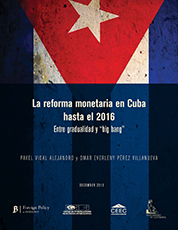 In La Reforma Monetaria en Cuba Hasta el 2016: Entre Gradualidad y “Big Bang” (Monetary Reform in Cuba Until 2016: Between Gradualism and the “Big Bang”), Pavel Vidal Alejandro and Omar Everleny Pérez Villanueva analyze the benefits and costs of the eventual devaluation of the official exchange rate for the Cuban peso, the main measure the Cuban government will employ to achieve the goal of monetary unification in 2016. Possible policy responses and alternatives regarding devaluation of the exchange rate are evaluated. The authors conclude that, as far as is possible, the best strategy for the Cuban currency reform is a gradual devaluation and not the application of a “big bang” approach. However, given the huge gap between the multiple exchange rates, sharp depreciation in the value of the Cuban peso will be required at times.

This paper was prepared for a series of expert workshops on Cuban economic change in comparative perspective organized by the Foreign Policy Latin America Initiative at the Brookings Institution and the University of Havana’s Center for the Study of the Cuban Economy and the Center for the Study of the International Economy. It was presented at an experts’ seminar in Havana, Cuba on September 26, 2013 and was subsequently revised. The papers being prepared for this series will be collected in an edited volume and published by Brookings in 2014.

Should Venezuela seek international assistance? Ways out of the economic and humanitarian crisis

To be countercyclical or not? That is the question for Latin America