For decades, the U.S. private pension system has provided preferential tax treatment to employer-provided pensions, 401(k) plans, and individual retirement accounts relative to other forms of saving. The effectiveness of this system of subsidies is controversial. Despite the accumulation of vast amounts of wealth in pension accounts, concerns persist about the ability of the pension system to raise private and national saving, and in particular to improve saving outcomes among those households most in danger of inadequately preparing for retirement.

The saver’s credit, enacted in 2001 as part of the Bush administration’s tax cut legislation, provides a government matching contribution for voluntary individual contributions to 401(k) plans, individual retirement accounts (IRAs), and similar retirement savings arrangements. It is the first and only major federal legislation directly targeted to promoting tax-qualified retirement saving for moderate- and lower-income workers. Yet its current status as both temporary—it is scheduled to expire in 2006—and nonrefundable hinders its ability to be a real help to low- and middle-income families. This policy brief outlines several ways to improve the credit.

Many of the major concerns about the nation’s pension system stem, at least in part, from the traditional form of the tax subsidy to pensions. Pension contributions and earnings on those contributions are treated more favorably for tax purposes than other compensation. But pension tax preferences are worth the least to lower-income families, and thus provide minimal incentives to the households who, on average, most need to save more to provide for their basic needs in retirement. The tax preferences instead give the strongest incentives to higher-income households who least need to save more to achieve an adequate retirement living standard. These higher-income households are also disproportionately likely to respond to pension tax incentives by shifting assets from taxable to tax-preferred accounts, with the net result that the pensions serve to shelter income from taxation, rather than act as a vehicle to increase saving.

The saver’s credit takes a step toward leveling the pension playing field in favor of moderate- and lower-income workers. The matching rates under the saver’s credit reflect a “progressive” structure—that is, the rate of government contributions per dollar of private contributions falls as household income rises, exactly the opposite of the incentive structure created by traditional pension tax preferences. This is currently a relatively minor exception to the general pattern: The bulk of recent policy changes have expanded retirement savings opportunities for higher-income workers, and the Treasury Department estimates that the tax expenditures associated with retirement saving preferences in 2005 total roughly $150 billion, of which only about $1 billion is attributable to the saver’s credit. Leading policymakers on the Ways and Means Committee, including Representatives Rob Portman (R-Ohio) and Benjamin Cardin (D-Md.), are actively exploring possible expansions of the saver’s credit.

How the Credit Works

Without the saver’s credit, a $100 401(k) contribution by a taxpayer in the 35 percent marginal federal income tax bracket generates a $35 exclusion from income, resulting in a $65 after-tax cost to the taxpayer. In contrast, for a taxpayer in the 15 percent marginal bracket, the same $100 401(k) contribution generates only a $15 exclusion from income, resulting in an after-tax cost of $85. The tax deduction is worth more to the higher-income household. However, if the lower-income taxpayer qualifies for a 20 percent saver’s credit, the net after-tax cost is $65 ($100 minus the $15 effect of exclusion minus the $20 saver’s credit). Thus, the saver’s credit works to level the playing field by increasing the tax advantage of saving for moderate- and lower-income households.

The implicit matching rate generated by the credit is significantly higher than the credit rate itself. The 50 percent credit rate for gross contributions, for example, is equivalent to having the government match after-tax contributions on a 100 percent basis. Consider an individual who contributes $2,000 to a 401(k) plan or IRA. The saver’s credit reduces federal income tax liability by $1,000 (50 percent of $2,000). The net result is a $2,000 account balance that costs the individual only $1,000 after taxes (the $2,000 contribution minus the $1,000 tax credit). This is the same result as occurs if the net after-tax contribution of $1,000 were matched at a 100 percent rate: The individual and the government each effectively contributes $1,000 to the account. Similarly, the 20 percent and 10 percent credit rates are equivalent to a 25 percent and 11 percent match, respectively (see table 1). 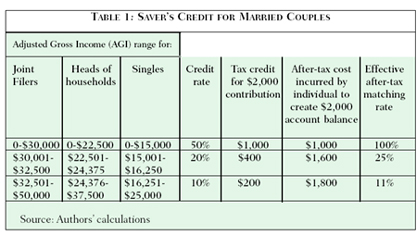 IRS data indicate that more than 5 million tax filing units claimed the credit in 2002, the first year it was in effect, and estimates from the Tax Policy Center suggest that almost 60 percent of the benefits accrue to filers with AGI between $10,000 and $30,000. Moreover, some early evidence suggests that the saver’s credit may be raising saving: In one survey of 401(k) plan sponsors in 2002, representatives of 71 percent of the plans indicated that they believed the saver’s credit had already increased participation in their plan. Tax preparer H&R Block has indicated that it claimed the credit in 2002 on behalf of more than a million clients, and a representative of H&R Block has been quoted as saying that many of those clients were first-time contributors to a retirement savings plan.

Why the Saver’s Credit Makes Sense

The saver’s credit focuses its incentives on lower- and moderate-income households. This makes sense for two reasons. First, such incentives are more likely to bolster long-term economic security and reduce elderly poverty, since higher-income households already tend to have substantial assets and tend to be better prepared to provide for their basic needs in retirement than other households. For some low-income families, income may be so modest that it is impossible to save after paying for necessities. Yet according to a study by Jeanne Hogarth and Chris Anguelov of the Federal Reserve Board, 60 percent of households at or below the poverty line indicate that they save at least something. Experience with another program that provides tax breaks and matching funds to encourage saving among participating low-income families suggests that poor families will save, at least to some degree, if presented with incentives to do so.

Second, a key issue is the impact of tax incentives for saving on national saving. National saving is the sum of public saving and private saving. All else being equal, every dollar of forgone revenue reduces public saving by one dollar. Consequently, for national saving to increase, private saving must increase by more than one dollar in response to each dollar in lost revenue. To raise private saving, the incentives must not simply cause individuals to shift assets into the tax-preferred pensions but must generate additional contributions financed by reductions in spending.

The saver’s credit could also complement efforts to channel the forces of inertia in favor of saving, rather than against it. For example, evidence suggests that participation rates are significantly higher if workers are enrolled in a 401(k) plan unless they specifically opt out of the plan, compared to plans in which workers are not enrolled unless they specifically opt in. This type of automatic enrollment expands the application of the saver’s credit by making it available to employees who would not otherwise contribute to a 401(k) and would not otherwise receive the credit. By the same token, the saver’s credit may encourage wider use of automatic enrollment because the credit makes participation more valuable and hence more acceptable to employees without requiring the employer to make any additional matching contributions.

Another way of making it easier to save also interacts in a beneficial manner with the saver’s credit. The Bush administration, in its fiscal 2005 budget, proposed that taxpayers be allowed to choose to have their tax refunds deposited into more than one account. This split refund proposal is highly promising as a mechanism for raising saving: Refunds are a significant potential source of savings, yet many families are reluctant to have their entire refund deposited to a tax-preferred savings account.

If the Bush administration’s proposal were implemented, the saver’s credit would increase the incentive for eligible households to deposit at least part of a refund into a retirement account.

Despite its relatively auspicious beginning and its solid policy justification, the saver’s credit has several important shortcomings that should be addressed by policymakers:

The saver’s credit offers the potential to help correct the nation’s “upside down” tax incentives for retirement saving, in which the tax system provides the weakest incentives for participation in tax-preferred saving plans to those who most need to save for retirement and who are more likely to use tax-preferred vehicles to increase net saving than to serve as a shelter from tax.

The limited experience with the saver’s credit has been encouraging, but the credit could be strengthened by making it refundable, making it permanent, and expanding it to provide more powerful incentives for a substantial number of middle-class households. These changes would further help lower- and middle-income families save for retirement, reduce economic insecurity and poverty rates among the elderly, and raise national saving.