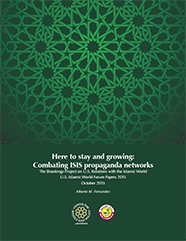 As of early 2015, jihadi groups in Syria have recruited over 20,000 foreign fighters to their cause, the overwhelming majority of who have joined the ranks of the Islamic State (also known as ISIS). A major reason for the group’s recruiting success has been its deft use of propaganda and social media, expanding its scope from the more esoteric conflict in Iraq and Syria to a worldwide appeal. Efforts to blunt ISIS propaganda have been tentative and ineffective, despite major efforts by countries like Saudi Arabia, the United States and the United Kingdom, and even al-Qaida. Counter-messaging efforts, such as those by the U.S. Department of State’s Center for Strategic Counterterrorism Communications (CSCC), have been dwarfed by the sheer size of the ISIS footprint. No effort to date has matched the tailored nature, the scope, nor the electrifying content of the Islamic State’s material.

To counter the Islamic State’s propaganda, governments should focus more on the content of counter- messages rather than their dissemination. Let private citizens circulate content they find effective. If governments want to facilitate the circulation of counter-messages, they should collaborate with private citizens by making it easier for them to find such content. As for social media companies, they should be shamed into truly enforcing their terms of service to stop the Islamic State and its supporters from distributing their propaganda so easily.

Better counter-messaging techniques will only go so far. Governments need to develop policies that will change the conditions which make propaganda effective in the first place. ISIS propaganda and its effectiveness derive from the reality on the ground in Syria, Iraq, and other countries where the organization has planted its flag, not the other way around.

Dispatches from Africa’s COP: Kenyan youths on the frontlines of climate adaptation