Editor’s Note: The following report was first published by the International Drug Policy Consortium, as part of its ‘Modernizing Drug Law Enforcement Project,’ in February 2013. 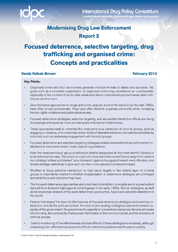 Extensive criminality and illicit economies generate multiple, at times intense, threats to states and societies – to their basic security and safety, and to their economic, justice, and environmental interests. High levels of criminality, particularly criminal violence, tend to eviscerate law enforcement capacities as well as the social capital and organizational capacity of civil society and its ability to resist organized crime. Especially in the context of acute state weakness where underdeveloped and weak state institutions are the norm, goals such as a complete suppression of organized crime may be unachievable. But even in countries with strong law enforcement institutions, law enforcement efforts to suppress the incidence of criminality, particularly of transactional crimes, such as drug trafficking (as opposed to predatory crimes, such as homicides) have at times not succeeded and have generated negative side effects and externalities, such as human rights and civil liberties violations and overcrowded prisons.

Zero-tolerance approaches to crime, popular around the world since the late 1980s, have often proven problematic. They have produced highly unequal outcomes and often greater police abusiveness. Particularly, in the context of weak law enforcement institutions and high criminality, zero-tolerance approaches have mostly failed to reduce crime, while generating new problems. Allocating resources to essentially repressive programs frequently takes place at the expense of investigative capacity. Critically, the lack of prioritization of crimes and criminal groups often diverts police focus from the most violent and serious offenses and most dangerous criminal groups.

Focused-deterrence strategies, selective targeting, and sequential interdiction efforts are being increasingly embraced as more promising law enforcement alternatives. They seek to minimize the most pernicious behavior of criminal groups, such as engaging in violence, or to maximize certain kinds of desirable behavior sometimes exhibited by criminals, such as eschewing engagement with terrorist groups. The focused-deterrence, selective targeting strategies also enable overwhelmed law enforcement institutions to overcome certain under resourcing problems. Especially, in the United States, such approaches have produced impressive results in reducing violence and other harms generated by organized crime groups and youth gangs. Such approaches have, however, encountered implementation difficulties elsewhere in the world.