On February 19, Brookings hosted an event discussing the report. Watch the video.

“Our ice is just as cold.” This expression, heard in corners of Black neighborhoods to articulate the choice between a Black-owned business and a white one, reminds customers that racism distorts our sense of quality. In a more perfect union, profits earned from a business would reflect the effort and labor put into it. The drag of racism on an economy not only cuts into individual owners’ profits, it robs local consumers and municipalities of the amenities and services neighborhoods gain from increased revenues. Further, a biased market cuts into the heart of the American Dream by negating the hard work, agency, and self-determination of business owners.

Research on small business outcomes finds that location matters. However, in the United States, residential segregation patterns by race have created peculiar neighborhood conditions for businesses to work within. To better understand how consumer-oriented markets work in Black neighborhoods, this report studies the financial performance and customer ratings of private enterprises across ZIP codes in 86 metropolitan areas across the country with large Black populations, and is part of a larger project to understand how assets are valued (and undervalued) in America’s Black neighborhoods.

Among other important findings, the report finds that highly-rated businesses in Black-majority neighborhoods experience annual losses in business revenue as high as $3.9 billion. The report’s methodology matches Yelp data at the establishment level to financial performance data from the National Establishment Time-Series (NETS) Database.

[Black entrepreneurs] may have the idea, but we just sit on it because we don’t have the capital. – Dorian Moorefield, owner, Grandma B’s restaurant

Black-owned businesses start with approximately a third less capital than their white peers and have difficulties raising private investments from mainstream investment systems. Only 1% of Black business owners obtain loans in their founding year, compared to 7% of white business owners.

Untapped entrepreneurial potential abounds in Black communities throughout the country 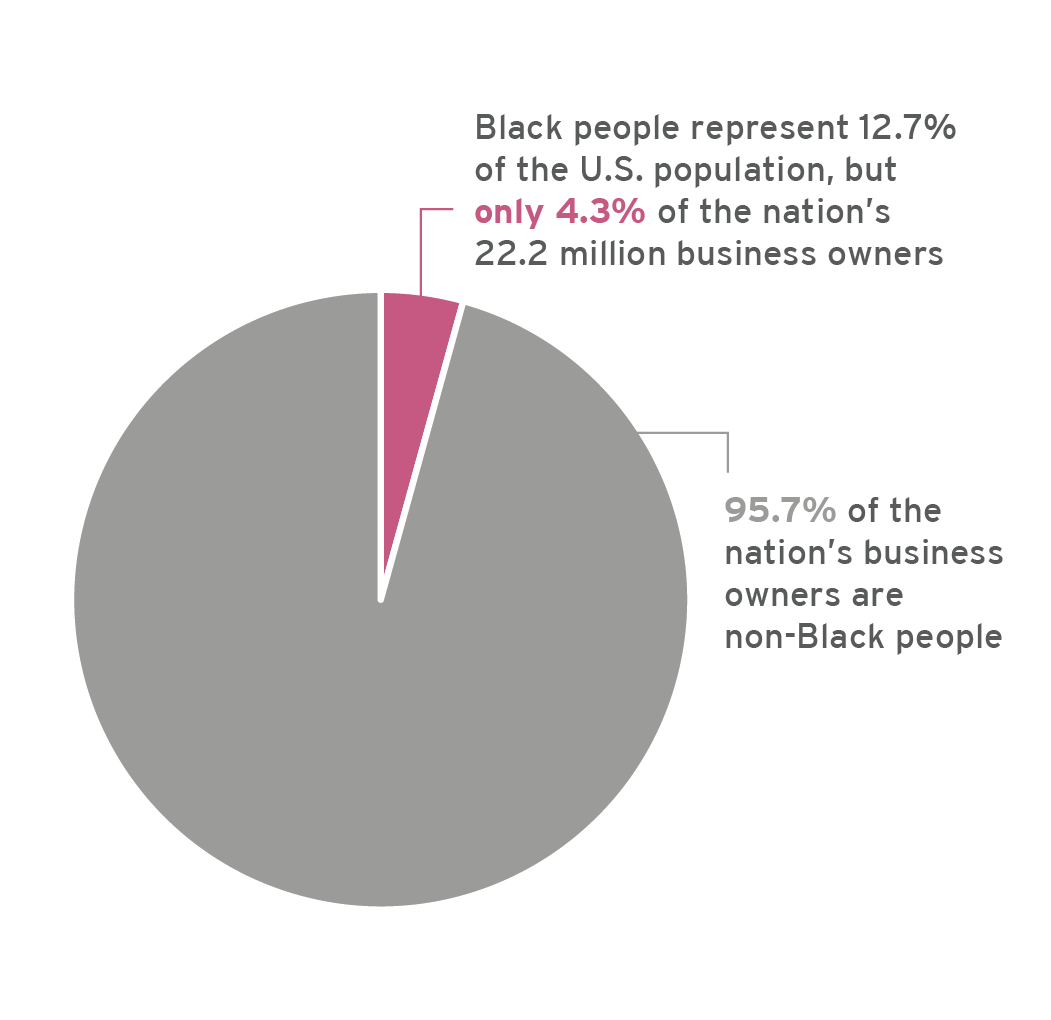 We don’t cook for reviews per se; We try to cook every dish to perfection. If that’s the case the reviews will come.

Businesses with four to five stars on Yelp experienced an average growth rate of 8.8% from 2016 to 2019. This compares to growth of just 6.2% for businesses with fewer than four stars. 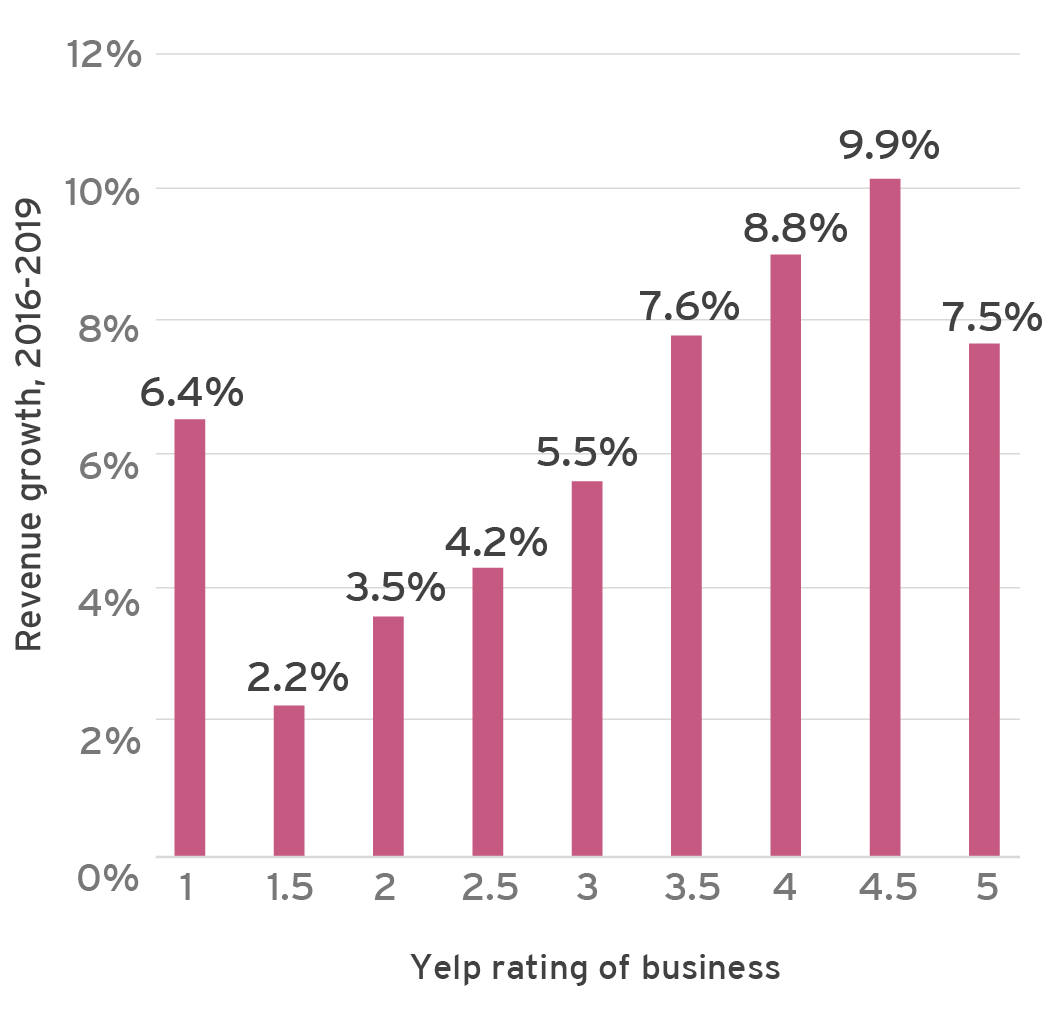 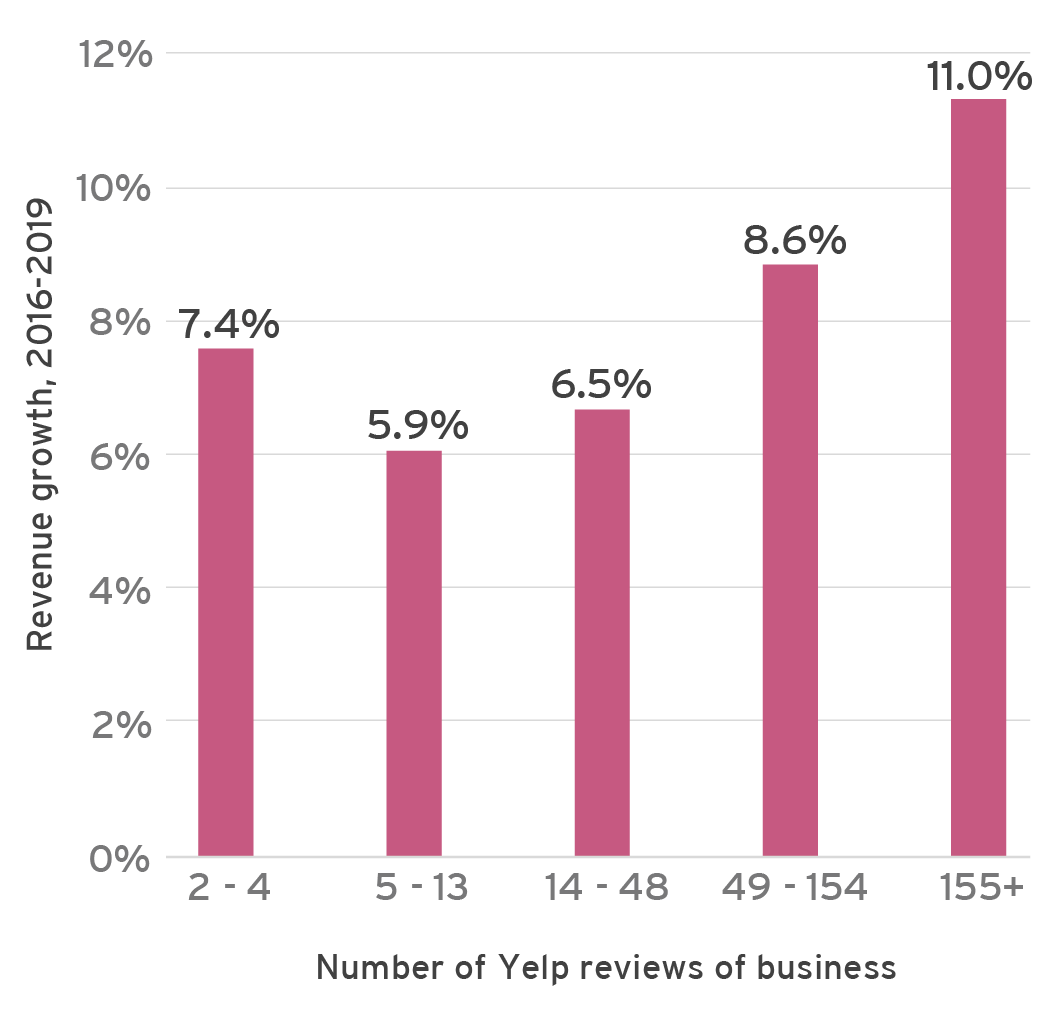 I’m very picky…I try to cook for people like me.

Businesses in Black neighborhoods receive lower Yelp ratings than others 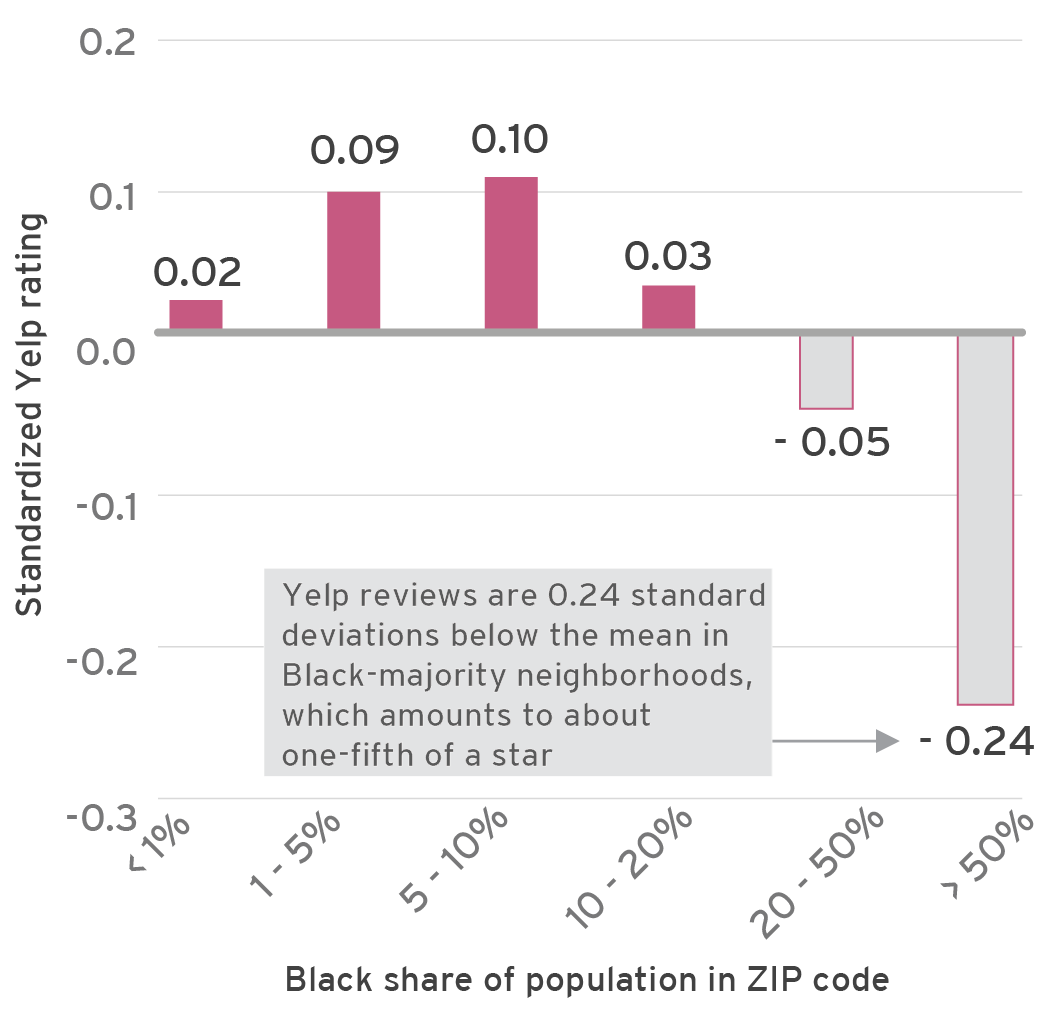 Businesses in Black neighborhoods receive fewer Yelp reviews than others 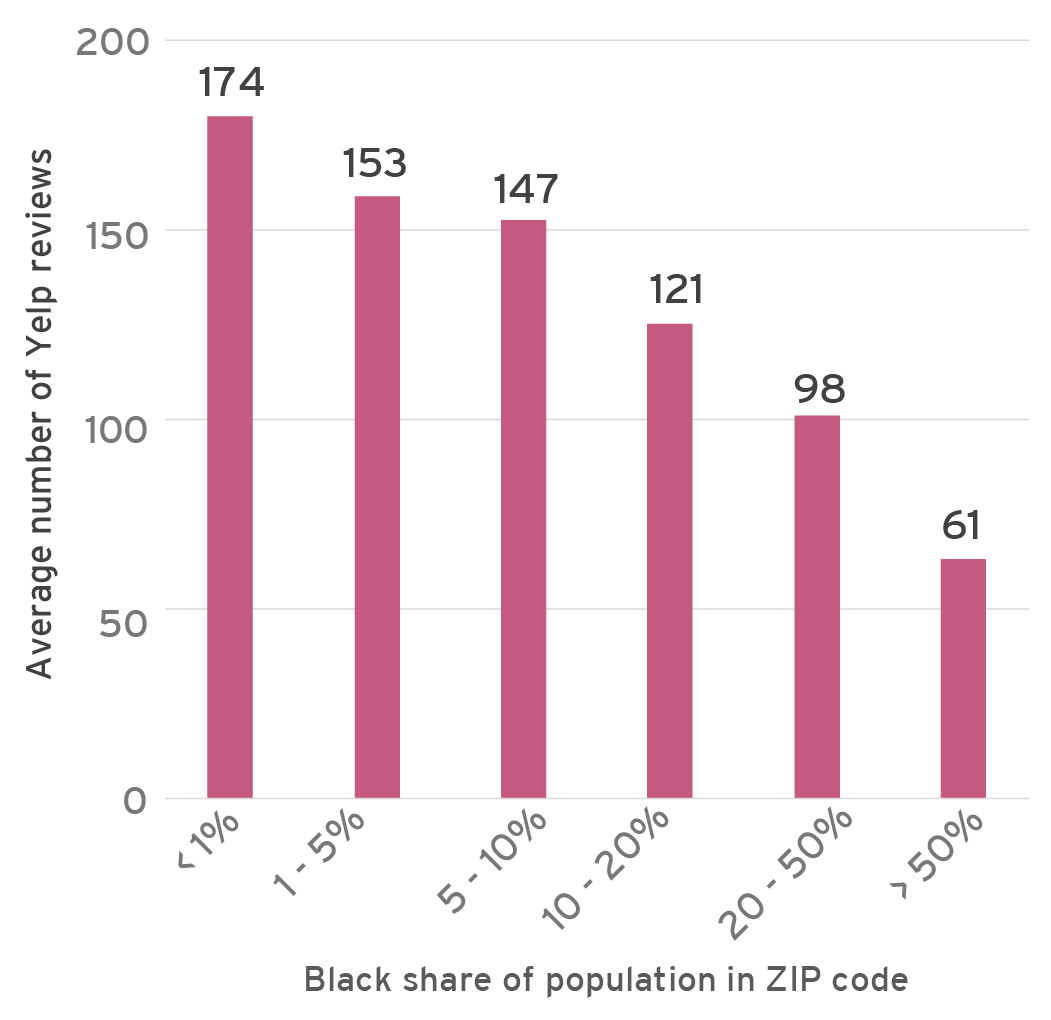 This effect persists after controlling for other neighborhood characteristics such as the level of education of residents, total income in the ZIP code, average commute times to work, and the age of the housing stock. Providing high-quality customer service and products does not result in financial rewards in Black neighborhoods to the same extent as in other neighborhoods. 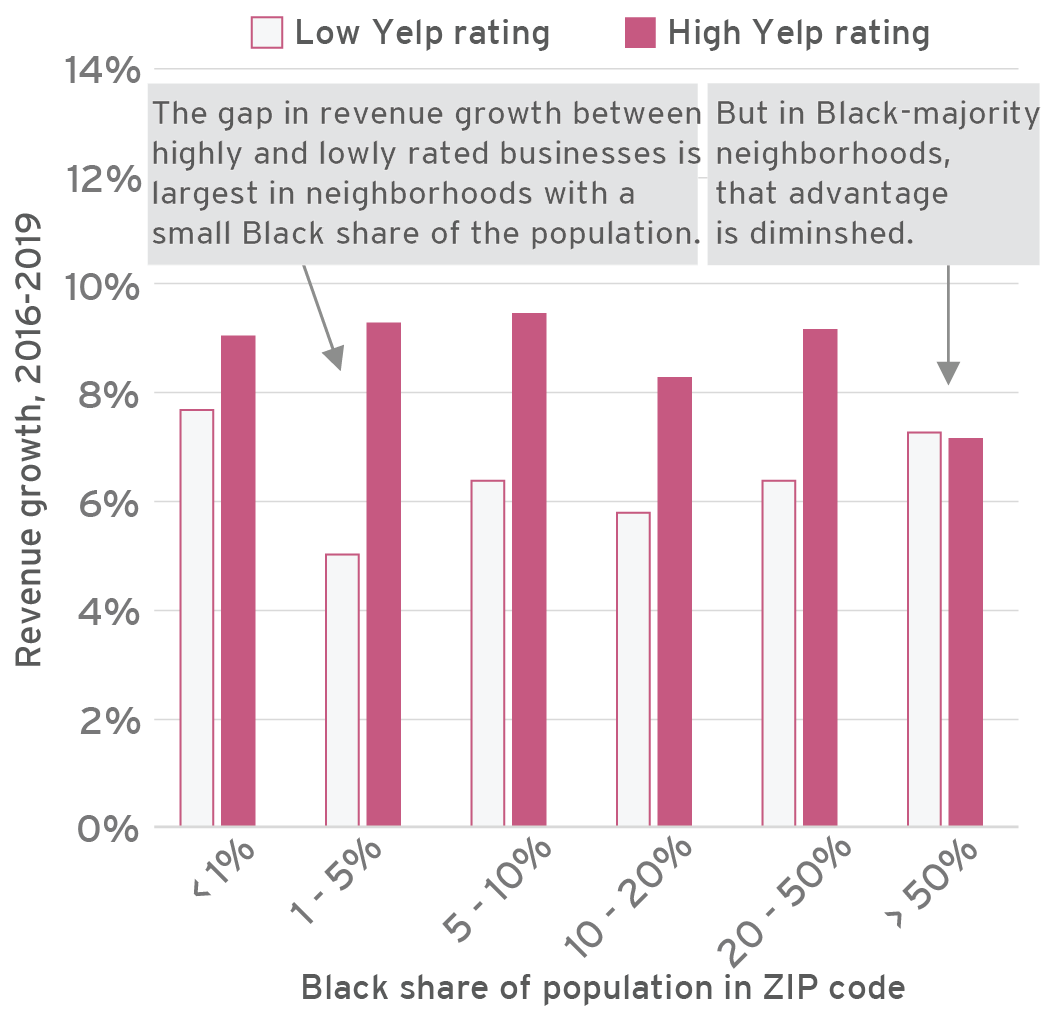 I’ve learned that a great location will out do great food.

Businesses in Black-majority neighborhoods lose $1.3B to $3.9B in revenue per year

To live out our democratic ideals and to achieve racial equity in the United States, institutions and markets critical to capital flows must give equal access to Black people. Historic discrimination distorts how we value Black people and the assets in Black communities, robbing them of the ability to lift themselves up the social ladder and build stronger neighborhoods. Negative perceptions that are shaped by racism put drags on markets that hurt Black people and the communities they live in.

In this report, we found evidence that racial discrimination distorts local customer-facing firms in ways that harm business owners and the Black-majority neighborhoods in which they sit. Our finding that even high-performing businesses receive less attention from Yelp reviewers and experience slower revenue growth means that the potential for wealth creation through entrepreneurship is hampered by a dim view of Black neighborhoods.

While the national patterns in Yelp reviews play out differently across metropolitan areas, there are practical things that cities and local governments can do to counteract the devaluation of businesses in Black communities. They should invest in city infrastructure near highly rated businesses in Black neighborhoods and provide creative financing solutions for commercial spaces in Black neighborhoods. Local governments should partner with businesses, real estate developers, and building owners to incentivize the renovation of business facades and buildings and ensure that unnecessary bureaucratic and zoning restrictions are removed.

Fundamentally, we must find ways to restore the value of Black neighborhoods themselves, which has been reduced by racism. The economy, and its people, stand to gain from anti-discrimination, anti-racist policies that increases capital flow to businesses in Black neighborhoods.

Special thanks to the owner of Grandma B’s restaurant, Dorian Moorefield.

The devaluation of assets in Black neighborhoods

America’s formerly redlined neighborhoods have changed, and so must solutions to rectify them