Inadequate demand and inadequate education, relative to available occupations, are both ham­pering economic recovery in U.S. metropolitan areas. With a still weakened private sector, stra­tegic public investment and regional economic diversification can help address the first problem. Yet even when the economy recovers, longer-term “structural unemployment” will linger in some metropolitan areas because of mismatches between the supply of, and demand for, educated workers. Solutions to that problem include boosting educational attainment, enhancing the skills of workers, and increasing demand for less educated workers by providing public goods needed by industries like manufacturing and the “green” economy. 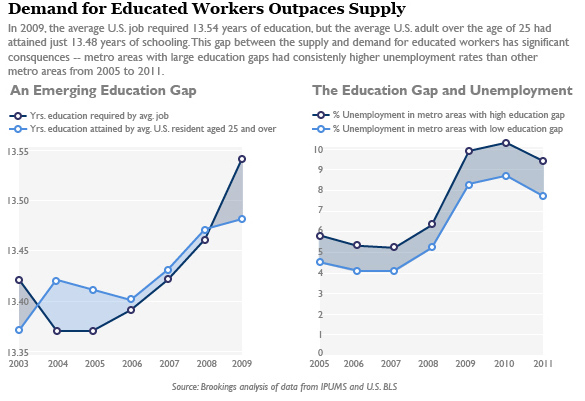 An analysis of the gap between the supply and demand for educated workers, and its relation­ship to unemployment, particularly for the 100 largest metropolitan areas in the United States, finds that:

The years of education demanded by the average U.S. job grew slowly but steadily from 2005 to 2009 and slightly outpaced growth in educated labor supply during the reces­sion. At the height of the recession in 2009, the average U.S. job required 13.54 years of education, up from 13.37 in 2005. The increase reflected layoffs in less-education intensive industries such as construction and manufacturing, amid job gains in industries like health care, education, and professional services that demand more education.

Metro areas with larger education gaps exhibit greater differences in unemployment rates between highly educated and less educated workers. In large metropolitan areas, the differ­ence in unemployment rates between workers with bachelor’s degrees and those without high school diplomas ranged from 2.8 percentage points in Poughkeepsie, NY to 14.7 percentage points in Detroit.