In designing monetary policy, many countries assign
greater weight to the role of the stock of money in
the economy. However, during the last three decades,
measurement of aggregate money has become a subject
of extensive research and policy debate. The standard
monetary aggregates (such as M1, M2 and M3
money), published by central banks and used for monetary
policy purposes have come under criticism that
they suffer from aggregation bias and do not effectively
capture changes in the financial sector. It is in this regard
that Divisia monetary aggregates—also referred
to as monetary services indices (MSI)—have attracted
interest, and thus are presented as an alternative
or complement to simple sum monetary aggregates
(Barnett, 1980; Barnett, Offenbacher and Spindt, 1984;
Barnett, Fisher, and Serletis, 1992). A Divisia monetary
index measure of money is based on an alternative
method of aggregation where different weights are attached
to monetary (sub)components, reflecting the
flow of monetary services (Barnett,1982).The simple
sum monetary aggregates treat all (sub)components
of money as being the same in their “moneyness.” The
components, including currency, demand deposits,
and savings and time deposits are given equal weights
rather than unequal ones that reflect the monetary aggregates’
usefulness in making transactions or flow of
monetary services. Simple sum aggregates have thus
been criticized for failing to account for substitution
among components of money. 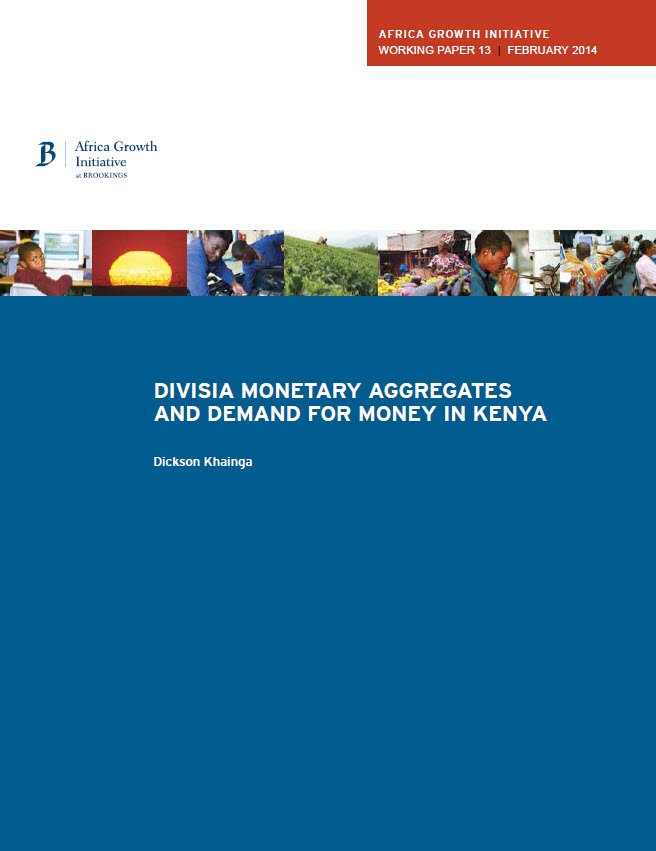 The purpose of this paper is to construct Divisia monetary
aggregates for Kenya and compare them with
standard simple sum monetary aggregates. The paper
also attempts to assess the usefulness of Divisia aggregates
for monetary policy purposes by examining
their importance in the demand function for money.
This study is of interest to Kenya because the Central
Bank of Kenya (CBK) has largely relied on targeting
monetary aggregates in the conduct of monetary
policy. In addition, various financial sector reforms
and innovations have taken place that might not be
adequately captured by the simple sum aggregates.
The CBK has sought to enhance the effectiveness of
monetary policy by changing the policy framework,
but Divisia monetary aggregates have not been tried
as an alternative or complement to the simple sum
aggregates. In the 1990s, M2 (currency in circulation
plus demand deposits) money was the intermediate
monetary policy target. However, following financial
deregulation and further opening up of the economy, the relationship between M2 and nominal gross domestic
product (GDP) was found to be unstable. By
the end of 1998, the Central Bank of Kenya had shifted
to M3 (M2 plus foreign currency deposits) as the policy
target (Rotich, Kathanje and Isaya, 2007). In October
2011, the Central Bank of Kenya adopted a new monetary
policy framework that gives more prominence
to its policy rate—the Central Bank Rate (CBR) (IMF,
2013). We expect that publishing Divisia monetary aggregates
for Kenya will encourage policy debate and
research on their importance.

In the 1980s and 1990s, Kenya undertook various
financial sector reforms under structural adjustment
programs supported by the International Monetary
Fund (IMF) and the World Bank. Key reforms included
deregulation and liberalization of interest rates and
the capital account, and a shift to a floating exchange
rate. In recent years, the financial sector has experienced
various innovations and developments that may
have impacted monetary aggregates. These include
financial innovations such as automated teller machines
(ATMs), credit and debit cards, mobile banking
and mobile money services. The composition of
monetary assets has also changed significantly. For
instance, currency outside banks as a percentage of
M3 declined from about 12 percent at the end of 1995
to about 8 percent by the end of 2011. The share of
foreign currency deposits in M3 doubled from about 6
percent in 1995 to about 12 percent at the beginning
of 2002 and increased further to 16 percent towards
the end of 2011. The importance of non-bank financial
institutions (NBFIs) has also been declining. In early
1990s, NBFIs accounted for about 24 percent of total
quasi-money, and by early 2012 the share stood at
only 2 percent. We expect that Divisia monetary aggregates
will capture these changes through their different
weighting as opposed to the simple sum aggregates
based on equal weights.

The technique of cointegration developed by Johansen
and Juselius (1990) is used to analyze and compare
the underlying long-run relationships between the constructed
Divisia money index, simple sum aggregates,
output, and interest rates, through the estimation of
a money demand function. The rest of this paper is
organized as follows. In Section 2 we provide an overview
of the empirical literature on usefulness of Divisia
monetary aggregates. Section 3 discusses how Divisia
monetary aggregates are constructed, and compare
them to simple sum aggregates. In Section 4, we assess
the underlying long-run relationships through
cointegration analysis. Section 5 provides an interpretation
of the results and conclusion.