Two weeks ago, we wrote a paper for Economic Studies at Brookings that documented the decline in business dynamism in the United States during the last few decades. We of course feel that this is an important issue, but it would be an understatement to say that we have been surprised at the level of interest our work has received.

While we’re happy to have invoked a spirited debate, we also don’t agree with some of the analysis we’ve seen of the research. We’d like to use this opportunity to respond to some of it.

To recap, our report showed a persistent decline in the rate of new firm formations and in the job reallocation rate—a broad measure of labor market churn that results from firm formations, expansions, contractions, and failures (what we and other economists call “business dynamics”). We also showed that these declines were nearly universal across the U.S. states and metros during the 30 year period between 1978 and 2011, as well as across a broad range of industries and firm sizes.

In short, the decline in dynamism and entrepreneurship doesn’t appear to be isolated to any one segment of the economy or region, but instead has been a widely shared experience.

What we did not advance was a cause. Getting at why individuals are choosing not to launch their own companies and instead opt for employment at incumbent firms is an inherently tricky proposition. But we, and others, are making advances at getting to an answer, and hope to have some new findings to report in the future. For now, it is important to document what’s happening—the response from our report seems to confirm that.

Unfortunately, not advancing a cause also left the door open for a lot of speculation as to what is driving the decline in business dynamism—some entirely valid, some without merit in our view, and some in-between. We address in the next sections several of the more important questions or critiques. 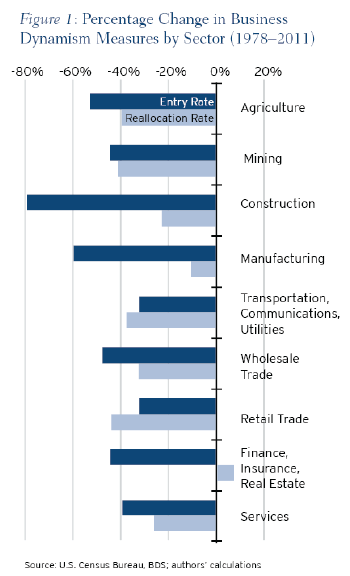