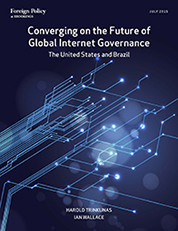 The crisis in U.S.-Brazilian relations provoked by Edward Snowden’s 2013 revelations of U.S. espionage via the global Internet, and Brazil’s initial threat to respond in ways that were detrimental to the integrity of the Internet, serve to highlight the increasing intersection of foreign policy and Internet governance. In a new Brookings report, Harold Trinkunas and Ian Wallace document the remarkable story of how, in the wake of the crisis, Brazil and the United States found a way to work together constructively to preserve and advance the global Internet freedom agenda.

• The United States’ pioneering role in the Internet’s creation influenced the development of a multi-stakeholder approach to Internet governance in which the private sector, civil society, and governments participate in decision making on an equal footing.

• This model has drawn criticism from other major powers, including Brazil, India, Russia, and China, which have traditionally advocated for multilateral governance through existing international institutions. This approach privileges the role of governments over other important stakeholders.

• Brazil’s decision to host an international multi-stakeholder conference on Internet governance in April 2014, known as NETmundial, signaled a change in course on global internet governance and was a notable departure from Brazil’s traditional Internet diplomacy.

• Brazil’s leadership in the subsequent NETmundial Initiative has the potential to open space for other emerging global powers, such as India, to move toward supporting an agenda that preserves Internet freedom and innovation, and away from the authoritarian critique of contemporary Internet governance by China and Russia.

• The Obama administration should stand firm on its current policy toward the transition of the Internet Assigned Numbers Authority (IANA), and should not give in to congressional voices that want the U.S. government to retain oversight of the IANA function.

• The United States should work toward bringing the World Summit on the Information Society (WSIS) review process to its conclusion in the near future and discourage any possibility of its extension. The WSIS process has outlined (repeatedly) the fractures among states on the issue of global Internet governance, and it is time to move beyond the present stalemate.

• Brazil should continue to support the multi-stakeholder model as embodied in the NETmundial conference and the subsequent Initiative rather than revert back to its traditional preference for multilateralism. The Initiative offers a Brazil an avenue through which it can showcase its successful domestic Internet governance model and assist countries struggling with technical or public policy issues associated with Internet governance.

• The success of the NETmundial Initiative may require some reforms to encourage greater transparency and bottom-up participation. Should it eventually fail, there remains a need for an organic multi-stakeholder process, led by civil society and the private sector together with government representatives, to assist developing countries in resolving salient Internet public policy issues.

Battle lines for the future of the internet

How Biden can make his internet freedom agenda a success