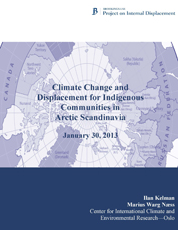 This paper explores anthropogenic climate change influencing displacement/migration for the Saami in Finland, Norway and Sweden near or above the Arctic Circle. Norway plays a large role throughout this discussion because (i) most residents in Arctic Scandinavia live in Norway, (ii) most indigenous peoples in Arctic Scandinavia live in Norway, and (iii) Norway is the only country of the three which has Arctic coastline.

The Saami have inhabited Scandinavia since the first human arrivals in the region as the glaciers retreated from the last ice age. Today, the Saami number approximately 50,000-100,000, although no formal censuses based on ethnicity exist. This means that defining who is Saami for statistical purposes is not always straightforward and often refers to those either speaking or having ancestors who spoke the Saami language.

Saami are frequently associated with reindeer husbandry as a livelihood, but currently only around 10 percent of Saami are currently actively involved in it (Josefsen, 2010). Migration has long been a way of life in Arctic Scandinavia and the Saami reindeer herders have been nomadic or semi-nomadic for centuries. Mobility is central to the nomadic reindeer herding practiced by many Saami, but artificial boundaries such as private property, roads, and railways can inhibit the needs and routes of traditional mobility. It should also be noted that non-Saami migrated into the region over millennia and indigenous and non-indigenous peoples from around the world continue to migrate into the region.

In Norway, national policy (Government of Norway, 2009b) further supports people living throughout the country by providing financial incentives and supporting public services. For example, during the 1970s, most of the reindeer herders had moved into modern houses in central areas in the northernmost county of Finnmark due to official policies. The policy requiring nine years of schooling for children also made it impossible for whole families to live close to their herds year-round (Riseth and Vatn, 2009). Government policies made it possible for reindeer herders to attain a so-called “modern” standard of living in Norway (Nilsen and Mosli, 1994; Riseth and Vatn, 2009) which consequently changed their migratory lifestyle.

As largely rural areas, Arctic Scandinavia in all three countries experiences significant levels of outmigration. In particular young people often leave the region in search of education, larger settlements, or more varied livelihoods. Migration is often initially seen as temporary (for example, for university or independent travel) but may become long-term or permanent.

In fact, migration in Arctic Scandinavia displays all forms found in the mobility literature, including: in-migration, out-migration, and circular migration; and both temporary and permanent migration. Migration within the region also occurs, with people from one Arctic Scandinavian settlement easily moving to another for family or livelihood reasons, irrespective of national boundaries, facilitated by the fact that Scandinavians are permitted to live and work in other Scandinavian countries.