For years China has been known as a destination for foreign direct invest- ment, as multinationals flocked there to build export platforms and take advantage of its fast-growing market. Now, however, it is China’s outbound foreign direct investment (OFDI) that is shaping the world. In the first quarter of 2015, China claimed its largest-ever share of global mergers and acquisitions (M&A), with mainland companies’ takeovers of foreign firms amounting to US$101bn, or 15% of the US$682bn of announced global deals. In three months, China recorded more outbound investment transac- tions than in the whole of 2015, when US$109bn in deals were announced.

These figures probably overstate the true level of capital flows, since some announced deals inevitably fail to reach fruition. But whatever the levels, it is clear that China’s outbound investment is rapidly growing, and that its share of global direct investment flows is among the largest of any country. 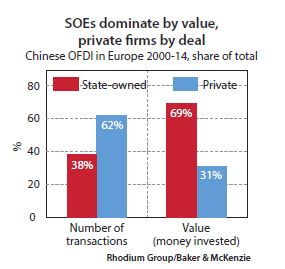 The rise in China’s direct investment in Europe is especially striking. According to a recent report by law firm Baker & McKenzie and consultancy Rhodium Group, the total stock of Chinese investment in Europe increased almost ten-fold from US$6bn in 2010 to US$55bn in 2014. In 2015 alone, Chinese OFDI in Europe increased by 44 percent (with deals such as Italian tire manufacturer Pirelli’s US$7.7bn takeover by ChemChina). Total flow of US$23bn exceeded China’s investments in the US, which were US$17bn in the same year. This year could see an even more dramatic jump, if ChemChina’s pro- posed US$46bn takeover of Swiss agro-technology firm Syngenta is approved by regulators.

There are two main reasons why Chinese investors favor Europe over the US. First, the issue of Chinese direct investment is less politicized in Europe. A handful of high-profile Chinese investments in the US have been blocked for political reasons, and the national security review process of the Committee on Foreign Investment in the United States poses an obstacle for some types of acquisitions, especially by Chinese state-owned enterprises (SOEs). Europe lacks a similar review process, and this perhaps explains why SOEs represent nearly 70% of Chinese OFDI in Europe, but less than half in the US. Second, Europe’s ongoing economic and financial difficulties since the global financial crisis of 2008 mean there has been a hunger for Chinese cash to finance infrastructure or bail out debt-ridden firms.The flows are impressive, but it is important to remember that on a stock basis, China’s aggregate investment in Europe is still fairly modest. By the end of 2014, China’s cumulative OFDI represented only 3-4% of all FDI in Europe, and the pool of workers directly affected by Chinese FDI was a mere 2% of the number of Europeans working in American-owned firms in Europe. The rising trend of Chinese investment, however, raises some interesting economic and political questions for European leaders.

Moving up the value chain…

What motives, aside from the sheer availability of cash, are driving this enormous wave of Chinese outward investment? A review of China’s OFDI in Europe over the past decade points to five distinct strategies. Some of these are similar to the strategies seen in earlier waves of cross-border investment by Western, Japanese and South Korean companies; others seem to be more China-specific. They also display widely divergent reliance on political leverage—with SOE investments, unsurprisingly, being the most politically driven.

The first strategy is driven by a desire to move from cheap products to more sophisticated ones. An exemplar is Haier, the world’s largest white goods manufacturer. Haier’s development closely tracks that of Japanese and South Korean consumer appliance makers: it first concentrated on making cheap copies of established products, for sale in the Chinese market. It gradually moved up to more sophisticated and innovate products and services and began to export more aggressively.

Haier came to cross-border M&A relatively late, and has used it main- ly to scale up its core “made-in-China” portfolio and accelerate its move up the value chain. Its first acquisitions came in 2012, when it bought a part of Sanyo’s Asian operations and New Zealand’s Fisher & Paykel. After a failed effort to acquire bankrupt European white-goods firm FagorBrandt in 2014, it bought GE’s consumer appliances business for US$5.4bn in January 2016. Political backing for Haier’s overseas expansion has been limited, probably because of the low political importance of the white goods sector.

A second strategy, exemplified by telecoms equipment maker Huawei Technologies, is a straightforward effort to raise margins by diversifying out of the low-margin Chinese market into higher-margin foreign ones. Huawei has derived more than half its sales from abroad for over a decade, and has gradually increased its presence in European markets, in part through loose alliances with major clients such as BT, Orange, Deutsche Telekom, and Telefónica. It has also moved quickly into the device sector. From tablets to smartphones and 3G keys, its products are now spreading across Europe, as are its greenfield investments in European R&D centers. Its efforts to expand through M&A have been hampered by its image as an arm of the Chinese state—although privately owned, it has benefited from huge lines of credit from Chinese policy banks, and has never put to rest rumors of close ties with the People’s Liberation Army.

The third model essentially involves technology acquisition that enables a Chinese firm both to bolster its position at home and create strategic opportunities abroad. Notable examples include personal computer maker Lenovo (which bought IBM’s PC division), carmaker Geely (which acquired Volvo’s passenger-car unit), and more recently ChemChina (with its purchases of Pirelli and Syngenta). The technology-acquisition strategy is much more characteristic of Chinese firms than of Japanese or South Korean companies, which mainly preferred to build up their technological know-how internally, or through licensing arrangements. Even though many of the Chinese acquirers in these deals are private, they are often able to mobilize enormous state support in the form of generous and low-cost financing.

The fourth internationalization model is characteristic of the hospi- tality industry and is one we dub (perhaps controversially) “Orientalist.” Essentially this involves the acquisition of established high-end hotel and leisure brands, with the ultimate aim of reorienting them to cater to a growing Asian—and especially Chinese—clientele. Examples include Shanghai-based Jinjiang International’s recent purchase of the Louvre Hotels group and of 11.7% of Accor’s hotel business. Hong Kong hotel chains Shangri-La, Mandarin and Peninsula have focused their expansion over the past three years in Europe, buying high-end assets in Paris and London. Dalian Wanda, a conglomerate with interests in real estate, retail and cinemas has plans for a series of major mixed-use projects in the UK and France. Like many such projects in China, these are designed to offer a combination of commercial, residential, shopping and recreational facilities. These culturally-oriented acquirers have also benefited from generous financing from China’s state-owned banks.

The final strategy is a “national champions” model, under which big SOEs use political and financial support from the government to make acquisitions that they hope will vault them into positions of global market leadership. A noteworthy recent example in Europe Dongfeng Motor’s purchase of 14% of PSA, the parent company of Peugeot.

The wave of Chinese investment creates several challenges for European companies and policymakers. For firms, the sudden appearance of hungry and well-financed Chinese acquirers has prompted incumbent multinationals to step up their own M&A efforts, in order to maintain their market dominance. Moves into the European market by China’s leading construction equipment firms, Zoomlion and Sany, most likely prompted the purchase of Finnish crane company Konecranes by its American rival Terex. Similarly, ChemChina’s unexpected bid for Syngenta has caused disquiet among European chemical firms, and probably motivated Bayer’s subsequent bid to take over Monsanto.

In the policy arena, two issues stand out. The narrower one relates to reciprocity: Chinese firms are pretty much free to buy companies in any sector in Europe, without restriction; foreign firms by contrast are barred from investment or majority control in a host of sectors in China, including banking, insurance, telecom, media, logistics, construction, and healthcare. One potential solution is to include reciprocity provisions in the EU-China bilateral investment treaty now under negotiation.

The broader question for Europe is whether some broader geopoliti- cal strategy lies behind China’s outward investment surge, and if so what to do about it. There can be little doubt that in recent years China has increased its political leverage in Europe, and has done so via a “divide and rule” approach of dealing as little as possible with the EU as a whole and as much as possible with individual states. Another tactic has been to create new multilateral forums in configurations favorable to China, the most prominent example being the “16+1,” which consists of 16 central and eastern European nations plus China. Beijing has tried—so far with- out success—to develop similar forums with the Nordic and Southern European countries.

Anxiety along the Belt and Road

A related issue is to what extent Europe should welcome Chinese investment that comes in the form of infrastructure spending. Part of China’s “Belt and Road Initiative” is about increasing connectivity between China and Europe, and this comes with clear financial benefits: China has pledged, for instance, to contribute to the European Commission’s European Strategic Infrastructure Fund; and Chinese-led logistics platforms such as Athens’ Piraeus Port are proliferating.

But with increased connectivity comes an increased flow of Chinese goods—and especially a flood of low-priced products from China’s excess capacity industries such as steel and building materials. In response to the apparent dumping of Chinese industrial goods in Europe, the European Parliament on May 12 adopted a non-binding but pointed resolution asking the European Commission to reject China’s claim to “market economy status” in the World Trade Organization (WTO). That status—which China says should come to it automatically in December this year under the terms of its 2001 WTO accession—would make it much harder for the EU to impose anti-dumping duties on Chinese imports. The Commission now faces the delicate choice of accepting China’s claim (to the detriment of European producers) or rejecting it (an action that is likely to invite some form of economic retaliation from Beijing). A possible middle way would be to recognize China’s market economy status but to carve out a set of exceptions to protect key European industries. However this dispute plays out, it will simply mark the beginning of a long and complicated relationship between Europe and its fastest-growing investor.