College access for low-income students is back in the news this week with a White House summit (postponed from last month) on higher education.  Tomorrow’s summit follows a November announcement that First Lady Michelle Obama is going to be a key advocate for the President’s higher education agenda, with a focus on encouraging and supporting low-income students to enroll and succeed in college.

News reports indicate that the White House effort will focus on preventing undermatching, i.e. students attending less challenging colleges than their academic credentials would allow them to.  This behavior is troubling not because it happens at all but because it disproportionately occurs among disadvantaged students.  In our 2009 book, Bill Bowen, Mike McPherson, and I examine data on a cohort of North Carolina high school seniors who have test scores and grades that give them a 90% or better chance of being admitted to a selective university.  Among students from high-income families, only about a quarter (27%) undermatch by attending a less selective college.  But among lower-income students, a clear majority (54-59%) undermatch.  Our work and other studies show that students who undermatch are less likely to graduate from college.

This research indicates that very high-achieving students—of any socioeconomic group—should generally go to the most selective institution that will admit them.  The elite institutions that will likely admit these students are in a class of their own in terms of available resources for financial aid, instruction, and student support.  For low-income students, these colleges will generally cost them and their families less than a less-selective institution with a lower sticker price but fewer resources for financial aid.  Important recent research by Chris Avery, Caroline Hoxby, and Sarah Turner discusses the scale of this issue and proposes a highly cost-effective informational intervention.

But what about colleges and universities outside of the most elite?  The figure below shows that selectivity, as measured by average SAT/ACT scores, is consistently associated with six-year graduation rates. But outside the most elite colleges, there is significantly more variation in outcomes.  For example, the most selective colleges—those with average SAT/ACT scores above 1400—all have graduation rates above 80%, with most above 90%.  But colleges with average scores around 1100 vary widely in terms of student success, with graduation rates ranging from below 40% to almost 80%.  Students considering colleges like these will clearly want to consider more than just selectivity, including measures of quality as well as cost. 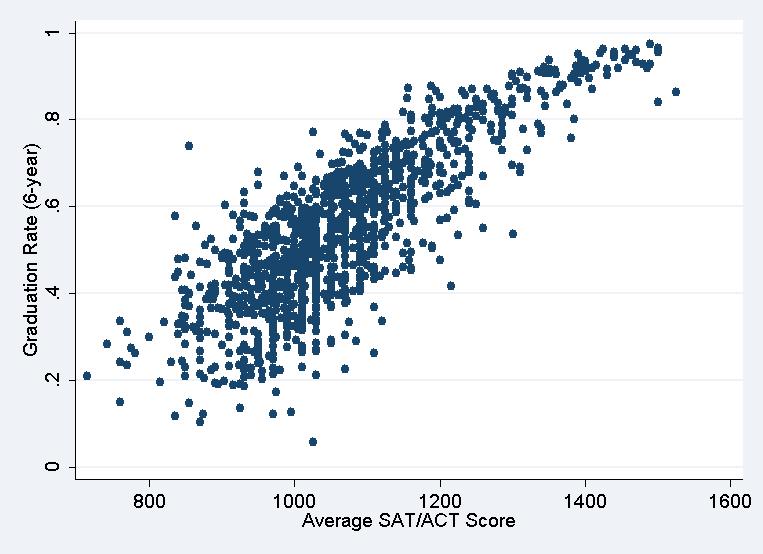 This discussion so far has tackled the question of college choice from the perspective of an individual student.  Students should attend the highest quality college they can afford (and think is worth the price), but from a system-wide perspective it is clear that all institutions cannot become more selective.  Moving an undermatched student to a match college improves the expected outcomes for that student, but likely displaces another student and hurts his outcomes.  But if students are better matched in general, could that improve educational attainment overall?

I address this question using crude simulations in an essay in Andrew Kelly and Mark Schneider’s 2012 volume on the completion agenda in higher education.  I use nationally representative data to simulate what might happen to bachelor’s degree attainment if all students attended colleges based only on their test scores and high school grades.  In other words, I “assign” students with the best grades and scores to the most selective colleges, the students with the next best credentials to the next selectivity group, and so on.  I then predict students’ simulated chances of graduating from the assigned colleges, allowing the relationship between graduation rates and selectivity to be different for students from different socioeconomic backgrounds.

I find that the percentage of students who earn a bachelor’s degree barely budges.  In the actual data it is 32.8% and in my simulation it is 33.0%.  There are two primary reasons for this result.  First, low-SES students are disproportionately unlikely go to college at all, and even less likely to have the qualifications necessary for admission to a selective university.  Consequently, improving the graduation rates of those who do go to college does not have a very large impact on the overall rate.  The number of undermatched students simply isn’t large enough in the context of the entire education system.

Second, reshuffling students across colleges means that some gain but others lose.  Low-income students appear to benefit more, on average, than high-income students from attending selective colleges, so college match is not exactly a zero-sum game.  But replacing one student with another likely produces gains for the previously undermatched student that are partially offset by losses for the other.  If I modify the simulation to relax this constraint by allowing the percentage of students attending selective colleges to increase by 20% (i.e. if these colleges were to decide to admit more students), the simulated attainment rate only increases to 33.2%.

Fixing undermatching is still a laudable goal.  My simulations indicate that it would decrease disparities in educational attainment by socioeconomic status (SES).  For example, the gap in bachelor’s degree attainment between low- and middle-SES students (after adjusting for test scores and high school grades) falls from 8 to 6 percentage points, and the gap between high- and low-SES students falls from 27 to 21 points.  At the extreme end of the selectivity range, there is also an argument to be made that graduates of elite institutions—many of whom go on to hold important leadership positions in society—ought to be drawn from as diverse a group of student backgrounds as is possible.

But the stubborn fact remains that efforts to address undermatching are unlikely to make much progress toward President Obama’s goal that the U.S. lead the world in the share of college graduates by 2020.  Moving the needle on bachelor’s degree attainment will require efforts that improve the performance of the entire higher education system rather than reshuffling students across existing institutions.

One promising strategy is the collection and provision of better information to students on colleges so that the majority of students, who are not eligible for admission at the wealthiest colleges in the country, can choose a college based on good information on both quality and costs.  As I have written previously, the Obama administration could make a significant contribution in the coming years by revamping federal higher education data collection efforts, regardless of whether those efforts are part of the proposed college ratings system.

Upgrades to higher education data systems should focus on the multi-dimensional nature of college quality and recognize the different missions of different types of institutions.  In that regard, the term “undermatching,” now just over four years old, may have outlived its usefulness because it implies that some colleges are better than others.  Of course it is true that some colleges provide a better education than others, but it’s doubtful that any single ranking of colleges could be useful to more than a trivial share of students.