In this policy proposal — part of The Hamilton Project‘s 15 Ways to Rethink the Federal Budget — Karen Dynan examines the design of government incentives for personal savings, outlining how reforms to these programs would improve saving and economic security for low-income households and reduce expensive and ineffective federal subsidies for high-income households. 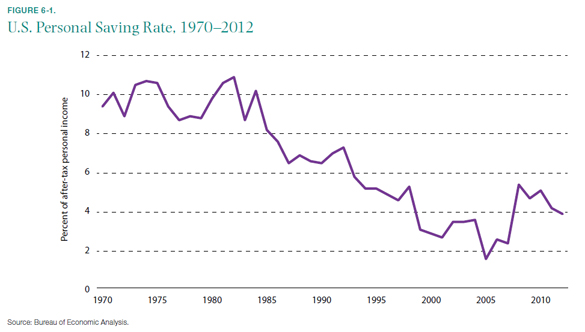 Increasing personal saving in the United States is a desirable policy goal. To be sure, over the near future there would be a downside to households saving more because that means they would be spending less, and, in turn, the economic recovery would not be as strong as it otherwise would be. But, over the longer run, higher personal saving would lead to stronger economic growth. The correlation between a country’s saving rate and its investment rate remains large and significant despite the globalization of international capital markets (Obstfeld and Rogoff, 2000). Hence, higher personal saving in the United States should increase investment in this country, which, in turn, should raise our capital stock and our productive capacity.

In addition to promoting higher personal saving in the aggregate, policy also should encourage higher saving among individual households. Households need savings in order to cope with unforeseen disruptions to their income and unanticipated consumption needs. Having such reserves is even more important now than it was in the past because household income volatility has trended upward amid ever-more-competitive and dynamic labor markets: recent research has found that the share of households experiencing a 50 percent plunge in income over a two-year period climbed from about 7 percent in 1971 to 10 percent in 2008 (Dynan, Elmendorf, and Sichel 2012). Moreover, as policymakers look for ways to reduce growing budget deficits, they may cut social programs so that the need for households to have precautionary reserves may be even higher in the future.

Saving also provides households with opportunities. Funds accumulated through saving can be used to pay for college tuition and to purchase big-ticket items such as cars and homes. Saving is likely even more important to attaining homeownership than it was in the past, given the greatly reduced availability of low-down-payment mortgages in the wake of the recent mortgage crisis. In addition, saving puts some households in a better position to establish businesses.

Finally, higher saving is important to households because it means that they will enjoy a better standard of living in retirement. Although most people can expect to receive social security benefits when older and many will receive regular payouts from defined benefit pensions, these sources of income are generally not sufficient to make up for the step down in earnings that occurs at retirement. As a result, many older households will need to supplement pension income with accumulated wealth if they wish to maintain the consumption levels they had when younger. Encouraging adequate retirement savings among lower-income households is particularly important given the available evidence suggesting that these households are much more likely than other households to experience a material drop in their consumption at retirement (Hurst 2008). The possibility of austerity-driven cuts to programs that help older Americans makes the issue even more pressing.