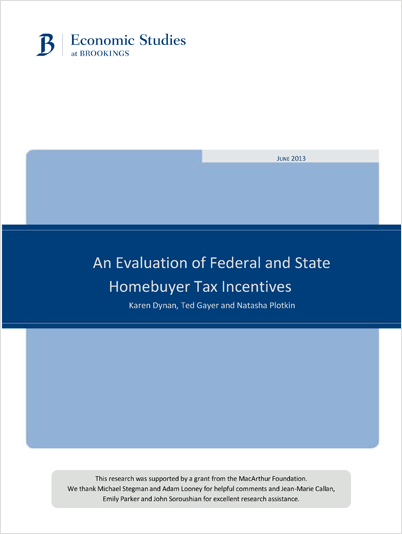 The various tax and incentive programs designed to help arrest the collapse of the housing market during the Great Recession provided, as expected, a modest short-term boost to housing demand, but some of these effects were reversed after the expiration of the credits, according to this new research paper by Brookings Economic Studies Co-Directors Karen Dynan and Ted Gayer, along with coauthor Natasha Plotkin.

The homebuyer tax credits included in the Housing and Economic Recovery Act (HERA) in 2008, the American Recovery and Reinvestment Act (ARRA or “stimulus”) of 2009, and the Work, Homeownership and Business Assistance Act (WHBAA) of 2009-2010 were projected to cost American taxpayers a total of $22 billion. The programs were intended to stimulate housing demand and thus reduce inventories and encourage new home construction.

Dynan and Gayer find that almost immediately after the ARRA homebuyer tax credit was passed, the rapid deterioration in housing market conditions came to an end, but argue that it is difficult to draw too strong a tie between the homebuyer tax credits and the change because they were part of a much larger macroeconomic package (ARRA, quantitative easing, bank stress tests, a buoyant stock market), plus other government housing programs (foreclosure prevention initiatives and refi programs). They do find that the ARRA and WHBAA homebuyer tax credits did at least modestly stimulate home sales in the short-term and had some impact on home prices, permits, and starts.

Dynan and Gayer found that HERA was the least effective program of the three, namely because it was essentially an interest-free loan to homebuyers. They also conclude that the purchases of the repeat homebuyers did not generally represent additional housing demand. In addition, following the end of the WHBAA program, any gains from the program partially reversed.

Looking at states with complementary homebuyer assistance programs, the authors found that sales were about 2 percentage points higher during the months for which the program was in place and that prices were boosted by a small amount compared to states without specific homebuyer programs; however, the programs appeared to have no permanent effect on sales, nor any immediate effects on home construction.

In terms of lessons for future policymaking, Dynan and Gayer write: