The debate surrounding net energy metering (NEM) and the appropriate way to reform this policy is under scrutiny in many U.S. states. This is highly warranted since NEM policies do indeed need reforming because NEM often results in subsidies to private (rooftop) solar owners and leasing companies. These subsidies are then “paid for” by non-NEM customers (customers without private rooftop solar installations). The fundamental source of the NEM subsidy is the failure of NEM customers (customers with private rooftop solar installations) to pay fully for the grid services that they use 24/7. These subsidies are well-documented and underpin much of the regulatory reform efforts underway across the United States.[1]

In a recent Brookings paper, “Rooftop solar: Net metering is a net benefit,” Mark Muro and Devashree Saha contend that net metering is a net benefit for non-NEM customers.[2] I fundamentally disagree with their findings, and argue that NEM is not a net benefit; it is, in fact, a tariff that much of the time results in a subsidy to NEM customers and a cost shift onto non-NEM customers. As Executive Director of the Institute for Electric Innovation, a non-lobbying organization focused on trends in the electric power industry, I have followed this debate and written about it for several years.

Much of the talk about NEM focuses too often on the “value” of the energy that is sold back to the grid by a NEM customer. In reality, the amount of energy sold back to the grid is relatively small. The real issue is the failure of NEM customers to pay fully for the grid services that they use while connected to the grid 24/7, as shown in Figure 1.[3] Customers need to constantly use the grid to balance supply and demand throughout the day, and the cost of these grid services can be sizeable. In fact, for a typical residential customer in the United States with an average electricity bill of $110 per month, the actual cost of grid services can range from $45 to $70 per month–however, the customer doesn’t see that charge.[4] That means, in the extreme, if a customer’s energy use “nets” to zero in a given month because the customer’s private solar system produced exactly what the customer consumed, that customer would pay $0 even though that customer is connected to the local electric company’s distribution grid and is utilizing grid services on a continuous around-the-clock basis.[5] 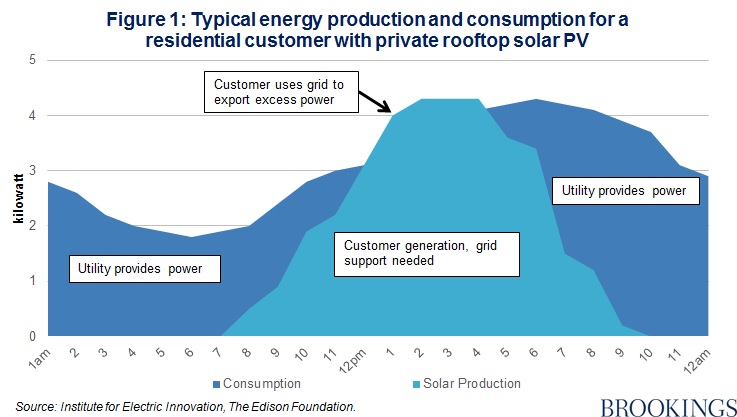 Although exactly netting to zero energy in a month is highly unlikely, this example demonstrates the point that the customer would pay nothing, despite using grid services at a cost ranging from $45 to $70 per month. Over the course of one year, this customer could receive a subsidy resulting from NEM of between $540 and $840. Over the life of a private rooftop solar system, which ranges from 20 to 25 years, this is a significant subsidy resulting from NEM.

Granted, this is an extreme example, and most NEM customers will pay for some portion of grid services. However, the fundamental source of the NEM subsidy is the failure of NEM customers to pay fully for the grid services that they use 24/7, and the cost of these services can be quite substantial. When a NEM customer doesn’t pay for the grid, the cost is shifted onto non-NEM customers.[6] It is a zero-sum game; plain and simple. This is the elephant in the room.

This issue was directly addressed by Austin Energy when the company implemented a “buy-sell” arrangement for the private rooftop solar customers in its service territory. The rationale for the buy-sell approach is that the customer buys all of the energy that is consumed on-site through the electric company’s retail tariff and sells all of the energy produced by their private rooftop solar system at the electric company’s avoided cost. This addresses the “elephant in the room” because, by buying all energy consumed at the retail tariff, the customer does pay for grid services that are largely captured through the retail tariff. It is an unfortunate fact that under ratemaking practices today in the United States, the majority of fixed costs (i.e., grid and other costs) are captured through a volumetric charge.

Hence, I fundamentally disagree with the Muro/Saha paper–NEM does need to be reformed. NEM is not a net benefit; it is a tariff that the much of the time results in a cost shift onto non-NEM customers. One of the first studies to quantify the magnitude of the NEM subsidy was conducted by Energy+Environmental Economics (E3) for the California Public Utilities Commission (CPUC) in 2013. There was no mention of this analysis for the CPUC in the Muro/Saha paper. The E3 study estimated that NEM would result in a cost shift of $1.1 billion annually by 2020 from NEM to non-NEM customers if current NEM policies were not reformed in California.[7] A cost shift of this magnitude–paid for by non-NEM customers–was unacceptable to California regulators. As a result, California regulators set to work to reform rates in their state; many other states followed suit and conducted similar investigations of the magnitude of the NEM subsidy.

In reviewing NEM studies, Muro and Saha chose to focus on a handful of studies that show that net metering results in a benefit to all customers. In this small group of NEM studies, they included a study that E3 conducted for the Nevada Public Utilities Commission (PUC) in 2014–perhaps the most well-known and cited of the five studies included in the Muro/Saha paper. Very soon after the E3 Nevada study was published, the cost assumptions for the base-case scenario which showed a net benefit of $36 million to non-NEM customers (assuming $100 per MWh for utility-scale solar) were found to be incorrect, completely reversing the conclusion. The $36 million benefit associated with NEM for private rooftop solar turned into a $222 million cost to non-NEM customers when utility-scale solar was priced at $80 per MWh.[8] Today, based on the two most recent utility-scale contracts approved by the Nevada PUC, utility-scale solar has an average lifetime (i.e., levelized) cost of $50 per MWh, meaning that the NEM cost shift would be far greater today. In February 2016, the Nevada PUC stated that “the E3 study is already outdated and irrelevant to the discussion of costs and benefits of NEM in Nevada…”[9] Hence, because the E3 study for the Nevada PUC that the Muro/Saha paper included has been declared outdated and irrelevant to the discussion and because costs for utility-scale solar have declined significantly, that study does not show that NEM provides a net benefit.

No doubt there is an intense debate underway about NEM for private rooftop solar, and much has changed in the past two years in terms of both NEM policies and the growth of private solar projects:

By focusing on a select group of studies that show that NEM benefits all customers (as stated by the authors); by excluding the E3 study for the CPUC which was fundamental to the NEM cost shift debate; and by not providing an update on the NEM debate today, I believe that the Muro/Saha paper is misleading.

In the second part of their paper, Muro and Saha suggest some helpful regulatory reforms such as moving toward rate designs that “can meet the needs of a distributed resource future” and moving “toward performance-based rate-making (PBR).” Some electric companies have already implemented PBR or some type of formula rate and PBR is under discussion in several states.[10] Lawrence Berkeley National Labs is looking closely at this and related issues in its Future Electric Utility Regulation series of reports currently underway.[11]

Mura and Saha also suggest decoupling as a way forward–I disagree. In my view, decoupling is a not solution for private rooftop solar. Revenue decoupling is currently used to true-up revenues that would otherwise be lost due to declining electricity sales resulting from electric company investments in energy efficiency (EE). Decoupling explicitly shifts costs from participating EE customers to non-participating EE customers causing the same cost-shifting problem that is created by NEM. However, a fundamental difference is that the magnitude of the cost shifting onto non-NEM customers is on a much larger scale than the cost shifting due to EE. A recent study revealed that decoupling rate adjustments for EE are quite small–about two to three percent of the retail rate.[12] In contrast, as described earlier in this paper, a NEM customer could shift a significant cost onto non-NEM customers (and the NEM cost shifting is essentially invisible to customers, which is one reason that NEM customers do not believe they are subsidized).[13]

No doubt, the electric power industry is undergoing a period of profound transformation–our power generation resource mix is getting cleaner and more distributed; the energy grid is becoming more digital; and customers have different expectations.[14]

Collaboration, good public policy, and appropriate regulatory policies are critical to a successful transformation of the power sector. In the context of this paper, this means reforming NEM so that private rooftop solar customers who use the energy grid pay for the grid. One straightforward approach is to require NEM customers to pay a higher monthly fixed charge thereby reducing the cost shift.[15] Ultimately the challenge is to make the transition of the electric power industry–including the significant growth in private rooftop solar and other distributed energy resources–affordable to all customers.

Lisa Wood is a nonresident senior fellow in the Energy Security and Climate Initiative at Brookings. She is also the executive director of the Institute for Electric Innovation and vice president of The Edison Foundation whose members include electric companies and technology companies.

[5] Wood and Borlick, The Value of the Grid to DG Customers.

[6] An example of the size of the NEM subsidy is shown in Borlick and Wood, Net Energy Metering: Subsidy Issues and Regulatory Solutions, Executive Summary.

[13] Also, the amount of cost-beneficial EE is limited because the more you achieve, the less cost-beneficial the next increment of energy savings becomes. This “diminishing return” aspect means that EE increases only when it makes economic sense. In contrast, no such economic limit applies to NEM.