Editor’s Note: This version references a past event held at the Brookings Institution.
The original version can be found on the Huffington Post.

Opacity still prevails in how natural resources are managed. This conspires against economic development. The lives of over a billion citizens could be transformed if their governments managed their oil, gas and minerals in a more open, accountable manner. This emerges from the Resource Governance Index, released by the Revenue Watch Institute at an event at Brookings last week.

The Index measures the transparency and accountability in the oil, gas and mining sector of 58 countries.  Together these nations produce 85 percent of the world’s oil, 90 percent of diamonds and 80 percent of copper, generating trillions of dollars annually.  The in-depth analysis finds that over 80 percent of the countries fail to meet satisfactory standards in how their natural resources are governed. In these nations, opacity, corruption and weak processes keep citizens from fully benefiting from their countries’ resource wealth, revealing a significant ‘governance deficit’.

There is hope, however. Some countries prove it is possible to lift the veil of secrecy and meet higher standards of transparency and accountability.  Eleven out of the 58 countries received satisfactory scores overall, including emerging economies in Latin America.  By shedding light on reforming states as well as lessons and solutions, we can reject the tired notion of the deterministic ‘resource curse’.

Each country, from the highly ranked Norway, Brazil and United Kingdom to the poorly performing Turkmenistan and Iran, is judged on four criteria: legal framework, transparency levels, checks and balances, and the broader governance context.  Most of the worst performers depend almost exclusively on revenues from natural resources as their main source of income, implying that transparency and accountability is largely missing where it is needed the most (Figure 1).  And the Middle East and North Africa, the most resource-dependent region, is the worst performing. 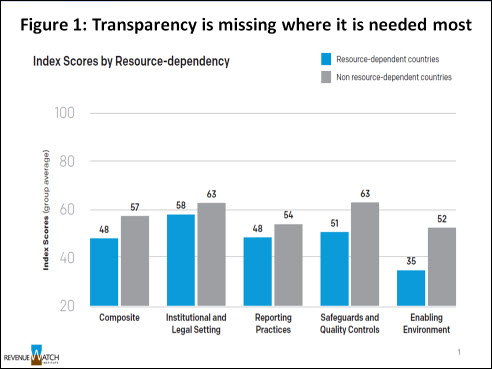 Key American allies are among the poor performing countries. Saudi Arabia ranks 48th out of 58 with failing scores on all four components. Afghanistan, which has received billions in aid from the U.S. and sits atop an estimated $3 trillion of minerals, performs poorly. U.S. companies invest heavily in the oil sectors of poorly rated countries, Angola and Equatorial Guinea.  At the same time, our study also finds that wealth is no guarantee for attaining openness and accountability in natural resources as illustrated by Qatar, ranked 54th out of 58.

In fact, there is room for improvement in every nation, including wealthy nations. Canada, the U.S. and Australia also need to ensure their multinational companies do not facilitate the opacity found in many countries where they operate.

Improved management of natural resources could make a major difference in the economic development of many countries. In Nigeria, oil revenues were 60 percent higher than total aid to sub-Saharan Africa in 2011. In Libya, the Central Bank’s $65 billion in reserves are quickly depleting to pay for the government’s deficit spending. Equatorial Guinea has a higher average per capita income than the U.K., yet three-fourths of its population lives under the poverty line.

The Index also assesses 45 state-owned oil and mining companies and 23 natural resource sovereign wealth funds according to their levels of transparency and accountability. Industry heavyweights Statoil, Pemex and Petrobras exhibit high rankings, while the national oil companies of Turkmenistan and Myanmar rank at the bottom. The sovereign wealth funds of Kuwait, Libya and Qatar, which hold an estimated $476 billion in total assets, score among the bottom five.

Improved governance in natural resources is arguably the development challenge of the decade. The stakes are high, so now is the time to act.  The annual gathering of the Extractive Industries Transparency Initiative (EITI) is now starting in Sydney, Australia, and in a few weeks the G-8 is holding its summit in Lough Erne, U.K.  Government, industry and civil society leaders have an opportunity to advance the reform agenda.

The analysis of our report points to some concrete reforms that are sorely needed, and where EITI and the G-8 could help propel the agenda forward.  Specifically:

Ultimately, the responsibility for improving governance rests mostly with each country, its leadership, companies and civil society.  Yet these global initiatives can have a major catalytic effect in supporting reforms at the country level.