A brawl among legislators in Taiwan’s legislative chamber on August 2 underlined the practical, political, and even emotional challenges of energy security for the island. The legislators were fighting over plans for a public referendum on the Fourth Nuclear Power Plant (4NPP), which is currently the focus of the energy security challenge in Taiwan―but the problem extends far beyond this single issue.

Taiwan depends on imports for near 98 percent of its energy consumption, and almost all of that is fossil fuels from turbulent areas such as the Middle East. This creates not only strategic vulnerability, but also economic risks. Energy imports increased from 3.88 percent of Taiwan’s GDP in 2002 to 14.55 percent in 2012. Most people, however, do not feel the severity of the situation as two national own companies control the retail energy price as part of Taiwan’s economy stabilization strategy. The frozen electricity price has induced significant losses for the Taiwan Power Company (Taipower) with NT$1,341 billion (around US$45 billion) accumulated liability at the end of 2012.

As is illustrated in Figure 1, below, Taiwan has almost zero energy endowment, and relies on imports for nearly 98 percent of its consumption. It produces a very small amount of power from renewable sources such as solar, biomass and hydropower. Among the imports, 8.32 percent is nuclear fuel and more than 90 percent is fossil fuels (i.e. oil, gas and coal); most oil and gas comes from the Middle East.

Figure 1: Energy Supply in Taiwan (by form of energy) 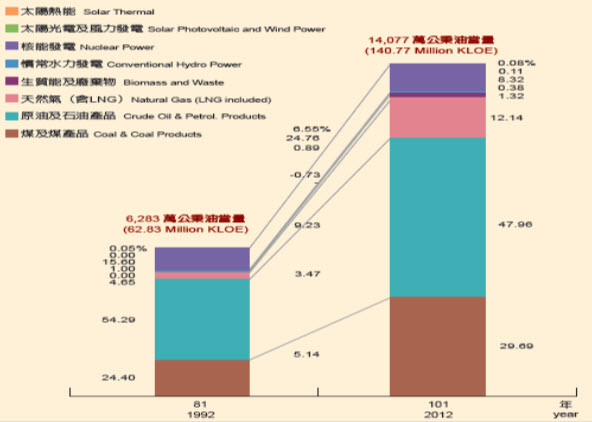 Relying on imported fossil fuels for 90 percent of its energy mix produces a drag effect on Taiwan’s economic development―particularly in recent years when international fossil energy prices have increased rapidly. Energy imports as a share of total imports increased from 10.28 percent in 2002 to 25.41 percent in 2012, and as noted above increased from about 4 percent of GDP over 14 percent in this same period. The rapid increase of imported energy cost has been partially absorbed by the two state-owned power companies, at significant loss. The debt ratios of Taipower and the Chinese Petroleum Corporation (CPC) were as high as 82.6 percent and 71.9 percent, respectively, at the end of 2012. The accumulated liability in the end of 2012 for CPC was NT$614 billion (around US$20 billion),[1] and for Tai-power was NT$1,341 billion (around US$45 billion).[2] Table 1, below, indicates the growth in liability and debt ratio for CPC and Taipower over the past five years.

These poor financial reports are pushing the government to loosen energy price controls in October 2013 (after an aborted attempt to do so in early 2012), which will create higher production costs for most manufacturers, and deteriorate Taiwan’s economic performance.

Furthermore, it is expected that the Taiwan government may eventually decide to abandon the controversial fourth nuclear power plant. This will break Taipower, as all capital expenditures on the power plant to date―NT$283 billion, or around US$9.5 billion―will turn into debt. The company’s total debt will increase to NT$1624; Taipower’s assets are also NT$1624, meaning its debt ratio will be 100 percent. In short, Taipower will bank out if the fourth nuclear power plant is abandoned.

Energy technology enhancement is the key way to solving energy problems around the world. Most countries try to upgrade their energy efficiency, and develop energy substitution technologies and emission-cutting technologies. Taiwan, however, lags behind its peers in most of these areas. Technologies such as carbon capture and storage (CCS) remain in early stages of study.

Obviously, whether the severe situation described above improves or turns into an immediate crisis depends on both the effectiveness of government policies and some external factor such as economic, social, environmental, and geographic conditions. To improve the poor energy situation, some environmental groups advocate strategies for zero growth in the electricity demand rate and a future energy mix comprising 100 percent renewable energy sources. Although advocates of these two goals dominate the debate about energy usage and supply in Taiwan, neither is very realistic. The following section illustrates energy use trends in Taiwan starting with an examination of possibilities for zero growth in electricity demand, and also assesses Taiwan’s energy supply trends to investigate possibilities for 100 percent renewable energy in the future.

The Bureau of Energy (BOE) in the Ministry of Economic Affairs (MOEA)[4] recently announced preliminary research results indicating that it is impossible to reach the aim of zero electricity demand growth rate before 2030. Although the BOE acknowledges that more data collection and analysis are required before conclusions can be finalized, there are two reasons that the preliminary conclusions are correct. First of all, Taiwan’s economic structure is based on international trade,[5] and more than half of electricity consumption in Taiwan comes from trade-related production activities. The relative shares of energy use in the industrial and service sectors in 2012 were 53.21 percent and 19.47 percent respectively. Figure 2, below, demonstrates that Taiwan’s export composition is trending toward greater reliance on heavy industry, which consumes more energy than other sectors and which accounted for 72 percent of total exports in 2001, 82 percent in 2006, and 83 percent in 2011. Since this energy-intensive economic structure can only be adjusted in the long run, it will be very difficult to achieve meaningful reductions in energy consumption in the near future.

The relatively low price of electricity is another problem, as it gives people and companies in Taiwan little incentive to cut their electricity usage. Many experts working in energy service companies (ESCO) complain that many firms prefer to use the old and less efficient machines since already-low energy prices mean that savings from more efficient usage are small to cover the cost of replacing old machines. In sum, the economic and political imperative to continue to grow the economy and the lack of incentives to reduce electricity usage make it difficult to halt growth in electricity demand from the perspectives of either long term economic structure change or short term fair price adjustment.

Many people in Taiwan hope that development of renewable energy will solve the island’s energy problem, and environmental groups are pushing the government to pursue the 100 percent renewable energy use in the future. In 2012, the relative share of renewable energy accounted for only 1.89 percent of Taiwan’s total energy supply; biomass and waste accounted for 1.32 percent, conventional hydro power 0.38 percent, solar photovoltaic (PV) and wind power 0.11 percent, and solar thermal 0.08 percent (see Figure 1). Among renewable sources, the Taiwan government currently prioritizes wind and solar power, but both face development obstacles.

The development of solar power is also problematic. The generation cost of solar PV power is two to three times that of fossil energy. People in Taiwan are unlikely to accept yet another increase in electricity prices that a shift to solar power would entail. As with wind power, land limitation is another constraint for building more solar PV.

Except for wind, solar, hydro-power (which accounts for a very small share), most of the other potential sources of renewable energy remain in the research or demonstration stages. Ocean energy and deep geothermal energy are two sources that could be beneficial for Taiwan, but they need to be developed.

In brief, the poor economic, environmental and geographic conditions in Taiwan limit the possibilities for renewable energy, and it will be all but impossible to reach the aim of 100 percent renewable energy use before 2050.

While many advocates propose impractical and even naïve solutions, to its credit the government has proposed some more realistic policies. To deal with the current severe situation, it has developed an energy strategy based on security, efficiency and environment.

Multiple energy use and diversified energy imports from a variety of energy exporting countries is the main strategy to ensure a reliable energy supply. In pursuing this strategy, the government must break through the familiar diplomatic barriers to sign bilateral agreements and join international cooperation frameworks. Domestically, an energy storage and transportation strategy is also emphasized. For example, while the quantity required for the strategic reserve has been 90 days’ consumption for oil and 30 days for coal, 15 days for gas has been required by the government in recent years.

Accelerating the development of low carbon technology and increasing carbon reduction capacity are two ways to enhance energy efficiency. Low carbon technology for traditional fuels (i.e. oil, coal and gas) can allow the carbon contained by the fuels to be burned more completely; thus the same volume of fuel produces more heat and power.  Moreover, carbon capture and storage (CCS) technology is being researched, and the capacity of natural gas power plants to reduce carbon emissions is being increased. The government also offers financial aid and technology to private ESCOs for upgrading the efficiency of their energy production process.

3. Renewable energy development for the environment

In order to enhance the technology level for renewable energy, the government has established research projects with both private firms and some research institutes. Many kinds of financial compensation are offered by both the central government and local governments. The following programs are also implemented by the BOE for promoting renewable energy usage:[6]

(B) Promote the “1000 on- and off-shore wind turbines” project: total installation capacity of wind power generation units will reach 4,200MW by 2030.

(C)  Promote the “million solar roofs” project: the implementation will start with roof installation for private homes, government buildings and all other kinds of buildings followed by ground installation. Total installation capacity of photovoltaic devices will reach 3,100MW by 2030.

More efforts are needed to enhance energy security in Taiwan

While the policies being pursued by the government are generally suitable for mitigating the current energy problems, the authors suggest that two more fundamental issues need to be addressed.

First, the main competent authority for energy issues in Taiwan is too low in the government hierarchy. The Bureau of Energy is responsible for almost all energy issues in Taiwan, but it is only a small organization under the Ministry of Economic Affairs (MOEA) with fewer than 150 employees. From our observations, many top executives in the MOEA do not have the expertise or energy experience to understand many of the crucial energy-related problems. Although the government will restructure MOEA to be the Ministry of Economic and Energy Affairs in the near future, Taiwan faces urgent energy challenges that need to be addressed immediately. These authors suggest that the National Security Bureau, Taiwan’s main intelligence agency, should also be assigned to monitor some energy issues, especially relating to possible energy disruption or drastic increased in energy prices.

Second, the energy market in Taiwan is in dire need of reform. The CPC and Taipower are entrusted with the development, generation, supply, and marketing of petroleum and electric power in Taiwan. Given their poor financial circumstances and aging equipment, however, they can no longer take all responsibility for managing the energy market. As demonstrated in early 2012, it is very difficult in the current political environment for CPC and Taipower to charge consumers prices that will cover production costs. Continued subsidized prices will not induce efficient energy usage in Taiwan and are not sustainable for CPC and Taipower. Despite the political and economic difficulties, reform and liberalization with the aim of creating a more rational and efficient energy market must be undertaken.

[1] Data collected from the CPC cooperation employee evaluation report in 2013.

[2] Data collected from the Taipower employee evaluation report in 2013.

[4] Taiwan’s government does not have a ministry-level organization devoted solely to energy questions.