Much is made of the tax rate that U.S. corporations pay (a 35% statutory rate, higher than in many other countries, though U.S. firms often take advantage of tax breaks to reduce their effective rate). But less is heard about the tax rate of “pass-throughs,” the partnerships and other businesses whose income is taxed at the same rate as personal income, primarily because there is no simple number to look up. 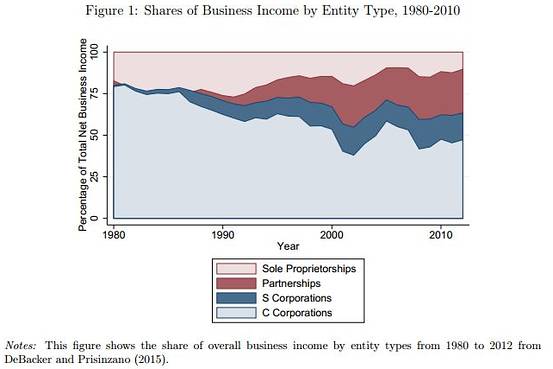 The share of overall U.S. business income by entity types from 1980 to 2012, as presented in a paper by economists with the U.S. Treasury and others at a National Bureau of Economic Research paper in Washington on Sept. 24, 2015.

So a band of number-crunching economists at the U.S. Treasury and some academic partners, with access to far more data than outside researchers can see, set out to answer two simple questions: Who is getting all this partnership income? And what tax rate do they pay? They offered their answer Thursday in a paper presented at a National Bureau of Economic Research conference in Washington.

Their major findings are surprising. They demonstrate, among other things, why reforming business taxes is so complicated and how some well-off Americans exploit the tax code to reduce their rates. Here’s a taste:

* The average federal income tax rate paid by individuals who report pass-through business income was 19% in 2011. In part, that’s because so much of that income is considered capital gains or dividends, which are taxed at preferential rates. That rate is much lower than the average rate on traditional corporations, which the authors estimate at 31.6% in 2011. And that is why so many businesses–some of them very big–have organized themselves as pass-through entities instead of traditional corporations.

* “The migration of business activity out of the C-corporate sector and into the pass-through sector has likely substantially reduced U.S. tax revenue,” the economists conclude. If pass-through activity had remained at the (low) level of the 1980s, then the average tax rate on total U.S. business income in 2011 would have been approximately 28% rather than 24%, and tax revenue would have been at least $100 billion higher.

* Even with access to tax returns, the Treasury economists couldn’t trace all partnership income to the ultimate owner or originating partnership because businesses have created such complicated mazes (often designed specifically to reduce their U.S. taxes). “Our inability to unambiguously trace 30% of partnership income … underscores the concern that the current U.S. tax code encourages firms to organize opaquely in partnership form in order to minimize tax burdens,” the economists conclude.

These findings, based on hard data far more comprehensive than in any previous work, show, among other things, why corporate tax reform is so tricky. A narrow focus on traditional corporations will be tough and counterproductive because so much business income now goes to these pass-through entities. But any tax reform that essentially seeks to lighten the burden on big corporations by raising the tax rates paid by partnerships and other pass-throughs is sure to prompt a huge political fight, led by the well-paid Americans who are enjoying very low tax rates on their business income. The research also suggests that anyone who wants to use the tax code to restrain the widening gap in income inequality–as many Democrats advocate–has to look at the way pass-through entities are taxed.

This post originally appeared in The Wall Street Journal.

The EU’s attempt to regulate open-source AI is counterproductive