Most states are now wrapping up their 2013-2014 budget cycles and apparently in good shape too. Even California, that perpetual budget laggard, is expected to end next fiscal year with a modest surplus thanks to temporary tax increases and a gradually improving national economy.

Critics are quick to point out that California’s budget is not exactly balanced given a $4.5 billion annual payment the state’s Teachers’ Retirement System says it needs to meet its obligations. Nor is California alone in overlooking these “hidden liabilities.” Taken together, state and local governments are estimated to owe up to $4 trillion more than they have set aside for pensions and retiree health care.

I’d like to focus on a different kind of transparency here. Right now, there is plenty of information on state and local government revenues thanks to numerous think tanks and non-profits that track state and local taxes or revenue burdens by state. However, the spending side of the budget remains a bit of an enigma.

Clearly, New York differs from North Dakota in what it spends each year. It also differs in its demographics, service costs, and labor market conditions. A framework I’ve been developing with co-authors sheds light on these factors and how they drive spending outcomes.

Let’s look at an example from K-12 education, states’ single largest expenditure item (excluding federal funds) and the one most popular with voters. A recent Census Bureau report confirms wide disparities exist among the states: In 2011, New York spent about twice as much per capita on public schools as Idaho (about $2,750 versus $1,150).

(Importantly, the Census report includes only spending by charter schools run by government agencies like universities, cities, counties, or public school systems – it excludes the most common type of charter school run by a private nonprofit. This is an issue for states like Arizona with a big charter school presence.)

But spending per capita is only the tip of the iceberg. States also differ in their student populations. Some (such as Texas and California) are home to more kids, while others (Texas) also have more kids enrolled in public schools, whether because of stronger compulsory education laws or more families who elect to send their kids to public versus private schools. 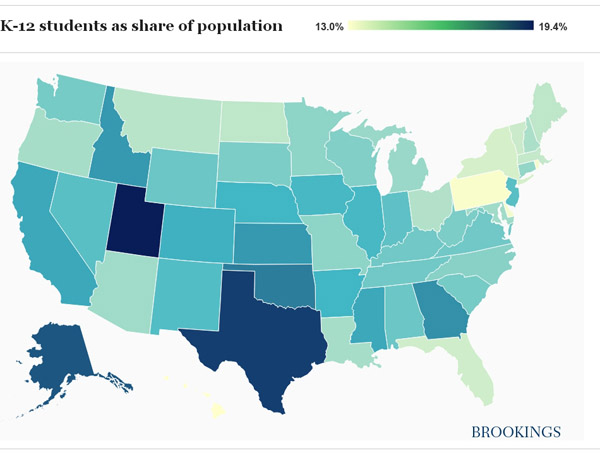 Because of its larger student population, Texas – which ranks near the national average in K-12 education spending per capita ($1,637) – is near the bottom when it comes to spending per student ($8,740). It displays a tradeoff common in many states and across many budget categories: broader participation in public programs versus lower spending per beneficiary or recipient. 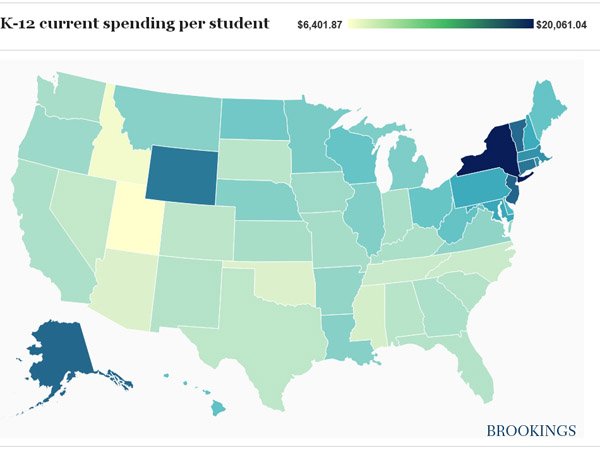 We can dig deeper by looking at where spending goes. K-12 education – like most areas of state and local government – is labor intensive, so most costs are borne in employee compensation or payroll. New York, which had few kids enrolled in public school in 2011, was able to pay among the highest K-12 education salaries and benefits ($90,000 per year) in the nation.

Salaries and benefits reflect many factors, including costs of living and amenities that differ from state to state. However, in past work I found that taking into account the premium that all employers in a state – public and private – must pay to attract employees of a given education and experience level reduces, but does not eliminate, differences in K-12 education salaries.

Higher compensation costs often translate into lower staffing ratios, or fewer full-time equivalent employees per student. For example, New Jersey, which was not far behind New York in average K-12 education salaries, had lower staffing ratios in 2011 because it also had more kids per capita than New York. California exhibited a similar tradeoff between high payroll costs and low staffing levels.

The approach used here could be extended to health care, transportation, public safety, or any area of state and local budgets. It could be augmented with performance measures, although links between spending and outcomes are not always clear. Still, this framework would be a vast improvement over current “e-budgeting” efforts, which usually amount to little more than a few charts online or documents available as pdfs.

State and local officials would do well to engage in a productive conversation about budget tradeoffs. Voters need to understand what spending arises from policy choices versus background conditions – or which levers of government can be pulled and which cannot.