This commentary originally appeared in the Providence Journal.

Rhode Islanders remain in a lousy mood. Public flare-ups over the tolling of large trucks for bridge and road repair have been a constant this winter. Sentiment expressed in surveys remains “meh.” No wonder Gov. Gina Raimondo recently took on the negativity topic directly during a discussion with reporters, saying she wants to do more to explain things to keep people from “immediately going to the small and losing sight of the big.”

Why are Rhode Islanders so skeptical? There are surely lots of reasons, ranging from several decades of passive leadership before Raimondo as well as the hangover from several public corruption scandals.

However, we would suggest that the biggest source of discontent — and a very justifiable one — can be seen in one stark chart from the recent Brookings Institution / Battelle-TEConomy Partners / Monitor Deloitte report proposing a new economic strategy for the state. 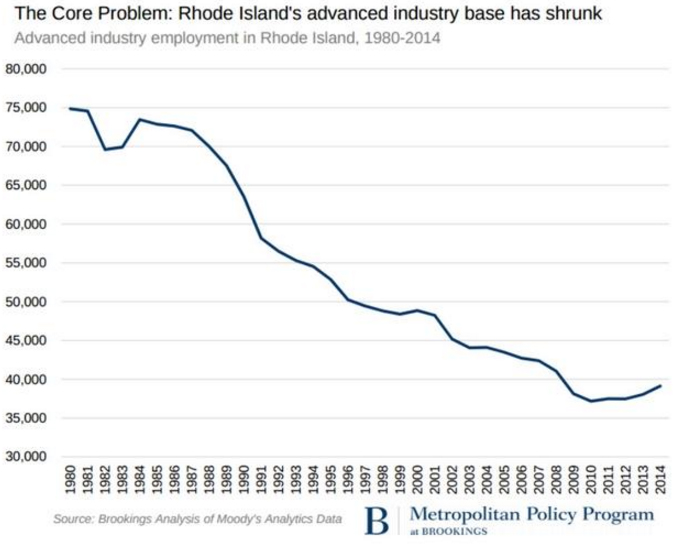 Here, what we would say is the most fundamental source of Rhode Islanders’ frustration absolutely jumps out. Over the last 25 years, only one state, Vermont, has suffered a larger proportional loss of what we call its “advanced industry” base.

Advanced industries as defined by Brookings are a group of 50 high-value industries that conduct large amounts of research and development and employ a disproportionate share of STEM (science, technology, engineering and mathematics) workers. Ranging in Rhode Island from shipbuilding and jewelry manufacturing to biotech, computer design services, and corporate management, these industries are a central determinant of regional prosperity.

And that is what has happened to Rhode Island. Rhode Island’s advanced industry base has been eroded disastrously since 1980.

Driving the decline have been catastrophic losses of manufacturing jobs, which accelerated in the last decade as the state’s labor-intensive specializations in toys, costume jewelry, and textiles proved disastrously susceptible to Chinese imports.

All of which goes a long way, we believe, to explaining why Rhode Islanders remain irritable this winter even as the economic data continues to improve. Frustration and impatience are, in fact, rational responses to the 25-year erosion of the state’s basic growth machine and source of middle-class jobs. With the state having lost so much of its advanced industry base, Rhode Island workers and entrepreneurs have lost their best opportunities, their best sources for advancement, their best sources of good paychecks. The state’s horizons have contracted.

What needs to be done to improve the state’s outlook? The answer is pretty clear: The state needs to rebuild its advanced industry base by taking actions to support the expansion of new growth centers, whether in biomedical innovation, IT, defense, design and manufacturing, or the management of companies.

In our report, we have proposed a number of action steps through which the state and its private- and civic-sector partners can expand and energize Rhode Island’s existing and emerging advanced industries. Critical, in our view, are moves to increase the scale and pace of technology innovation; upgrade the tax and regulatory environment; and improve the state’s ability to act decisively. These and other actions will restore growth and improve the state’s mood.

The question is going to be: Can the state overcome its understandable pessimism in order to come together to act?