June’s employment numbers highlight that our economic recovery is not yet on solid footing. An analysis by The Hamilton Project digs into the regional distribution of these unemployment trends and finds that, by one measure, the five hardest hit states are Alabama, Delaware, Colorado, Georgia, and Utah.

In June, the economy lost 125,000 jobs, largely due to layoffs of temporary Census employees. In the private sector, employment increased by 83,000 jobs. Thus far this year, the economy has added 882,000 jobs, with 593,000 coming from the private sector. The unemployment rate fell to 9.5 percent, but more Americans exited the labor force and the share of the population employed edged down.

Looking ahead, there are several challenges to sustained job growth. The boost to economic activity from the American Recovery and Reinvestment Act is winding down and job losses related to temporary Census workers will continue in July. Further, the four-week moving average of initial claims for unemployment insurance have hit their highest level since March and have remained above 450,000 all year.

The “job gap” underlying these numbers is daunting. In recent months, on this blog, we described the job gap — the number of jobs it would take to return to employment levels from before the Great Recession, while also accounting for the 125,000 people who enter the labor force in a typical month. After today’s employment numbers, the job gap stands at almost 11.3 million jobs.

Change in Unemployment Levels by State

Job losses resulting from the Great Recession have not been spread equally around the country. The table below lists the 10 states with the largest declines in the employment to population ratio since the recession began in 2007. This ratio measures the fraction of the working-age population that is either unemployed or out of the labor force and provides the broadest measure of the health of the labor market. The employment to population ratio includes the people who have left the labor force and thus provides a more complete picture of the labor market. 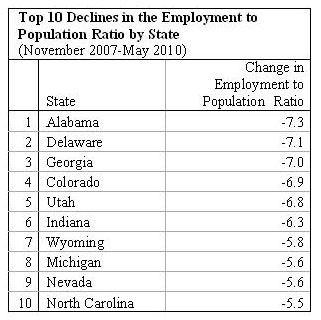 For the declines in the employment to population ratio for all 50 states, click here (PDF) »

The reasons these 10 states have been most heavily impacted vary, but a quick summary of a few – to give a sense of the challenges facing the workforce – is included below: 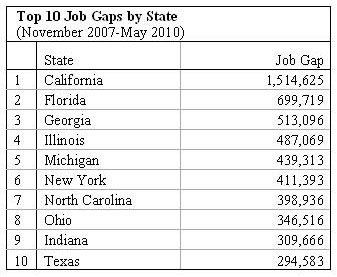 States like California and Florida have suffered significant declines in construction employment related to the housing crisis. In fact, almost every state on this list has experienced significant job loss from either the construction or manufacturing industries. According to a North Carolina Department of Commerce report released in May 2010, the state lost 32% of jobs in the construction sector and 19% of jobs in the manufacturing sector during the recession. We again see states such as Michigan and Ohio at the top of the list, where industry declines (particularly in manufacturing) have driven a worsening employment situation. Texas, which has actually experienced job growth over the recession, still faces a major job gap because the job additions have not kept pace with its growing population. At the other end of the spectrum, New England with relatively less manufacturing share and with less housing-related turmoil has fared better.

It is apparent that the Great Recession’s impacts have been more severe in some parts of the country than others, and the reasons for these impacts are diverse. As such, a variety of policy options may be necessary to help workers and communities throughout the country regain their footing. This fall, The Hamilton Project will identify a set of evidence-based policies that can aid the communities that have been hardest hit. These policy proposals will be released at an event on October 13 in Washington, DC.