Employers continued to boost payrolls in 2014, capping five years of accelerating job gains. In the 12 months ending in November, public and private payrolls increased 230,000 a month, or about 2% over the period (see Chart 1). Virtually all the growth in payrolls was in the private sector, which added 223,000 jobs a month. For the first time since 2008, however, the public sector managed to grow instead of shrink. State and local governments added to their payrolls last year, while the number of federal employees edged down.

Employment gains varied across industries, but every major sector other than the federal government added to payrolls over the year. Mining industry payrolls, spurred by the growth of energy production in the United States, rose 5.0% in the 12 months through November, and construction industry employment increased 3.6%, duplicating its performance in the previous year. In service-producing industries, professional and business service employment continued to enjoy outsized gains. Payrolls increased 3.7% in 2014, approximately the same rate of growth the industry saw in the previous 3 years.

Private payrolls in health and education continued to rise in 2014, as they have done throughout the recovery and indeed during the worst months of the 2008-2009 recession. Retail employment expanded at roughly the same pace as overall employment, while payrolls in leisure and hospitality industries increased somewhat faster. Of the large service-producing sectors, only the government sector saw employment gains that were far below the pace of total employment growth. In the private sector, payroll gains were distributed very broadly across industrial sectors.

Not all of the decline can be attributed to job gains. Some of it is due to an unexpectedly severe and persistent drop in the percentage of adults who are in the labor force. Given the shifts in the age composition of the population, we would expect some drop in the participation rate since the start of the Great Recession. Nearly every analyst agrees, however, that the 3.2 percentage-point drop in the participation rate since December 2007 is bigger than what we should expect based on changing demography. I estimate that a bit more than half the drop is traceable to the aging of the adult population. A little less than half is thus due to labor market weakness.

Many Americans who lost their jobs or wanted to enter the workforce after 2007 were unable to find work for an extraordinarily long period. In April 2010, for example, about 7 million adults reported they had been jobless and seeking work for more than 6 months. In comparison, in the severe recession that began in 1981, the peak number of long-term unemployed was less than 3 million. Many adults who have been unsuccessful in their job search stopped looking for work and thus stopped being counted as unemployed. Some of these dropouts may someday start looking for work again. Reentry into the workforce is more likely if people believe good jobs are plentiful. Millions of older dropouts have permanently left the workforce, however. Some have started collecting retirement benefits; others are now receiving disability pay. For young and middle-age workforce dropouts it is more likely that exit from the labor force is temporary rather than permanent. So far, however, there is little sign of a rebound in the participation rate, even in prime working ages when a rebound seems most likely.

One reason dropouts are staying out of the workforce is that wages have remained stuck throughout the recovery. Some analysts claimed to see an uptick in wages at the end of 2014. But in a recovery that has lasted five years, workers have seen virtually no improvement in their real hourly wage. According to the most recent BLS estimates, the real average hourly wage was the same in November 2014 as it was in December 2008. Average weekly earnings were slightly higher in 2014 compared with 2008, but the change was the result of a longer workweek.

The job market continued to improve in 2014, and the gains were widely distributed across industrial sectors. Compared with labor market developments in other rich countries, the recovery in the United States has been remarkably stable, strong, and long-lived. Nonetheless the main improvement seen by most workers is that they have found it easier to find work or to change jobs. Employees have seen little increase in their weekly pay, and the gains they have enjoyed so far are mainly traceable to a longer workweek. Judged solely by workers’ gains in wages and fringe benefits, the workplace is still a buyers’ market. Employers’ strong bargaining position has kept wage gains to a minimum and business profits high. A pick-up in wage gains has been missing so far in this recovery, and it continued to be AWOL in 2014. 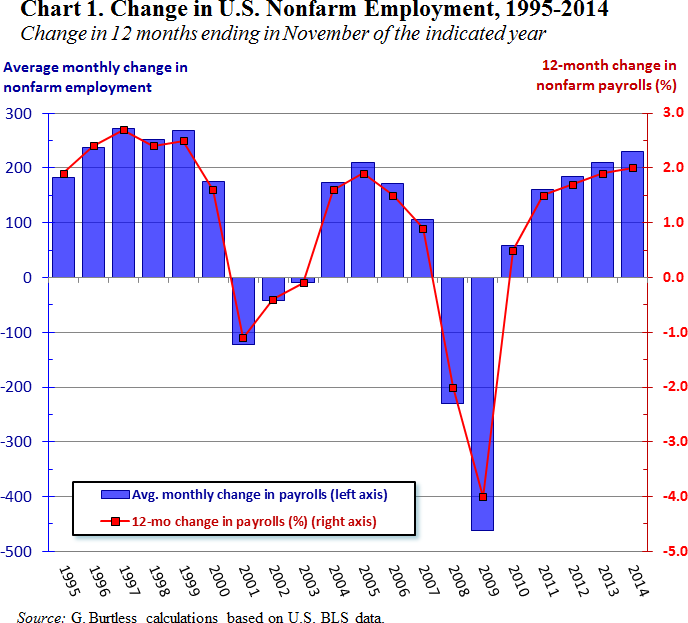