This article first appeared in the Economic Times on 27 June 2016. Like other products of the Brookings Institution India Center, this is intended to contribute to discussion and stimulate debate on important issues. The views are those of the author. Brookings India does not hold any institutional views.

India has done very little in the last few decades by way of harmonizing its governance structures to secure its energy needs despite a surging demand to fuel its growing economy, and the crisis may worsen in the coming years, Brookings India chairman Vikram Singh Mehta said at a policy discussion forum in New Delhi.

“We have done very little over the last few decades to make the policy linkages between energy-environment and climate change. We did not pay enough attention on energy infrastructure, conservation, subsidisation of LPG, and petrol. These are all policy inadequacies that contributed to the increase in demand of energy,” said Mehta, who previously served with Shell India as its CEO.

He said government policies had failed to balance the pace between surging demand and supply constraints that caused the current energy crisis in India, the fifth largest energy consumer in the world.

India is home to nearly 18 per cent of the global population but uses only six per cent of the world’s primary energy resources and the country is set for a sustained growth in energy demand with its growing economy, according to the Energy Outlook 2015.

“The energy crisis facing India is because the demand is surging and the supply is failing to keep pace with demand,” Mehta said, pointing out that the demand was due to the rising population and growing prosperity in the country.

“India has a large population. And the youth are aspirational too. We have developed and are now entering the high energy trajectory of consumption,” said Mehta, who also served as strategic planning advisor in the state-run Oil India Ltd.

He said since the current government’s policies were focused on modernization and expansion of its manufacturing sector “into higher gear” with the Make in India initiative, the country needed “to create jobs which are energy intensive”.

He also said “India is the driver of energy demand in the world” after China with India’s share in world energy demand rising by nearly 6 per cent over the last 15 years. Demand for energy for the rest of the world increased by 2.5 per cent during this period. 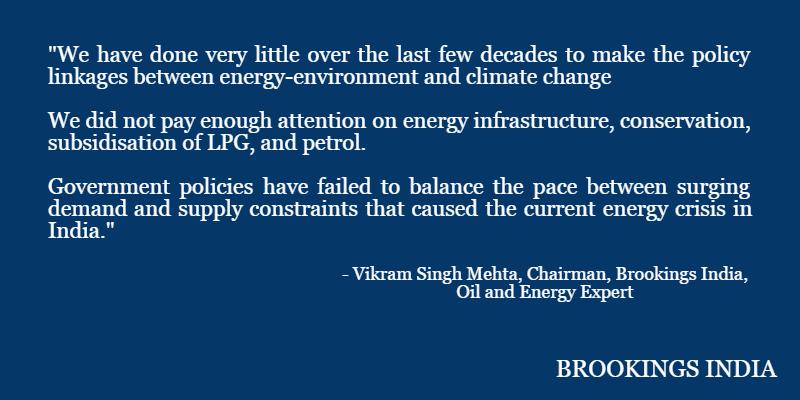 Mehta also warned that India must be ready to tackle the crisis that can get worse as countries on which “we are dependent are either in huge political or economic crisis”.

Asked if the present Bharatiya Janata Party-led government was different from the previous rule in tacking the crisis, Mehta said: “The NDA has benefited from the drop in global oil prices. Earlier oil companies were bearing the burdens of subsidies. This government and the Prime Minister in particular are aware of how technology can enhance energy security and availability..”

Net zero carbon pledges have good intentions. But they are not enough.

A low-carbon future through sector-led change