The Senate Judiciary Committee is preparing for hearings on the president’s three nominees for vacancies on the D.C. Circuit Court of Appeals.  Brewing GOP opposition to filling the vacancies comes on the heels of partisan disputes over Republican tactics to block Obama’s judicial nominations. Democrats argue that GOP tactics are unprecedented: Republicans have delayed confirmation votes even for nominees with bipartisan support, they have insisted on sixty votes for nearly every appellate court nominee before allowing confirmation votes, and they have heightened scrutiny of trial court nominees.  In contrast, Senate minority leader Mitch McConnell argues that “the president’s been treated very fairly on judicial [nominees].”

Can both parties’ claims be true?  Steve Benen argues that McConnell’s claims “have no basis in fact,” but I don’t think that’s entirely correct.  Because there is no single way to slice and dice judicial nominations data, the parties duel with rival statistics: number of confirmed judges, confirmation rates by president or by two-year Congress, bench vacancy rates, time from nomination to Senate action, and so on.  Absent a single metric, it’s tough to nail down whether Republicans have overstepped the bounds of acceptable behavior—relative to Democrats’ behavior in the past.  (To be clear, the GOP claim that Obama is creating a “culture of intimidation” by sending three nominees to the Hill to fill authorized seats on the most important of the appellate courts is ludicrous, given the president’s constitutional authority to nominate candidates for the federal bench.)

My preferred measure for tapping the state of advice and consent focuses on confirmation rates and duration of the confirmation process over each two-year Congress. (Senators and others often prefer to compare confirmation rates across presidents, but differences in party size and party control within a presidency confound interpretation of presidency-level statistics.)  Confirmation rates between 1947 and 2012 (80th-112th Congress) appear here: 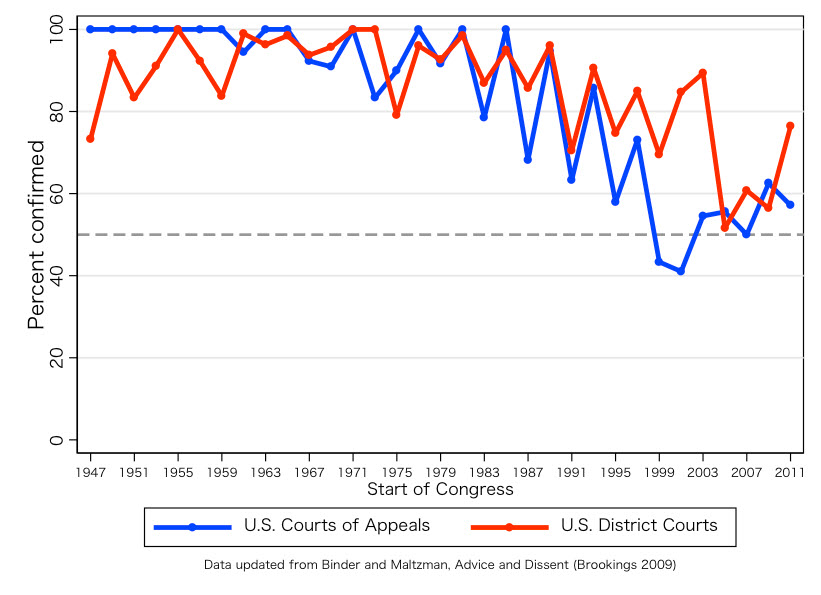 Viewing rates by Congress, we see the basis of McConnell’s claim that the GOP has played fair on Obama’s nominees: Appellate court confirmation rates were slightly higher in the 111th (2009-10) and 112th Congresses (2011-2) than they were over the course of George W. Bush Congresses (under both unified and divided party control).  And in the last Congress, GOP treatment of Obama’s district court nominees measurably improved (albeit after Senate Democrats felt compelled to file 17 cloture motions on district court nominees balled up by the GOP).  That said, GOP treatment of Clinton nominees in 1999-2000 and Democrats’ treatment of Bush nominees in 2001-2 produced the lowest confirmation rates over the postwar period.

We can also use data on how long it takes to confirm nominees (ignoring failed nominations) to compare the parties’ records.  As shown below, GOP foot dragging on Obama nominees for both appellate and district court vacancies has far outstripped Democrats’ slowdown of Bush nominees between 2003 and 2008 (under both unified and divided party control).  But these records are beat by GOP delay at the close of the Clinton administration and Democratic opposition at the start of Bush’s first term in 2001-2. 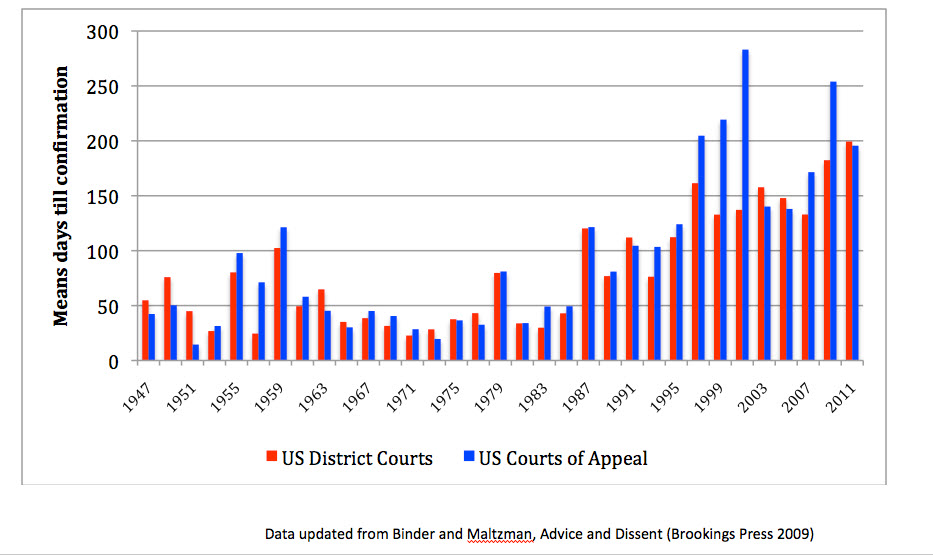 Granted, such comparisons assume that all else is equal about the nominees and the process.  That’s debatable.  Each party typically claims that they only block nominees who are ideologically out of step, but we lack a common metric for comparing nominees ideologically.  Nor do these data capture changes in the threshold for confirmation, as the GOP has insisted on sixty votes for confirming almost every appellate and some district court nominees.  Remarkably, the GOP pushed Reid to file 17 cloture motions on district court nominees in 2012, even after Senator McCain had admonished his colleagues in 2011 not to filibuster trial court nominees: “Quite often we establish precedents and you find out when you get back in the majority it wasn’t that good of an idea.”

What does this portend for the fate of the D.C. Circuit appellate nominees?  Keep in mind that in addition to the unusual policy impact of the D.C. Circuit, this court of appeals is “balanced” with equal numbers of Democratic and GOP appointed active judges.  Since the early 1990s, confirmation rates have been at least ten percent lower for nominations to balanced circuits than to circuits with a party skew.  But I suspect that many GOP senators have not yet made up their minds on these nominees, and thus there’s currently no party strategy to block them.  In the meantime, the GOP will likely look for opportunities to confirm nominees they deem acceptable (witness today’s move to confirm two district court nominees and recent votes to confirm several appellate court nominees previously blocked by the GOP in the run up to the 2012 elections).  Such cooperation allows the GOP to insist that they’ve treated the president fairly—all the while dragging out the D.C. Circuit nominees.  Given continued uncertainty over whether Democrats would be able to muster 51 votes to go nuclear this summer, I doubt the conflict comes to a resolution anytime soon.