Once upon a time, when the Federal Reserve talked about the labor market, it was almost always talking about the unemployment rate or the change in the number of jobs. But the world has grown more complicated, and Fed Chairwoman Janet Yellen has pointed to a host of other labor-market measures.

But these different indicators often point in different directions, which can make it hard to tell if the labor market is getting better or getting worse. So four Fed staff economists have come to the rescue with a new “labor markets conditions index” that uses a statistical model to summarize monthly changes in 19 labor-market into a single handy gauge.

The new index–described in a post on the Fed’s web site in May – makes its public debut in the Fed’s semi-annual monetary policy report to Congress. 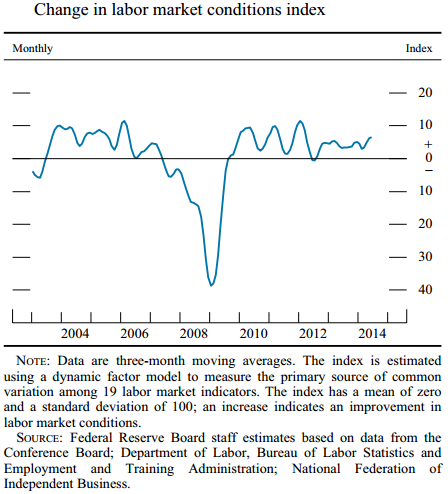 When the line is above zero, the job market is improving. When it’s below – as it was during the recession – the job market is deteriorating. So how’s the Fed reading the latest wiggle? It “suggests that labor market conditions have strengthened further this year,” the Fed says. “While increases in the index slowed a touch at the beginning of this year, partly reflecting the effects of unseasonably cold and snowy weather this winter, the pace has picked up again in recent months.”

In her testimony to Congress this week, Ms. Yellen said that “significant slack remains in the labor markets” and noted that wages are rising very slowly, all of which points to an economy which has not yet fully recovered from the Great Recession and still needs the sustenance of low interest rates.

The new index includes familiar government metrics – the unemployment rate, the fraction of the population working or looking for work, the length of the average work week, the number of people quitting their jobs – as well as private-sector surveys of help-wanted ads and consumer and business attitudes. “A single model is no substitute for judicious consideration of the various indicators. Nevertheless, such a model provides a summary that can usefully inform those deliberations,” caution the creators of the index, Hess Chung, Bruce Fallick, Christopher Nekarda, and David Ratner.